The Democrats Go Full-Speed Ahead on Impeaching Donald Trump 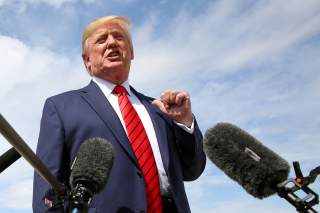 It’s far too early to tell whether the House Democrats’ impeachment inquiry will end Donald Trump’s presidency. But whatever the provenance and overall accuracy of the newly declassified whistleblower report, its contents were made possible by the unconventional way in which this presidency has unfolded.

Trump is a bull in a china shop surrounded by people who frequently try to contain and clean up after him; he has an unusually large number of subordinates who seem to actively oppose him; and he sometimes has to go outside the White House to get what he wants, recruiting freelancers like Rudy Giuliani with occasionally farcical results.

This strange combination is how Trump emerged largely unscathed from a multiyear, $32 million investigation by former FBI director and special counsel Robert Mueller yet now finds himself at the precipice of impeachment over what should have been a routine telephone call with a foreign leader. And while there remains a strong possibility that Democrats, Never Trumpers and the media are once again jumping the gun in predicting the demise of the man who survived Mueller, the “Access Hollywood” scandal, and myriad other controversies that would have doomed anyone else, this won’t go away as easily.

Democrats did not simply accuse Trump of behaving less than honorably in response to Russian interference in the 2016 election and the subsequent investigation thereof. They suspected, and often overtly alleged, that he was actively and treasonously involved with Russia’s efforts. When Mueller documented instances of the former yet was unable to prove the latter, Trump-Russia fizzled despite numerous Democratic attempts to keep the scandal alive.

It was as if the Watergate break-in had been carried out by a foreign entity without the involvement of Richard Nixon or his campaign and then Nixon fumed periodically about a “Saturday Night Massacre” to stop the “witch hunt” but never carried it out. Thus, it shouldn’t be a surprise that the Trump-Russia probe ended differently than Watergate.

This time, Democrats aren’t going to wait for a measured report full of ambiguities. They are going to run with a compilation of accusations the whistleblower didn’t witness firsthand and their own interpretation of Trump’s telephone call with Ukrainian president Volodymyr Zelensky—with a burden of proof that must satisfy only the judgment of a majority of their own chamber.

Nevertheless, the Trump-Zelensky call wasn’t “perfectly fine.” While the Democrats are arguably being tendentious in their descriptions of the conversation, it doesn’t lend itself well to a full-throated defense either. The impeachment question that has so far polled the best, asked by the firm YouGov, is: “If President Donald Trump suspended military aid to Ukraine in order to incentivize the country’s officials to investigate his political rival, Joe Biden, and his son, would you support or oppose impeachment?”

“Suspended the military aid” goes beyond what we currently know and one can quibble with whether that tells the whole story about investigating the Bidens. But it’s the argument Democrats are going to make and Trump has not done himself any favors here. This latest accusation of accepting foreign dirt to help him win an election made it impossible for House Speaker Nancy Pelosi to keep impeachment at bay.

Any defense of Trump must hinge on the idea that he thought he was pursuing a legitimate public interest in pursuing information about Crowdstrike and the Bidens in addition to the obvious political self-interest. And what is an ostensible CIA employee doing leaking presidential communications anyway? Is this the fulfillment of Senate Democratic Leader Chuck Schumer’s threat to Trump that “you take on the intelligence community, they have six ways from Sunday at getting back at you”? So-called deep state figures have been cheerleaders against Trump in the past.

As long as the economy keeps humming along and unemployment remains low, Trump can try a version of the Bill Clinton defense: I’m trying to create jobs and the Democrats are wasting their time on impeachment, overturning the last election and short-circuiting the next one. But Trump is far less disciplined than the forty-second president and likely to evince tendencies that contribute to his unpopularity while defending himself against the charges.

The inquiry comes at an inauspicious time for Biden as well, with Elizabeth Warren creeping ahead of the former vice president in some polls and at a minimum beginning to consolidate progressive support behind her. Perhaps Biden will bounce back as impeachment hearings cast him as the hero unfairly maligned by Trump. It’s also possible that after losing one election with a nominee whose shadiness prevented her from winning the corruption argument against Trump, Democrats will decide it’s not worth even risking a second time.

Impeachment, however, is a risk they are finally willing to take.