The Democrats Go To War Against William Barr 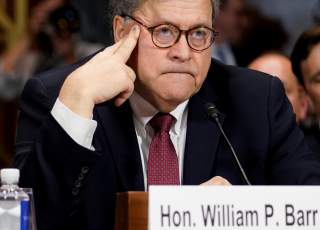 Yesterday the House Judiciary Committee voted on a “resolution recommending that the House of Representatives find William P. Barr, Attorney General, U.S. Department of Justice, in contempt of Congress for refusal to comply with a subpoena duly issued by the Committee on the Judiciary.” This vote comes after Barr’s contentious appearance before the Senate Judiciary Committee last week, and his skipping of scheduled testimony for the House Judiciary the next day. The contempt charge is in response to Barr’s failure to hand over an unredacted version of the Mueller Report. The report, with redactions made to four categories of information, was released last month. The only attorney general in U.S. history to previously be found in contempt, Eric Holder, was for a similar reason: a failure to turn over documents relating to the U.S. Bureau of Alcohol, Tobacco, Firearms and Explosives (ATF) gunwalking scandal. Yesterday morning, in response to the expected vote, the Trump administration announced a protective assertion of executive privilege around the report.

“This is not a step we take lightly,” said Committee Chairman Jerrold Nadler (D-NY) in his opening remarks. “It is the culmination of nearly three months of requests, discussions, and negotiations with the Department of Justice for the complete, unredacted report by Special Counsel Mueller into Russian interference in the 2016 election, along with underlying evidence.” According to Nadler, “[t]his is information we are legally entitled to receive, and we are constitutionally obligated to review.” Making it clear that the issue was not just the report itself but congressional oversight at large, Nadler said “If Congress is not entitled to the full, unredacted Mueller report, one wonders what document we would be entitled to.” Finally, responding to Senate Majority Leader Mitch McConnell’s (R-KY) Tuesday speech, Nadler added “And to those who consider the matter ‘case closed,’ in the words of some of our leaders, and we’re just to simply move on, I would say that to do so is to announce, loud and clear, that such a course of action has the effect of aiding and abetting in the administration’s campaign of total, blanket, and unprecedented obstruction.”

Ranking Member Doug Collins (R-GA) believed the whole hearing was a waste of the legislature’s time. Collins mentioned the Justice Department’s rejected offer to let Nadler and five other Democratic leaders read a less redacted version of the Mueller Report, including a 99.9 percent unredacted volume on obstruction of justice. Furthermore, in Collins’ words, Barr was forced to forego last week’s scheduled hearing due to “Democratic gamesmanship.” Collins pointed out that it’s been less than twenty days since Nadler issued the subpoena for documents, while Republicans in 2012 did not begin the process of holding Attorney General Eric Holder in contempt until the subpoena had been ignored for more than 250 days.

Democratic members of the committee took the opportunity to raise their voice against the administration’s actions. Rep. Ted Lieu (D-CA) emphasized that this is a serious legal matter: “The congressional subpoena is the law. How do we know that? That’s what the court upheld during Watergate.” Meanwhile, Rep. Hank Johnson (D-GA) focused on politics. “How can we impeach without getting this document?” he asked. And 2020 presidential candidate Eric Swalwell (D-CA) repeated an analogy he’s used before. Describing the hacking of the Democratic National Committee’s emails as an “attack on America,” Swalwell criticized President Donald Trump’s recent phone call with Vladimir Putin by saying, “When we were attacked by Japan, Franklin Roosevelt did not call the Emperor of Japan. When we were attacked by Al Qaeda on September 11, George Bush did not call Osama Bin Laden.” The attacks on Pearl Harbor and on 9/11 killed 2,403 and 2,996 Americans, respectively. There are currently no casualties connected to the leak of the DNC emails.

Republicans were uniform in their disappointment in the committee’s conduct. “Last week when the Attorney General refused to show up for this committee’s kangaroo court, the majority set up an empty chair, ate chicken and pretty much made a mockery of this committee. A committee that was once led by the likes of Daniel Webster,” eulogized Congressman Steve Chabot (R-OH). “I’m really here in mourning for a once great Judiciary Committee,” agreed Rep. Louie Gohmert (R-TX). James Sensenbrenner (R-WI), former chair of the committee, said its members couldn’t be trusted with the kind of information that had been redacted. “Now, all of us know that it’s really impossible for the people who work on this Capitol Hill to keep a secret. If there is a…completely unredacted version including the grand jury testimony…it will be on the front page of every newspaper in the country within 48 hours and talked about incessantly on the cable news shows whether you watch FOX News or MSNBC,” warned Sensenbrenner. Matt Gaetz (R-FL), congressional darling of the Trump inner circle, used his time to praise the administration’s record in office, exclaiming that “the Trump economy is hot!”

Over the course of the hearing, Democrats lasered in on the fact that the publicly released Mueller Report was only 92 percent unredacted. “I wish when I was a child, I could get a way with telling 92% of the story to my mother. I would always tell the same good 92%. And I would lave all the bad deeds, lies, and crimes in the 8%,” said Rep. Cedric Richmond (D-LA). Other members attempted to compete in their analogies. Rep. Jamie Raskin (D-MD) said “[y]ou could redact 8% of the Constitution of the United States and get rid of freedom of speech, freedom of press, religious freedom, equal protection and due process … And it may sound like it’s not a lot when they keep saying that it’s only 8% of a report. But wouldn’t all of us like to hide 8% of our lives?” asked Rep. Sylvia Garcia (D-TX). “I’m Catholic. When I go to confession, do I just not tell 8% of the things that I really should confess about? No, you confess about the whole thing.”

Partway through the committee, Rep. Gaetz proposed an amendment to the resolution stating explicitly that no part of the resolution could be misconstrued as instructing the Attorney General to break the law. Chairman Nadler agreed to the amendment, with Gaetz responding with a large smile and a thumbs up. The amendment was adopted by a voice vote.

Gaetz proposed the amendment because numerous Republican congressmen had made the point that it’s illegal for the attorney general to release grand jury information on his own authority. What followed was an extended discussion over what the committee had actually been debating for nearly four hours. Nadler said no one was instructing Barr to break the law; he described the issuing of the subpoena “as the beginning of a dialogue process.” Rep. Ken Buck (R-CO) disagreed, saying “I’ve issued many subpoenas on behalf of prosecutor’s offices I’ve worked in. I’ve never considered it the beginning of a dialogue. I’ve considered it a command by the court to produce documents.”

“It [finding Barr in contempt] was the logical next step…to the Attorney General’s refusal to respond to the subpoena,” said Fred Wertheimer, President of Democracy 21 and longtime advocate for government accountability. “But it is also part of what is going to unfold in response to President Trump’s unprecedented attack on the constitutionally derived role of Congress to exercise oversight over the executive branch. When the president says that his administration is not going to respond to any subpoenas, he is conducting a frontal attack on our system of checks and balances. That cannot be allowed to stand.” Wertheimer does not believe the arguments over language are what’s at stake, telling TNI that “[t]he House Democrats wrote the subpoena, and I think are in a stronger position to interpret their own subpoena than the Republicans.”

The final resolution to find Attorney General William Barr in contempt passed twenty-four to sixteen. It will now move on to the House of Representatives where it is likely to be passed by the Democratic majority. The last time an official in a presidential administration was prosecuted for being in contempt was 1983.

Hunter DeRensis is a report at the National Interest.