The Democrats' Phony War Against Trump 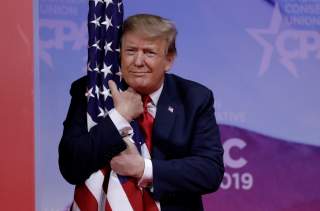 In the late 1990s, an acquaintance of mine decided to bicycle, west-to-east, across America. And he did. He biked all day, every day, and at night he’d roll out his blanket off the road somewhere and sleep. He biked along rural roads, over mountains and through forests, feeling his way forward. He started in California and ended his trek on a sunny day in Washington, D.C.—pedaling along the C&O Canal as his friends and family applauded. Speaking to him a week later, I asked him what were the three most important things he learned about the country.

He thought for a minute before answering: “The first is that most Americans live in mobile homes,” he said. “They’re everywhere. The second is that most of the country’s junkyards are in eastern Colorado. Big piles of rusting cars. And the third is that the most hated person in America is Hillary Clinton.”

I was surprised by the answer: I had thought that most of America’s junkyards were in Georgia. “Oh no, no way,” he told me. “Colorado. Definitely Colorado.”

What wasn’t surprising was his conclusion about Hillary Clinton. Clinton was loathed. She’d always seemed a bit too much of an elitist. “I’m not sitting here – some little woman standing by my man like Tammy Wynette,” she’d told 60 Minutes while defending her husband. She had brought down the wrath of conservative America by suggesting the scandal about Bill’s philandering was the result of a “vast right-wing conspiracy.” But it wasn’t just conservative America that didn’t like Hillary: her favorability ratings were always subject to wild swings, peaking when she served as a New York Senator, then plunging again when she announced for the presidency in April of 2015, when they stood at just 41 percent. Not just not good, but bad. Really bad.

That, in 2016, the Democratic Party could actually nominate someone with such low polling numbers came as a shocker. It should not have been. The Democratic Party has been a participant in self-immolation for well over two hundred years. Back in 1860, the Democrats set themselves alight by settling on Stephen Douglas, a world-class trimmer and slavery apologist, as their standard bearer. His nomination handed the election to a railroad lawyer from Illinois. The Democrats poured gasoline over themselves yet again, in 1968, nominating the soft-as-a-pillow Hubert Humphrey, whose defense of Vietnam gave the White House to Nixon. The same proved true in 2016, when polls showed that a sizeable number of Americans who voted for Trump didn’t actually like him—they simply disliked Hillary more.

You would think that, by now, the Democrats would have learned a thing or two about electoral politics. They haven’t. When Clinton lost to Trump back in 2016, the party’s leaders and supporters had a choice: they could have concluded they had taken a wrong turn, nominated a historically awful candidate and needed to reconnect with the American people—or they could blame Russia. They chose Russia. The result has been as catastrophic for the Democratic Party and the American people as the election itself, for they have accomplished the impossible: They have turned Trump into a victim of a “deep state,” given him a better-than-even shot at a second term, and empowered his scandal-plagued cabinet to greater excesses. Well done.

There was always a bit of an odor about Russiagate, starting with the Steele Dossier. The dossier, written by former British Secret Intelligence Service (MI6) officer Christopher Steele, contained unsupported allegations that the Russian government had been “cultivating, supporting and assisting”  Trump for years, and had gained compromising information on him (including salacious reports of sexual acts), in order to undermine the Western alliance. For me, the difficulty with the report consisted not in what it said, but in who wrote it. Steele (as a colleague described him), is “honest, serious, hardworking, detail oriented and completely believable”—that is to say, he’s unlike any MI6 officer whom I’ve ever met.

While pundits and cranks alike ooh and ahh over the insights of foreign and domestic intelligence services, I’ve never found them to be that impressive. MI6’s experts on Iraq in the run-up to the 2003 invasion of that country, to give just one example, were expats living in London (I met some of them), who hadn’t been home in years, while the Central Intelligence Agency (CIA) has been so breathtakingly wrong so often that many reporters simply dismiss what it says. CIA officers worried about their safety traveled in armored caravans through the West Bank and Gaza during the Second Intifada, and they knew absolutely nothing about what was happening on the ground. Nothing. At one point, when I asked them to brief me on a particular incident, they demurred: perhaps I could brief them, they said. Weapons of Mass Destruction in Iraq? That’s the least of it: in 1987 the CIA reported that East Germany’s GDP matched that of West Germany—a report so head-spinningly crazy that then-Senator Daniel Patrick Moynihan issued one of his most legendary, and droll, statements saying: “Any taxi driver in Berlin could have told you that was not so.”

Of course, the Steele Dossier is not the reason that Robert Mueller was appointed to look into “any links and/or coordination between the Russian government and individuals associated with the campaign of President Donald Trump,” but it provided the justification for later allegations. Soon enough, former CIA and Federal Bureau of Investigation (FBI) officials (John Brennan, James Clapper, James Comey, Michael Hayden, and others), lined up on cable news outlets to lend their expertise to the burgeoning scandal. There they joined a growing network of like-minded colleagues who termed themselves as “experts” who’d, once-upon-a-time, served as the government’s WMD choir on Iraq: Max Boot, Bill Kristol, David Frum, Jennifer Rubin. They were a veritable dog’s breakfast of “ideologically-driven security state officials, neoconservative elites, liberal interventionists and power-flattering media personalities,” as Michael Tracey has elegantly, and accurately, described it.

Which simply suggests what many reporters and foreign policy analysts who refused to participate in the Russiagate frenzy kept saying: why in the world would anyone believe that the same officials, elites, interventionists and personalities (not the deep state, mind you, but the galactically incompetent one), who got Mohammad Mosaddegh, the Vietnam War, Augusto Pinochet, the collapse of the Soviet Union and Iraqi WMD wrong, somehow get Donald Trump right?

Then too, there were any number of tip-offs—signs that not all was right in the world of Washington’s anti-Trump elites. One of the first was Trump’s appointment of Gina Haspel to head the CIA. Haspel, who oversaw secret CIA detention sites where suspected terrorists were tortured, should have provided buckets of anti-Trump fodder for cable talk shows (this would have been easy: her nomination was condemned by Senator John McCain), but calling out Haspel would have meant contradicting any number of on-air personalities. Among these was James Clapper (who once explained to us that the reason that we didn’t find WMD in Iraq is because it had been shipped to Syria) and John Brennan (the one-time overseer and defender of U.S. drone kill lists), who supported Haspel nomination and signed a letter saying so. Getting Haspel in, it seems, was more important to them than getting Trump out. Or, to put it more bluntly, it turns out that Clapper, Brennan, Comey, Hayden were not so much anti-Trump as flacks for the CIA and FBI.

Then too, the outrage evinced by Trump’s decision to withdraw U.S. troops from Syria was met with such condemnation that you’d have thought he was actually trying to get us into a war—instead of out of one.

The dust-up over Syria was whole cloth, and historically thin. Trump’s critics claimed the decision took the State Department by surprise (it didn’t), that it was unplanned and uncoordinated (not true) and that large segments of the military opposed it: also not true, but even if it was, so what? The commentariats take on the decision was uniformly shoddy, amateurish and predictable: Trump, it was claimed, was turning Syria over to the Russians (who’d deployed to the country when Obama was president), or to the Iranians (who’d supported the Assads since the late 1960s), and betrayed the Kurds—as we’d once betrayed the Vietnamese, as Max Boot noted, because, apparently, 58,220 American lives just aren’t enough.

In the wake of the Syria withdrawal decision, the anti-Trumpers decried the departure of James Mattis, because he was the last of the “adults in the room.” Among its members, as this narrative would have it, was H.R. McMaster and John Kelly, a warrior caste that spent much of their military careers spinning narratives of doom: warning America against the evil forces of Iran (Mattis), Russia (McMaster) and the desperados along our southern border (Kelly). We should have known better: taking an officer out of uniform and putting him into a three-piece suit doesn’t change his worldview.

Perhaps, after all, it’s time for “a little straight talk among friends,” as President Gerald Ford once said. Here’s what it amounts to: what got Donald Trump elected in the first place—the slow but certain erosion of trust in American institutions and their discredited leaders—not only remains in place, it is reinforced every night on America’s most watched cable programs. It’s galling: a man whose statements and beliefs would have him shunned in any society, but who campaigned as the anti-establishment candidate, is now celebrated as the anti-establishment president. If Trump’s opposition isn’t careful, what happened in 1860, 1968 and 2016 will happen yet again. The Democrats will offer up Hillary Part Two. They won’t nominate a progressive; they’ll nominate a Democrat. By God, if it wasn’t obvious before, it ought to be obvious now: there’s a difference.