Democrats Tried to Give Billions to Iran, Russia and Communist China 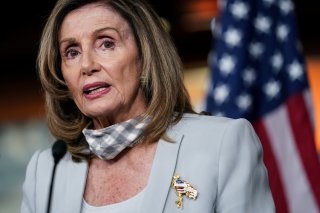 The House of Representatives passed a major appropriations bill, 229 to182, on July 31, 2020. Among other things, the bill contained funding for the next fiscal year for all eleven departments of the U.S. government. For most news outlets, that was not particularly surprising since Congress must pass a budget for the government every year. Except that this time there was something unusual.

The House Rules Committee, just before the legislation reached the House floor, inserted a new section in the bill. According to Rep. Bill Huizenga (R-Mich.) with little debate, a whopping $3 trillion was tacked onto existing International Monetary Fund (IMF) drawing rights or funding, and by a party-line vote.

The new section directed the IMF to send the $3 trillion dollars—with no strings attached—as coronavirus relief aid to all nations based in part on their respective GDP and financial losses.

That was not done by mistake. Adding such a huge expenditure to any bill must have had the prior agreement of Speaker of the House Nancy Pelosi (D-Calif.) or the idea would have gone nowhere.

Nearly $300 billion was tucked in the bill for Iran, Venezuela, Syria, China and Russia, a rogue gallery of countries masquerading as normal nations but behaving more like criminal gangs.

For example, the U.S. State Department has officially stated that Iran commits more terror attacks than any other country on earth. If there are any doubts about Iran’s intentions regarding the United States, read the exultant headline of Iran's state-controlled Afkar News, “American Soil Is Now Within the Range of Iranian Bombs.” They were celebrating the fact that Iran now has the technology to get them within reach of deploying intercontinental missiles capable of reaching the continental United States.

China gave us the coronavirus and, as a consequence, more than half a million people have been killed and trillions of dollars of economic damage has been done worldwide.

Russia continues to send little green men to subvert Ukraine, Belarus, Georgia, and Moldova while building up the largest arsenal of nuclear weapons in the world.

As for Syria, thousands of its people have been killed in a brutish civil war, and providing the Assad regime vast sums of money is the same as furnishing it with even more horrible war machines than the chemical weapons it has already used against its own people.

Venezuela continues its downward spiral into economic chaos while working with Cuba and Iran to subvert the United States and its allies in the hemisphere.

The specific funding for these countries, according to Rep. Huizenga, is staggering: $20 billion for Iran, $75 billion for Russia, $170 billion for Communist China and $17 billion for Syria.

Democrat supporters of the bill may wish us to believe that such a huge gift of taxpayer’s money to the IMF is America’s way of helping the world to overcome economic damage from the pandemic. However, there was no mention of other nations contributing to the IMF or of the impact that giving $3 trillion to other nations—including America’s enemies—would have on its national debt.

And there are other downsides.

First, there are no “strings” attached to the funds. And even if there were, how would such restrictions be enforced? What is to prevent the recipients from buying weapons with their American money?

Second, Russia and China recently threatened at the United Nations to veto a U.S. resolution to extend the arms embargo on Iran. And there is every indication that Russia and China are anxious their arms industries to crank out weapons for Iran to buy, including more missiles or missile technology capable of carrying nuclear weapons. With no arms embargo, what’s the chance that Iran might use $20 billion in easy money from the IMF to purchase such weapons or the advanced technology needed to finally deploy missiles capable of reaching New York or Washington, DC?

Huizenga produced a Facebook video that admonished the procedure used to pass the House bill, explaining in it that the bill’s IMF provision had no committee hearing and that opponents like him were allocated only one minute to speak in opposition. A minute is insufficient time for informed debate on spending $3 trillion let alone giving $300 billion to rogue states.

Even worse, a floor amendment the Michigan lawmaker tried to offer would have prohibited U.S. banks from using money in U.S. accounts for an IMF bailout of Iran. The Speaker of the House ruled that it was not in order.

Will this bill become law? The Senate companion bill has not yet been scheduled for committee or floor action, and according to Senate Appropriation Committee sources the funding for Iran, China and other villainous nations won’t fly. Those same Senate sources say the Treasury Department has also weighed in and emphatically told Senate appropriators, “No way.”

Nevertheless, in the strange world of international institutions the member nations of the “world community,” irrespective of their behavior, all get freebies from the IMF. One-quarter of those funds come from U.S. banks and American account holders. And while IMF regulations may stipulate the funds are “loans,” history shows that those loans will be rolled over into bigger loans down the road and then eventually be forgiven.

Thankfully, Huizenga has drawn attention to this astounding House bill, even if it seems to have no chance of passing in the Senate since the majority, and at least some of the minority, won’t approve it.

But be warned. The makeup of Congress and the administration itself may change in the coming elections. And terrible ideas like an IMF bailout of America’s enemies might be resurrected.

Peter Huessy is president of GeoStrategic Analysis. He is also the director of the Nuclear Deterrence Center at The Mitchell Institute.