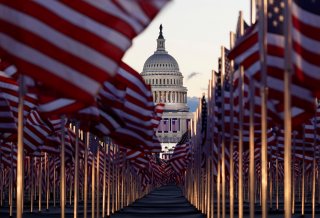 The FBI thwarted a plot by an extremist militia group to kidnap Michigan governor Gretchen Whitmer and execute her for “treason” on Oct. 8, 2020. That radical cell had big plans, which included storming the legislature armed with improvised explosive devices codenamed “cupcakes.” In concert with local law enforcement, the FBI tracked individuals from multiple states who pledged online and at rallies to overthrow the state government. In this instance, the FBI followed leads, conducted investigations, and prevented domestic militia terrorists from achieving their lethal aspirations.

Conversely, little of this sleuthing appears to have taken place prior to Jan. 6, 2021, allowing thousands of “true believers” and violent extremists to attack and occupy the U.S. Capitol. Why didn’t law enforcement carefully connect the dots prior to the worst threat to the safety and security of the U.S. Capitol since it was sacked by the British in 1814?

Almost twenty years ago, the 9/11 Commission Report described the “stove-piping” of information by various agencies within the intelligence community. They found that many of those three-letter agencies were unwilling or unable to communicate with each other about evidence pointing to an imminent threat. Intelligence warning signals, buried in highly classified files and databases prior to the terrorist attacks, were missed or ignored. At that time, the intelligence community did not connect the dots or connect with each other, according to the report.

Intelligence reform, to include the standing-up of a massive Department of Homeland Security (DHS) apparatus, which includes its so-called “DHS Intelligence Enterprise,” sought to create a network of local, state, and federal intelligence organizations to address the causes of the “ignored signals” of 9/11. Ideally, this reform effort was supposed to foster a revolution in information-sharing. Bottlenecks and obstructions were to no longer create blind spots for federal investigators. Yet somehow, another series of threatening signals—this time entirely domestic—were once more missed or ignored. In the bowels of the DHS Intelligence Enterprise, there were those who saw danger from pro-Trump fanatics embedded in the protests and signaled warning. But those responsible for protecting the Capitol and its denizens from harm missed those alerts.

In presenting last year’s budget request, former DHS Secretary Kristjen Nielsen described the funding as “landmark investments to protect America and our way of life . . . by combating terrorism and homeland threats, defending our nation’s networks, and critical infrastructure.” One of DHS’s roles in protecting the country is to assist “fusion centers,” organizations set up after 9/11 at the state level, to “serve as focal points . . . for receipt, analysis, gathering and sharing of threat-related information” between state, local, tribal, federal, and private sector partners.” Fusion Centers are a key part of the DHS Intelligence Enterprise. In fact, the District of Columbia has a fusion center of its own. It’s known as the National Capital Region Threat Intelligence Consortium, which operates twenty-four hours a day, seven days a week, in partnership with Virginia, Maryland, and the federal government. Together, they conduct analysis, link homeland threat indicators, and disseminate warnings.

How is it that the DC-based fusion center and the larger DHS Intelligence Enterprise with which it is networked missed the mark? Did public statements from the Proud Boys, members of the “boogaloo” movement, and other fanatical elements calling for a storming the Capitol on Jan. 6 seem like empty noise? The indicators and warnings of what they had in mind were quite clear. And the intelligence enterprise should have connected the dots. The events of Jan. 6 could have been much worse: imagine if they had carried out a terrorist attack on the Capitol mirroring the 1995 Oklahoma City bombing.

Perhaps even more shocking was the fact that the preponderance of the data pouring out of chat rooms, online forums, rallies, and meetings was open-source. This was not the intelligence collection challenges of the immediate post–9/11 world where members of the National Security Agency and Central Intelligence Agency worked tirelessly to pinpoint and translate terrorist “chatter” and penetrate their secret networks to cripple deadly plots. The siege of the Capitol was planned in open sight, yet the intelligence enterprise tasked to ensure the security of the Capitol and protect senior government leaders failed. This insurrection was knowable and preventable.

In February 2020, the Department of Homeland Security’s former assistant secretary for threat prevention and security policy, Elizabeth Neumann, told the House Committee on Homeland Security that “it feels like we are at the doorstep of another 9/11 . . . we can see it building and we don’t quite know how to stop it.” She was discussing the tracking and monitoring of burgeoning “domestic terror” cells across the United States like the one in Michigan. How right she was.

And yet, in spite of the huge DHS security apparatus built in the wake of 9/11, with a fiscal year 2020 budget of over $51 billion dollars, there was a riot inside the U.S. Capitol on Jan. 6. To be sure, according to Jan. 12 reports, the FBI’s office in Norfolk, Virginia, produced an assessment that it shared with headquarters, which warned of a violent attack on the U.S. Capitol. It cited as evidence online incitement such as “Go there ready for war,” and “Be ready to fight. Congress needs to hear glass breaking, doors being kicked in, and blood from their BLM . . . slave soldiers being spilled.” And still, the Capital was stormed and occupied.

How is it that $51 billion in tax dollars didn’t enable the DHS Intelligence Enterprise to see the forthcoming attack on the U.S. Capitol and prevent it from happening?

Frances Tilney Burke is a PhD candidate focused on security studies and intelligence at the Fletcher School, Tufts University, where Richard H. Shultz, Jr. is the Lee H. Dirks Professor and Director of the International Security Studies Program.