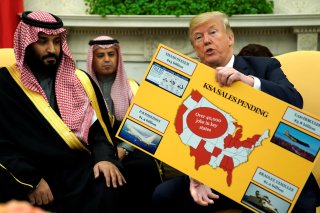 THIS YEAR, the partnership between the United States and the oil-rich Arab monarchies of the Gulf celebrates its seventy-fifth anniversary. Launched in a secret meeting between American president Franklin D. Roosevelt and Saudi king Abdulaziz Ibn Saud aboard the USS Quincy on February 14, 1945, this relationship is one of the oldest in the world. In an ever-changing international system where friends often turn into foes and vice versa, this is a remarkable achievement. Even full-fledged military alliances, which typically include collective defense commitments where all members pledge to each other’s defense against external threats, have an average age of fifteen years.

The partnership has endured because it is based on political-strategic understandings (even if some are secret and/or informal), shared security interests, and strong economic ties. It is supported by a large and lasting U.S. military presence on Gulf territory meant to offer protection, and by the regular transfer by Washington of modern and lethal arms to Gulf governments, the size of which is unmatched among any other set of allies and partners in the world. It has survived several crises in its lifetime, the most critical of which is 9/11.

Yet for all its resilience, the U.S.-Gulf partnership has underperformed since the second term of the George W. Bush presidency in the critical area of security coordination. During three major crises, each happening under a different U.S. administration, the partnership failed to effectively address the security concerns of the Gulf states. While no partnership is perfect, such major and persistent breakdowns in coordination among longstanding security partners are uncommon, and can be deadly if left unresolved.

U.S. domestic politics, shifting American strategic priorities, policy divergences, the nonexistence of a formal U.S. security commitment, and operational considerations all played a role. But on their own, they cannot fully explain why security problems in the partnership have persisted for over a decade. There is another important but overlooked factor: the lack of institutionalization of the partnership, characterized by the absence of norms, mechanisms, and procedures for consultation between Washington and Gulf capitals on vital matters of national security. This normative and bureaucratic deficit is old, and it has contributed to the fraying of the U.S.-Gulf partnership.

IN 2002, President George W. Bush was consumed with preparations for war against Iraq. When he learned during that summer that Iran had been building a clandestine nuclear program, he didn’t have the bandwidth to go after Tehran and instead had to settle for economic sanctions against its regime.

Even though Bush remained opposed to an attack against Iran throughout his time in office, he became more open to the idea in his second term, in part due to pressure by Israel and senior members of his own cabinet, led by anti-Iran hawks Vice President Dick Cheney and Under Secretary of State for Arms Control and International Security Affairs John Bolton. In his memoirs, Bush admits that he, “directed the Pentagon to study what would be necessary for a strike.” “This would be,” he added, “to stop the bomb clock, at least temporarily.” Yet at no point during that tense period did the Bush administration consult with Gulf partners and jointly prepare for war and the day after.

Most diplomatically active among the Gulf states at the time were the Emiratis, who were shuttling nonstop between Washington, London, and Brussels, desperately trying to obtain information that could help them interpret Washington’s intentions vis-à-vis Iran. All of the Gulf states, especially the smaller ones that lack strategic depth, are vulnerable to missile attacks by Iran—the Islamic Revolutionary Guard Corps’ suspected assault on Saudi Arabia’s oil facilities on September 14, 2019 is the latest proof of that. As such, any extensive military exchange between the United States and Iran in the region would constitute an existential threat to them should Iran attack them in retaliation, like Saddam Hussein did against Israel and Saudi Arabia during the 1990–91 Gulf War.

Yet despite repeated attempts by Gulf leaders to seek greater transparency from and work together with the Bush administration, U.S. officials kept their Iran cards very close to their chest, which resulted in a crisis of trust in the partnership and fears in the Gulf of a war for which they were ill-prepared.

Those concerns continued during the Obama presidency. Not only did Israel threaten to act alone against Iran, but also its decisionmakers, led by Likud party chief and Prime Minister Benjamin Netanyahu, lobbied Washington hard to bomb Iran. Nevertheless, determined to pursue an entirely different approach toward Tehran that favored negotiations and a broader rapprochement with its leadership, Obama resisted all Israeli pressure tactics and rebuffed their demands for U.S. military action. Obama’s diplomatic initiative, coordinated with European allies, culminated in 2015 in the Joint Comprehensive Plan of Action (JCPOA)—his signature foreign policy achievement.

OBAMA CAME to office with a fundamentally different worldview from Bush, eager to reengage with the world and put an end to his predecessor’s preventive war doctrine and penchant for unilateralism. In the Middle East, Obama sought “a new beginning,” as he described it in his speech in Cairo on June 4, 2009—one based on “mutual interest and mutual respect.” His offer of historic reconciliation wasn’t limited to old Arab and Muslim friends; it extended to longtime adversaries, including Iran.

It was shortly after he was elected president in November 2008 that Obama decided to pursue a path of dialogue with the Iranians. He had a meeting with his most senior intelligence advisors in which they briefed him, among other things, about the status of Iran’s nuclear program, predicting that Tehran would obtain and test a nuclear device in the period between 2010 and 2015. A few days later, as author Bob Woodward recounts in his book Obama’s Wars, Obama confirmed to Admiral Mike Mullen, the chairman of the Joint Chiefs of Staff, his intention to engage with Iran.

Years of intense diplomatic talks between American and Iranian officials ultimately led to an agreement, endorsed by Russia, Germany, China, France, and the United Kingdom, to restrict Iran’s nuclear program and put in place robust monitoring mechanisms to make sure Tehran wouldn’t cheat and race to the bomb. The accord was considered a diplomatic success, having removed the specter of war. But it was limited: it contained Iran’s nuclear program, though it didn’t eliminate it. The JCPOA’s imposed restrictions were also set to expire a few years later, some as early as 2025, prompting critics to argue that the deal provided Iran with a patient pathway to possibly acquiring nuclear weapons.

For the Gulf states, the problem was not that the American and Iranian sides reached a deal. Rather, it was the fact that Washington had often secretly negotiated with Tehran likely without ever consulting with them. Washington periodically briefed Gulf officials about the status of the nuclear talks, but never coordinated with them or sought their input. That the Gulf states learned after the deal was signed that it didn’t even address their number-one concern—Iran’s expansionist and sectarian drive in the region—made things worse.

A deal of such colossal significance naturally had strategic implications for the security interests of the Gulf states and all other U.S. partners in the region. And yet, Obama decided to hold the talks with Iran in confidentiality and limit them strictly to the nuclear issue.

Obama tried to repair relations with the Gulf states by holding a summit in Camp David in May 2015 and attending another in Riyadh in April 2016. But the wounds were too deep and the trust was effectively broken. It didn’t help that Obama, throughout his presidency, berated the Gulf states for their zero-sum approach toward Iran and lack of societal reform—comments which Iran often exploited. The Gulf states were taken aback by Obama’s general aloofness. They also were flabbergasted by his tolerance of Iran’s aggression in the region and impatience for their complaints about Tehran’s behavior. Nevertheless, they believed they could manage all that. But what they couldn’t understand nor stomach was how their supposedly closest and oldest partner in the world could tilt toward their top adversary and negotiate away their future while keeping them in the dark.

IF BUSH’S consideration of bombing Iran in his second term and Obama’s nuclear deal with Tehran were problematic for the Gulf states, President Donald Trump’s targeted killing on January 4, 2020, of Qassem Soleimani—Tehran’s de facto viceroy in the region and perhaps the second most important Iranian official after Supreme Leader Ali Khamenei—was even more alarming.

To be sure, Gulf leaders will not miss or shed tears over Soleimani. No one had caused more angst and harm to Saudi Arabia, the UAE, and Bahrain—the trio of Gulf Cooperation Council states who largely see eye-to-eye on matters pertaining to Iran—than the powerful general. It is probably the Bahrainis who are most pleased to see him gone, given his role in coordinating a network of radical Bahraini militants on the island-nation and masterminding a wave of domestic terrorism against the government since 2011.