Deploying Beyond Their Means: The U.S. Navy and Marine Corps at a Tipping Point 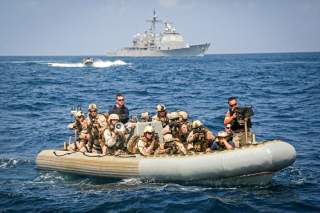 The U.S. Navy and Marine Corps are operating today under unsustainable levels of stress because of a fundamental mismatch between the demands placed on them and their supply of ready forces. Both services are striving to establish deployment cycles they can maintain over the long-term, but are unable to stick to them. Deployments continue to be longer or more frequent than planned; as a result morale is down among Sailors and Marines and the condition of their ships, aircraft, and equipment is suffering.

It isn’t surprising that demand is high for naval forces. The Islamic State is fighting U.S.-backed forces on multiple fronts; states throughout Africa and the Middle East such as Libya and Syria are failing or in crisis; rivals including China and Russia are rewriting international boundaries; and illicit trafficking persists throughout the littorals. The presence requested by Combatant Commanders and required by civilian officials to address these challenges exceeds what the naval services can deliver through their existing processes to prepare forces for deployment.

Over the last decade the Navy and Marine Corps met the demand by simply doing more with less. Between 1998 and 2015 the Navy shrank by 20 percent, from 333 to 271 ships. The number of ships deployed overseas, however, remained the same at about 100 ships. Each ship was, therefore, working about 20 percent harder to meet the demand. Deployment length statistics make this clear: in 1998 four percent of deployments lasted more than six months, while in 2015 all deployments lasted more than six months.

The Marine Corps is similarly making do. It is shrinking to 182,000 personnel by 2017, which will result in an operational force of about 108,000 Marines. If they maintain a 1 to 2 Deployment-to-Dwell (D2D) ratio, these Marines can just meet today’s requirements for overseas presence. This gives each Marine about 14 months at home for every 7 months away, which is acceptable but less than what Sailors and other service members generally get. And if any new demands arise, the Marines will need to accelerate deployments and adopt wartime rotation ratios.

Squeezing more deployed time out of each ship, Sailor, and Marine comes at a cost. The Navy’s own studies found Sailors are leaving the service due to long deployments, and satisfaction surveys reveal looming recruiting and retention problems if longer and more frequent deployments continue. The material condition of ships and aircraft are also degrading. The lack of carrier presence in the Middle East today resulted from the need for an extended maintenance period for the USS Dwight D. Eisenhower after being on virtually back-to-back deployments over the past three years. And the Navy faces a shortfall of three squadrons worth of F/A-18 Super Hornets because aircraft are reaching their flight hour limits faster than planned.

The Navy has four options to maintain today’s level of overseas presence without overworking the fleet:

- Grow the fleet through increased shipbuilding

- Forward base more ships to reduce their transit time to theater

First, more shipbuilding is the most enduring way to increase the ability of the fleet to provide forward presence. But even the Navy’s current shipbuilding plan will fall short of sustaining today’s level of presence given the deployment cycles, including the Optimized Fleet Response Plan (FRP), that the Navy wants to use. That shipbuilding plan requires about $5 billion more per year than the Navy has historically received. Shipbuilding plans that stay within historical fiscal constraints are even less able to sustain today’s overseas naval presence.

Second, the operational tempo (OPTEMPO) of each ship and unit could be increased, providing more deployed time per ship per year. This is the model used by our forward-based ships in places such as Japan, Bahrain, and Rota. This approach is about 30 percent more expensive, however, than operating and maintaining a ship on the normal FRP schedule. It would also reduce the service life of ships and associated aircraft, and could drive out personnel unless they receive additional compensation.

Third, the Navy and Marine Corps could continue to forward base more ships and units overseas, reducing their transit time and improving their responsiveness to crisis. The Navy increased its forward basing of ships by about 25 percent between 1998 and today. The Marines, for their part, began deploying to Darwin, Australia, in 2013 and stood up Special Purpose Marine Air-Ground Task Forces (SP-MAGTFs) in Europe last year for crisis response. These forces increase forward presence by both eliminating the transit time from CONUS and maintaining a higher OPTEMPO than their CONUS-based counterparts. As noted above this adds a 30 percent premium to the operations and maintenance costs for these ships and the Government Accountability Office earlier this year concluded the Navy was not providing these forward-based ships the funding or time to complete the maintenance they need.

Forward basing, however, may be a way to address high demands for two elements of Navy and Marine force structure that are hard to increase in the near-term, even with a larger shipbuilding plan: carriers and large amphibious ships. These ships are expensive and require a large industrial base to produce. They cannot quickly be constructed at a higher rate.  U.S. carriers and amphibious ships are particularly scarce in Europe. Today the Navy maintains a “hub” of naval forces based around a carrier strike group (CSG) and an amphibious ready group (ARG) in the Pacific and the Middle East. In Europe the Navy and Marine Corps maintain a set of small forces tailored to ballistic missile defense and crisis response. These may not be enough to deter Russian aggression in the north or respond to Islamic State violence in the south. The presence in Europe could be increased with a carrier and an ARG if an additional one of each were forward based in the Pacific. This would enable all Pacific demands for carriers and amphibious ships to be met by forward-based forces; carriers and ARGs based on the west coast of CONUS would support demands in the Middle East and those on the CONUS east coast would support those in Europe.

And fourth, the Navy could create new “menu options” for Combatant Commanders to choose from when they order up naval forces through the Global Force Management process. Today the Navy limits the menu to CSGs, ARGs, and a few other force packages. If a somewhat larger range of choices were available, commanders may be able to order a smaller package to get what they really need, rather than having to order the whole buffet because that’s what’s on the menu. This would have the effect of lowering the overall demand signal so it is more sustainable, and may have the side effect of being more effective at the task than a larger group that includes the needed capabilities and many others besides.

The Navy should be investigating all of these options to create a sustainable plan for maintaining its forward presence into the future. Either that, or presence demands must be reduced to prevent the fleet and force from unravelling. If we don’t, the fleet will begin to break down anyway, forcing a reduction in presence. Before that happens we should have a honest discussion about the value and purposes of naval presence and the best ways to deliver it.

Bryan Clark is a Senior Fellow at the Center for Strategic and Budgetary Assessment (CSBA).

Editor's note: This article is based on a new report from the CSBA that was released earlier today.