Desperate Argentinians Pin Their Hopes on a Capitalist Revolution 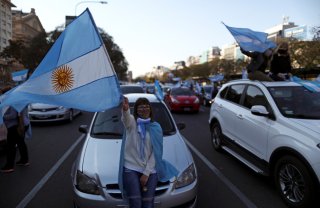 That’s why she became a libertarian. At seventeen, she joined the Students for Liberty. At nineteen, she founded her own libertarian group. The group grew quickly, attracting many members who opposed the government’s COVID-19 measures: “We had a seven-month curfew, you were only allowed out of the house for three hours on certain days to go shopping.” These measures led more and more members to their group.

They meet in apartments and restaurants and compare, for example, Marx’s Communist Manifesto with Hayek’s Road to Serfdom. It is a group for women who describe themselves as “liberal feminists,” in distinction to traditional feminists, who—according to Valentina—are mostly Marxists. Their hero is Javier Milei.

Adrina is twenty-seven years old. She fled Venezuela because she was sentenced to prison after joining the protests against the socialist regime. She studied law in Venezuela, he works as an IT programmer in Buenos Aires. She got involved in politics when her sister and brother-in-law were sent to prison after protesting against the socialist dictatorship. Her parents fled to Peru to escape the economic catastrophe. Adrina now lives in Buenos Aires and is involved with LOLA. I realize that just as it is considered cool for many young people in Western countries to be left-wing, it is cool here to be libertarian. Even in Tucumán, a provincial town in the north where there is little to see apart from crumbling houses and poverty, I give a lecture to seventy young people who attend courses at a libertarian think tank. They are against the establishment, against the over-reaching state, and live firmly in the hope that more capitalism will solve their problems.