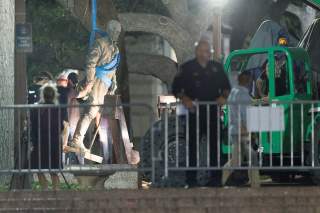 The perspective of the Sioux, Cheyenne and Arapaho is expressed in a quotation from Sitting Bull: “They attacked our villages and we killed them all. What would you do if your home was attacked? You would stand up like a brave man and defend it.”

But the final summation is offered on a plaque quoting the Lakota Indian Red Feather, who noted that “It was a terrible battle . . . a hard battle, because both sides were brave warriors.”

This strikes me as a formulation worth thinking about, and perhaps worth borrowing.

Dr. Cheryl Benard has a B.A. from the American University of Beirut, Lebanon and a PhD from the University of Vienna, Austria. After 9/11, when there was a need for experts on radical Islam, she joined the RAND Corporation as a senior analyst in its National Security Research Division and served as program director of its Alternative Strategies Initiative. Currently, she is president of ARCH, the Alliance for the Restoration of Cultural Heritage, www.archinternational.org, a nonprofit that helps local citizens in areas of conflict and postconflict protect or restore their cherished cultural heritage sites. She is the author of many fiction and nonfiction books, one of which was found on Bin Laden’s bookshelf during the raid on his compound.