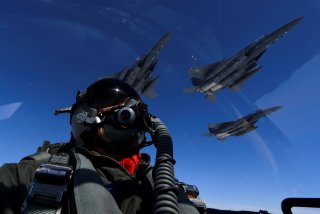 The Chinese Communist Party (CCP) seeks to supplant the United States as the global preeminent power. In doing so, the communist regime would use various forms of coercion to force other nations to conform to its likeness rather than respect the national borders of other nations in the region and in many cases their forms of democratic expression. If the CCP successfully transforms the Indo-Pacific into a Beijing-centric and Beijing-controlled region, then it will establish that the United States is no longer able or willing to defend its primary interests or make good on its security commitments to allies. This poses an unacceptable risk to U.S. critical allies in the region and threatens American sovereignty and our ability to engage freely and safely with sovereign democratic nations in a massively important region of the world.

Undergirding China’s increasingly bold malfeasance, which has become more prominent during the coronavirus pandemic, is its military strength. The priority for the U.S. military is to deter Chinese aggression in the Indo-Pacific region and to have the right weapon systems and strategies in place to win the war if deterrence fails.

The U.S. military seeks to prevent a military confrontation by bolstering a credible deterrent. An effective deterrence strategy seeks to prevent China from acting aggressively by causing Beijing to calculate that an act of aggression against the United States and our core interests would not be worth the cost. The United States can establish deterrence by punishment, which threatens offensive retaliation. And it can establish deterrence by denial, which requires creating as many dilemmas for the People’s Liberation Army (PLA) as possible so that they constantly conclude that they have an insufficient degree of certainty that whatever act of aggression they are considering would be ultimately successful.

Key to the U.S. efforts to deter Chinese aggression is the safety of Guam. Commander of U.S. Pacific Command, Admiral Davidson, testified before the Senate Armed Services Committee on February 12, 2020, and said, “Hawaii, Guam and our Pacific territories are part of our homeland and must be defended.”

Americans may need the occasional reminder about the importance of this U.S. island, but U.S. adversaries do not. In 2017, North Korea threatened to attack Guam. In response, then-Secretary of Defense Jim Mattis said the United State would “take out” any missile headed towards Guam and that it would then be “game on.” North Korea demurred, bolstering confidence in some military and policymakers that have a credible missile defense capability and demonstrating a will to employ it, can have a deterrent effect.

This tiny but mighty western Pacific island U.S. territory—part of our homeland—is six thousand miles from the coast of California, is indispensable to the United States. Guam has been a major strategic base for a variety of U.S. weapon systems and critical for maintaining the air-delivered leg of the nuclear triad in the Pacific region.

In April 2020, Air Force Global Strike Command announced it is transitioning to embrace a new concept, ending the continuous bomber presence in Guam. It will replace the mission to with a concept that will enable rapid, unpredictable deployments by forward-deploying bombers to various places in the Indo-Pacific region. The new concept is called Dynamic Force Employment (DFE).

“The United States has transitioned to an approach that enables strategic bombers to operate forward in the Indo-Pacific region from a broader array of overseas locations, when required, and with greater operational resilience, while these bombers are permanently based in the United States. U.S. strategic bombers will continue to operate in the Indo-Pacific, to include Guam, at the timing and tempo of our choosing.”

The strategic mission of the bombers, whose role in a crisis with a nuclear-armed state is to de-escalate, remains a commitment and priority for the United States. The DFE concept also increases the importance of Guam, as it will find itself as a kind of hub, an outpost of American territory, necessary for reinforcing and supporting the dynamic missions taking place so far from the United States mainland. Simply put, defense of Guam remains essential for the Pentagon’s shift to deterring China including efforts to boost the credibility of strategic deterrence.

Creating a more robust deterrent architecture for the Indo-Pacific region versus China, beyond the limited one versus North Korea, will require a mix of distributed offensive and defensive weapons—and a lot of them. The United States plans to deploy long-range precision fires from across all platforms, services, and domains, to hold at risk a variety of PLA target sets (remember, multiple dilemmas) from various distances, as well as deploy an integrated air and missile defense (IAMD).

The IAMD mission, as the Pentagon bolsters deterrence by denial, cannot be overstated. It is noteworthy that the missile defense architecture does not have to have the ability to intercept every single missile. Having a sufficiently robust active defense from the many diverse and increasingly sophisticated Chinese missiles will further complicate Beijing’s calculations, and any time the United States can do that, it will strengthen deterrence.

In the IAMD mission, integration warrants emphasis because its aim is to leverage sensors, command and control nodes, and interceptors across sea, land, air, and the space domains.

Cropsey goes on to explain that the U.S. military’s individual programs are stove-piped and “therefore developed independently of their technologically equivalent counterparts with little thought to organic integration.”

The Army has a solution for this, perfectly suited for a necessary for the Indo-Pacific theater. It’s called the Integrated Battle Command System (IBCS), and it, again, to quote Crospey, “strips away these additional layers of transmission and processing, fusing all the data from the systems in which it is installed into a single data picture.”

Wargaming exercises show how badly we need this capability when it comes to the architecture of air and missile defense systems. This is especially meaningful considering that critical to the IAMD mission is the establishment of a fixed and persistent 360-degree defense against the sophisticated Chinese air and missile threats, from the Second Island Chain—that is, Guam.

The Terminal High-Altitude Area Defense (THAAD) system has been deployed on Guam since 2013 and intercepts incoming missiles in their terminal phase of flight. Regionally, it also offers protection in South Korea. The other is a sea-based platform, an Aegis ship equipped with SM-3 IA interceptors. Aegis ships patrol the Pacific region and can be maneuvered to defend areas where war-planners anticipate a missile attack. Both of those systems were designed to intercept exactly the kind of rogue state missile threats rogue states possessed by North Korea.

But with the Trump Pentagon now focused on competing with and deterring major power, China, missile defense systems and strategies must adapt. The Aegis missile defense and THAAD systems should play a role in an architecture for the defense of Guam from threats beyond North Korea. But with a far more sophisticated threat than North Korea, that means deployment changes and upgrades and even greater need for our forward bases to ensure the health of strategic deterrence. The Aegis combat system is flexible, adaptable, and modular, and has great inherent ability to serve in this capacity. For THAAD, currently in planning and development are a larger booster for the THAAD interceptor and use of a two-color seeker allowing for the intercept of a wider range of advanced threats.  Additionally, integration of the PAC-3 MSE interceptor into the THAAD system, provides a second layer of defense and engagement opportunities at a lower altitude.

Japan had plans to deploy Aegis Ashore for its own homeland defense against the North Korean threat, and Tokyo’s cooperation with Washington on the SM-3IIA missile defense system has been an example of great alliance collaboration, especially in the face of Chinese opposition to its deployment. Causing some concern, Japan suddenly announced a pause in its Aegis Ashore deployment, citing cost and local population concerns. Those are matters for Japan to work out domestically, but it would be a mistake to eschew the initiative to build out a robust missile defense architecture, and so the faster they can resolve the issues, the better. As the threats from China grow, U.S.-Japan close cooperation on the missile defense mission will be foundational to preserving peace. And it is because of the China threat that this suspension in the Aegis Ashore deployment provides an optimal time for Japan to consider how to integrate and supercharge its missile defense architecture to handle not just the missile threats from North Korea, but explicitly from China’s growing and increasingly sophisticated arsenal as well.

As for the United States, another necessary venture for defense for the most sophisticated threats is the Space Develop Agency’s Hypersonic and Ballistic Tracking Sensor (HBTSS). Current land and sea-based interceptor systems even when integrated are inadequate for detecting and tracking certain types of sophisticated Chinese missile threats. We need HBTSS, a proliferated constellation of space sensors in low earth orbit meant to detect and track the hypersonic threats. There is precious little money for HBTSS in the Pentagon’s request to Congress. Until the country has it, we remain unable to detect and track Chinese hypersonic threats throughout the course of their flight, an unacceptable risk.