Deterrence Delayed: Time to Get Tough on China 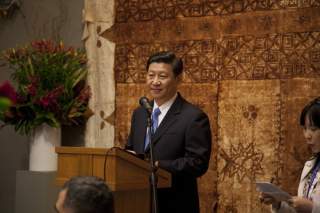 Deferred deterrence is a lot like deferred maintenance—when we finally get around to doing what needs to be done, the cost is almost always higher than it would have been with timelier action.

That is happening now with U.S.-China relations, which under the best of circumstances require constant vigilance. The first issue is China's stunningly lawless claim of sovereignty over virtually the entire South China Sea. When the claim was limited to the rhetorical and diplomatic realm, Washington responded in an appropriately measured manner. It noted the invalidity of Chinese overreach under international law, the need for multilateral negotiations and peaceful mechanisms for dispute resolution, and the inviolability of rights of navigation and overflight.

But when Beijing ignored those diplomatic and legalistic appeals and proceeded to implement its territorial ambitions over a year ago by building artificial islands—creating not only facts on the ground but actual new ground—it became necessary to push back by peacefully but firmly exercising navigational and overflight rights.

This summer, the United States did send a reconnaissance flight over the area and wisely invited CNN to record the public and transparent challenge in accordance with international norms. But nothing was done to assert navigational freedom, which is the most relevant mode of trade access for countries in the region. That passivity unfortunately continues months later. If the U.S. Navy has made some secret passage through those waters, it would be an ineffective gesture; lack of transparency defeats the international law and public diplomacy purposes of the Freedom of Navigation (FON) program.

With each day that passes without U.S. ships steaming within twelve miles of China's man-made islands, and declaring the transits, the perception grows that Chinese claims are being grudgingly accepted by the international community—that is, by the United States, it's most important member. Beijing can only be satisfied with the current state of play. If and when the United States does make its FON challenge, it will carry more confrontational baggage than would have been the case had it occurred at or around the same time as the overflight.

(An alternative scenario would be a Beijing-Washington arrangement whereby China "allows" the United States to make its symbolic transit in exchange for some diplomatic or other concession in the relationship, such as a reduction in reconnaissance flights near China, a muting of criticism on human rights, or some deliverable for Xi Jinping's September visit to Washington. That would be an unacceptable accession to China's aggressive behavior—some will call it appeasement—that would reward bad behavior and portend even more dire consequences for overall U.S.-China relations.)

The other potentially explosive issue is the need for an effective response to the massive hacking of U.S. government personnel files that has been widely, but unofficially, attributed to China. In fact, David Sanger of the New York Times reports that “administration officials are under strict instructions to avoid naming China as the source of the attack."

Doing so would require a U.S. response that then "could lead to an escalation of the hacking conflict between the two countries . . . [and] the downsides of any meaningful, yet proportionate, retaliation [might] outweigh the benefits."

As the president's staff struggles to meet his request for "a creative set of responses," one senior official said "we need to be a bit more public about our responses, and one reason is deterrence."  James Clapper, the director of national intelligence, affirmed the urgency of the challenge, telling Congress the hacking problem would only get worse “until such time as we create both the substance and psychology of deterrence.”

At present, the deterrence dynamic in both the South China Sea and cyber warfare situations is actually working against the United States because of fears over how China would respond. The psychology is working in a perverse, but not historically unfamiliar, way.

The transgressing state, in this case China, by definition does not respect international norms. The aggrieved international community, represented here by the United States, is genetically programmed to emphasize peaceful, diplomatic solutions to challenges—and, at the same time, it fears that the offending party will react to sanctions or other retaliatory action by further lashing out.

This is often described in the West as "irrational" behavior, but it is actually quite rational as long as there is no real price to be paid. As Director Clapper said about China's hacking feat, “You have to kind of salute the Chinese for what they did." Unless Washington finally breaks the counter-deterrence cycle by taking decisive action in both the South China Sea and the hacking episode, there will be a lot more saluting of China for what it is getting away with.

Winston Churchill is reputed to have invoked the maxim: “Revenge is a dish best served cold.” That does not seem to work with retaliation for international transgressions; the earlier the assertion of global norms, the lower the likelihood the violations will be repeated. Western moderation and restraint are invariably seen by states with fundamentally different value systems—such as China's Communist regime—as evidence of indecisiveness and weakness. The world has seen this movie before, and it does not end well.

Given the magnitude of the massive cyber breach and China's earlier collusion with Edward Snowden, a dramatic and proportional U.S. response is required.  Hacking and divulging the proceedings at some important Communist Party meeting—the Beidaihe retreat would be a good candidate if it is not cancelled—would send an appropriately strong signal of U.S. seriousness.  To rally party unity, Xi Jinping might feel compelled to stifle the dissent sometimes allowed at such get-togethers, but then the internal differences will be manifested in other ways. All in all, Beijing will have learned a lesson about the domestic costs of its international behavior.

Joseph Bosco served as China country desk officer in the office of the Secretary of Defense, 2005-2006, and is a member of the US-China task force at the Center for the National Interest. His website is www.josephabosco.com.