Deterrence Has Kept Hezbollah and Israel At Bay for 10 Years 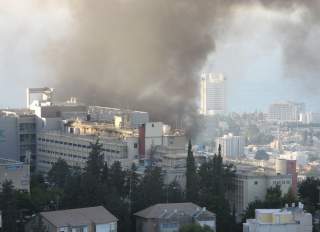 As Israel and the Hezbollah prepare to mark the tenth anniversary of the Second Lebanon War—touched off by a cross-border attack in which the Lebanese organization abducted two IDF soldiers, on July 12, 2006—two senior Israeli figures have recently communicated public messages of reassurance. The first was Israel’s newly appointed hawkish defense minister Avigdor Lieberman. In a tour of the Israeli-Lebanese border, on June 7, Lieberman noted, “We have no plans here other than to maintain the quiet” along the northern border. The following week, the head of IDF intelligence noted that Israel and Hezbollah were “not against another decade of quiet.”

Several developments account for the decade-long stability along the Israeli-Lebanese border. Among them are Hezbollah’s costly preoccupation in the Syrian arena, where it has become a key actor with thousands of boots on the ground; the party’s long recovery process from the 2006 war; Israel’s recurring military entanglements in the Gaza Strip; Iran’s desire to keep Hezbollah in reserve as a retaliatory force against a potential military attack on its nuclear program; and a general lack of appetite for another mutually destructive confrontation.

There is, however, another principal explanation, one that pertains to Israel’s and Hezbollah’s deliberate efforts to avoid war. Both parties have learned to adopt a strategy of deterrence that meets the theoretical prerequisites of deterrence as laid out in the literature. In fact, both have come to describe the conflict as being governed by mutual deterrence. Classic deterrence theory deterrence pertains to an actor’s deliberate efforts to dissuade an adversary from carrying out unwanted action. It achieves this by communicating credible threats to the effect that costs will outweigh gains. Indeed, earlier this year Hezbollah’s Secretary General Hassan Nasrallah described his organization’s strategy as a sustained effort to force Israel to “constantly balance costs and benefits,” which, he claimed, was why Israel has come to realize that “war with Lebanon would carry an extremely high price.”

In the years that followed the 2006 war, the Israeli military kept a steady flow of far-reaching threats against Lebanon, designed to communicate Israel’s capacity and resolve to abandon any restraints in any future war with Hezbollah, and achieve a decisive victory. The earliest articulation of Israel’s new deterrence posture was made in an October 2008 interview with Northern Command’s then chief Gadi Eizenkott, who declared that in the event of another war Israel would resort to “the Dahiyah doctrine”—reference to Israel’s heavy bombing of Hezbollah’s stronghold in the southern suburb of Beirut. Israel, Eizenkott added, would “apply disproportionate force and wreak damage and destruction upon any village from which fire is opened on Israel. As far as we are concerned, those would be military bases.” Israel would later reinforce the credibility of Eizenkott’s threat by publicizing highly detailed intelligence maps of Hezbollah’s military deployment in dozens of Lebanese villages.

Harsher rhetoric followed. In 2014, IDF chief of staff Benny Gantz warned that in any future conflict Israel would “take Lebanon and knock it and everything in it 70-80 years back, and then see what happens.” The following year an IDF brigadier general raised the bar to two hundred years, and earlier this year a senior IDF officer was cited as putting the number at three hundred years.

It was partly in response to such rhetoric that Hezbollah, with the help of Syria and Iran, has in recent years dramatically enhanced its military capabilities. Apart from a vast arsenal of short- and medium-range rockets, shore-to-sea missiles and antiaircraft systems, it has come to possess long-range precision-guided missiles capable of hitting specific targets anywhere in Israel. Nonetheless, one of Hezbollah’s overarching lessons from 2006 pertains not to the technical acquisition of weapons but to the manner in which military capabilities can be harnessed in the service of deterrence. Indeed, one of the main strategic lessons Hezbollah took away from the war holds that the mere possession of military capabilities does not automatically produce a deterrent outcome; weapons alone will neither deter an adversary from initiating war or prevent it from inadvertently miscalculating its way into war, nor guarantee that the adversary abide by any limitations once hostilities began. The idea that deterrence must be established and actively maintained is a recurring theme in Nasrallah’s postwar speeches, which have been replete with explicit references to deterrence.

For instance, in a speech marking the first anniversary of the cease-fire, Nasrallah explained that while “preparing for war is the best way to prevent war” and to establish “a balance of deterrence” with Israel, Hezbollah had to actively “make it understand” that it had the capacity to fight, persevere and win. On another occasion he remarked that Israel “must not be relaxed, not even for one second. It must know that if it indeed has any plans to attack, it should rethink those plans a thousand times.” Without this “you will not achieve a balance of deterrence—even if you possess weapons.”

To achieve a deterrent outcome, Hezbollah, in the words of a Lebanese journalist with close ties to the party, made a conscious strategic decision in the wake of the 2006 war to “break its complete silence surrounding its military capabilities and plans.” Hezbollah began to package its military capabilities into clear coercive threats, designed to convince Israel that Hezbollah possessed the capability to render Israel’s strategic capabilities tactical and its own tactical capabilities strategic. That is, even if Israel mounted a successful preemptive attack on Hezbollah, the party would still retain a capacity to inflict unacceptable pain on Israel.

Hezbollah’s military acquisitions would now be reflected in its deterrence communications and threats, which, contrary to Israel’s, have grown increasingly specific and precise. Whereas Israel’s deterrence posture accentuates the vast destruction Lebanon would suffer if war broke out, Hezbollah has been stressing its ability to hold at stake specific strategic targets in Israel. For instance, in 2009, in response to Eizenkott’s “Dahiyah doctrine,” Nasrallah introduced a new “equation” by which an Israeli bombing of Beirut or its southern suburb Hezbollah equaled the bombing of Tel Aviv. Further “equations” soon followed, as Hezbollah obtained more advanced military hardware. In 2010 Nasrallah warned Israel, “If you destroy a building in the Dahiyah we will destroy buildings in Tel Aviv.” He went on to warn Israel that if Israel targeted the international airport in Beirut Hezbollah would bomb Israel’s international airport. “If you bomb our ports—we will bomb your ports. If you attack our refineries, we will bomb your refineries. If you bomb our factories, we will bomb your factories. And if you bomb our power plants—we will bomb your power plants.” In May 2012 he warned that not only was Hezbollah capable of hitting Tel Aviv, “we are capable of hitting very specific targets in Tel Aviv.” Adding to that, Nasrallah said in September 2012 that his organization had established “a bank of targets consisting of many targets. Their coordinates are in the hands of the Resistance, they are within the range of our missiles, and our missiles are already directed at them. . . . What does this constitute? It constitutes capability, strength and real deterrence.”

That Hezbollah has indeed managed to influence Israel’s perception and cost-benefit calculus is reflected in Israel’s own assessments regarding the consequences of another all-out confrontation. In another war, the IDF estimates, Israel’s international airport and main seaports are likely to shut down from day one. The war, as former IDF chief of staff Gantz noted in 2013, could start off with a precision-guided missile hitting the IDF general headquarters in Tel Aviv: “if Hezbollah chooses to hit a specific target anywhere in Israel, it knows how to do it.” Unlike a decade ago, Israel is today all too aware of the inevitable costs of another war with Hezbollah, and of its own limitations. While this has brought a tense stability to the border, all parties need to keep in mind the common thread that runs through the conventional deterrence literature: deterrence works until it doesn’t.

Daniel Sobelman is a postdoctoral research fellow with the Harvard Kennedy School’s Belfer Center for Science and International Affairs and the Washington-based Israel Institute. This article is adapted from a forthcoming article in the journal International Security.

Image: an image from the conflict in 2006. Wikimedia Commons.