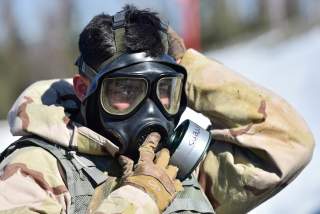 Images from the attack on Khan Sheikhoun on April 4 showed victims limp, with pinpoint eyes and frothing mouths, as emergency responders rushed to strip clothes from bodies and hose away chemical substances. For many, the U.S. strikes on a Syrian air base two days later were a satisfying response and long overdue in a protracted, deadly civil war that has left millions of families shattered, Daesh emboldened and Assad seemingly immune.

The following day, the World Health Organization issued a statement that symptoms, including the lack of visible external injuries, were consistent with exposure to nerve agents. Some of the victims sent to Turkey for treatment, who later died, reportedly tested positive for sarin. Taken together with conclusions by the Joint Investigative Mechanism (JIM) that Syrian forces deployed chlorine as a weapon on at least three occasions in the northern province of Idlib in 2014 and 2015, a number of capitals, including Washington, concluded that Assad was responsible for the attacks. The Trump administration claimed that it struck Shayrat Air Base, from which it said the attack on April 4 had been launched.

After the attacks on Khan Sheikhoun, the Organisation for the Prohibition of Chemical Weapons (OPCW) issued a statement that it had already begun collecting and analyzing data. Its investigations and conclusions provide vital independent, third-party evidence on violations of the Chemical Weapons Convention, for the international community to decide upon action. Accordingly, there is concern that the strikes ordered by Trump were too hasty—that time for the OPCW and the JIM is needed to investigate and confirm sarin use, and identify who is responsible, before military action is taken.

The need for investigation is underscored by previous sarin attacks in Syria. Inquiries confirmed the attacks at Ghouta back in August 2013 released sarin on a relatively large scale, but the perpetrators have never been formally identified. There is convincing evidence that surface-to-surface rockets were used, which the Syrian military, not the opposition, were believed to possess. However, the UN Security Council excluded the Ghouta attacks from the JIM’s mandate, limiting its scope only to investigating allegations that the OPCW has confirmed involved chemical agents since 2014. Moreover, an OPCW report from last August detailed discoveries of precursors for agents like soman and VX at several undeclared facilities in Syria. In other words, while the OPCW has verified that all of Syria’s declared chemical weapons have been destroyed, it has not been able to confirm the entire program has been eliminated.

The U.S. strikes are likely a one-off, sending a “message” that the use of chemical weapons will no longer be tolerated, although the messaging required further clarification and explanation. White House press secretary Sean Spicer said last week that the administration would respond in a similar fashion “if you gas a baby or if you put a barrel bombing to innocent people.” Spicer had to later clarify that if the barrel bombs—a weapon routinely used by Syrian forces—contained chemical agents, then a military response would be possible. President Trump stated that the United States would not get involved with Syria, but would continue attacks if the use of chemical weapons is repeated. As the messaging is being refined, the Trump policy seems to be one of counterproliferation.

In their Final Communiqué on April 10–11, G-7 leaders stated that U.S. action against the Shayrat airfield “was a carefully calibrated, limited in scope response” to the attacks at Khan Sheikhoun “in order to prevent and deter the proliferation and use of deadly chemical weapons in Syria.” After the meeting, U.S. secretary of state Rex Tillerson stated the U.S. strikes were a matter of national security: “We do not want the regime’s uncontrolled stockpile of chemical weapons to fall into the hands of ISIS, or other terrorist groups and want to attack the United States and our allies.”

In the lead-up to his meeting with Russian foreign minister Sergey Lavrov, Tillerson pointed fingers at Russia for failing in its responsibility to uphold numerous UN Security Council resolutions on Syria’s chemical-weapons program. He stated that it was “unclear whether Russia failed to take its obligation seriously or Russia has been incompetent.” Meanwhile, Russia is digging in with its support for Assad, claiming opponents and rebels were responsible for “false flag” chemical-weapon attacks as a means to draw in the United States into the Syrian conflict. Putin recently stated that Russia has information that more of these attacks are planned to blame the Assad regime as a pretext for further military action.

As the first bilateral meetings between American and Russian ministers of foreign affairs proceeded against the Syrian backdrop, the Trump administration became more consistent in its messaging that it is willing to use force to counter the proliferation and use of chemical weapons. The decision to pull the USS Carl Vinson from planned naval military exercises in Australia and send it towards the Korean Peninsula suggested that the administration’s messaging may include using force to counter the proliferation of nuclear weapons. Using counterproliferation to guide foreign policy is a familiar one. As noted by Aaron Blake, the Trump Doctrine is sounding suspiciously like the Bush Doctrine.

Cindy Vestergaard is a Senior Associate with the Nuclear Safeguards program at the Stimson Center.