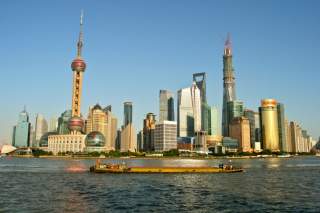 On Friday, the People’s Bank of China (PBOC), the Chinese central bank, reversed course and set the renminbi on an upward path. That followed three straight days of devaluation that shook global stock, currency, and commodity markets, sending them downward.

Friday’s reversal looks responsible. Nonetheless, the PBOC’s actions last week show policy disarray in the Chinese capital. The net result is that Beijing rattled the world, ruined its reputation for stable management, and did almost nothing to help China’s faltering economy.

The daily devaluations follow months of government statements that the central bank would keep the currency stable.

Every trading morning, 15 minutes before the 9:30 opening bell, central bank officials announce the day’s reference rate against the U.S. dollar. The renminbi, informally known as the yuan, is then allowed to rise or fall 2% from that rate.

On Tuesday, the PBOC also announced a new policy. The central bank said it would henceforth “refer” to the previous day’s close when determining the succeeding day’s reference midpoint rate. It then noted it would also consider the supply of and demand for foreign exchange and the rates of major currencies.

China’s new system was a major reform, a promise to allow the market to set the daily reference rate. “The new mechanism for determining the central parity of the renminbi,” said an IMF statement on Tuesday, “appears a welcome step as it should allow market forces to have a greater role in determining the exchange rate.”

We should hold the praise, however. Crucially, the central bank did not say how it will weigh the factors it enumerated, thereby keeping complete flexibility in rate setting. Events during the week showed how little in reality the central bank had conceded to the market.

On Thursday, Zhang Xiaohui, an assistant governor of the bank, signaled Beijing wanted its currency to rise. “Currently, there is no basis for the renminbi exchange rate to continue to depreciate,” she said.

Not surprisingly, the following day the central bank forced up the value of the renminbi with its high fixing. And to make sure it got what it wanted, in the final 20 minutes of the trading day at least two state banks sold dollars to support the “redback.” The tactic resulted in a 0.2% increase during those moments.

The central bank orchestrated similar state bank dollar-selling on Tuesday through Thursday as well. When it counts, Chinese leaders do not trust the market and find some way to interfere with it.

Clearly, China’s currency wants to fall more than Beijing thinks advisable. The country is growing not at the 7.0% that Beijing claims for each of the first two calendar quarters of this year. It’s more like the 2.2% that people in Beijing are privately talking about, and even that figure looks high when one considers underlying indicators.

In the first half of this year, rail freight was down 10.1%, trade volume was down 6.9%, and construction starts by area were down 15.8%. Electricity consumption? That rose, but only by 1.3%, and that figure was undoubtedly inflated upward. The New York Times has written about the false reporting of this number, and statistic mavens can talk about difficult-to-explain abnormalities in the power figures.

Sector-by-sector, output statistics for the first half were either off or up by only small percentages. Most tellingly, steel production fell 1.3%, the first such drop in almost 20 years.

China, in short, is fast approaching a contraction. And currency movements are anticipating it.

In fact, the deteriorating economy is thought to be the trigger for Tuesday’s devaluation. After all, the central bank cheapened the currency only a day after the Ministry of Commerce announced that China’s exports fell 8.3% in July from the same month last year. The drop was far larger than consensus estimates indicated.

Beijing denies that the currency move had anything to do with boosting exports—a Xinhua commentary unconvincingly implied that trade benefits are just a “byproduct” and not a “goal” of the devaluation—but the deval seems senseless if that was not the purpose.

The problem with the adjustment in the exchange rate is that a 2.8% decline will not have a positive appreciable effect on exports—or anything else for that matter.

Moreover, small changes like this one are the worst way to depreciate a currency. They signal that a currency will lose value and then give market participants time to dump it. The dumping of the currency, of course, just adds to the downward pressure. The result? More devaluations, usually in rapid succession.

Better to follow the consensus advice on devaluation: do it just once, do it big, take everyone by surprise, and leave no incentive to attack your economy. That is what Beijing did in 1994, implementing a one-time 33% devaluation.

The 1994 devaluation worked. Today, Beijing cannot make a big one-time adjustment as it would trigger a wave of defaults. Chinese companies have gorged themselves on cheap dollar and euro loans and converted proceeds into renminbi. Then they refused to hedge their currency exposure. Last week’s devaluations, therefore, will make repayment more expensive. So far, Beijing, with its devaluations of the renminbi, has added about 92 billion yuan to companies’ repayment obligations.

The corporate debt load, consequently, limits Beijing’s options to stimulate the economy. That’s alarming because monetary stimulus is no longer effective, fiscal spending creates too much debt, and fundamental economic reform is politically impossible. The stock market boom—supposed to trigger increased consumption—has turned into a bust, now a dead end for Beijing.

Analysts are fond of saying China’s technocrats have the tools to get the economy going again, but that assessment is obviously optimistic. What we do know is that Beijing, by devaluing its currency, is now doing what it has insisted for months it would not do and what it insisted for months would not work.

That reeks of panic and desperation.