Dick Cheney Doesn’t Have a Clue on How Diplomacy Works 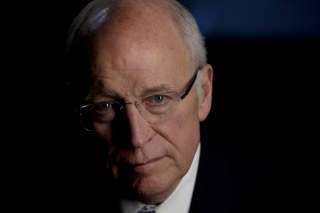 If you happened to miss former Vice President Dick Cheney’s speech on the Iran nuclear agreement (see above) at the American Enterprise Institute this Tuesday, don’t fret.  If you’ve seen one Cheney speech on foreign policy or national security, chances are that you’ve seen them all.

Like his previous statements on Saddam Hussein’s supposed weapons of mass destruction in 2002 and 2003 (WMD’s, according to Cheney, that were going to wipe out millions of Americans if the United States didn’t go through with an all-out invasion), the Vice President’s remarks against the Joint Comprehensive Plan of Action thirteen years later were nearly identical in tone. Rather than straight-up facts, Cheney relied on a combination of fear, inaccuracies, distortions, and faulty assumptions about what the JCPOA says and what it attempts to achieve.

“This deal,” Cheney said, “gives Tehran the means to launch a nuclear attack on the U.S. homeland.”  This assertion was one of the more ridiculous statements that the Vice President used to drill home the point he was trying to make during his entire speech: President Obama is dangerously naïve and is basically selling the Iranians the world’s deadliest weapon.

Americans deserve all of the information on the JCPOA, not spin or hyperbole that conjures up flashbacks to the fall of 2002 or the spring of 2003 when the Bush White House was preparing the American public for a conflict that was labeled unavoidable. That information did not come out of Vice President Cheney’s mouth.  Instead, what viewers got was the same old swan song with the same old themes that are so familiar that is doesn’t bear repeating: Obama is the 21st Century version of Neville Chamberlain; the next President of the United States needs to clean up the mess that Obama left behind; the Iranians are primed to wipe Israel off the map; and history will eventually deem the Iranian nuclear agreement one of the most feckless and idiotic diplomatic settlements that the world has ever seen.

Here are the facts:

Cheney: “Along with a pathway to a nuclear arsenal, President Obama’s agreement will provide Iran with funds and weapons the regime will use for the support of terror, the dominance of the Middle East, and the furtherance of Tehran’s efforts to destroy Israel, threaten Arab regimes, and prevent the United States from defending our allies and our interests in the Persian Gulf and beyond.”

The Facts: Whether we like it or not, Iran was always going to receive economic sanctions relief from any agreement that the United States and its allies negotiated.  The reason that Ayatollah Ali Khamenei permitted his negotiators to sit at the same table with the United States in the first place was because he understood that reaching a viable way forward would allow his government to get access to the tens of billions of dollars that are currently held up in foreign escrow accounts.  If Tehran was not guaranteed the lifting of sanctions, there was simply no reason for Khamenei, President Hassan Rouhani, and Foreign Minister Mohammad Javad Zarif to engage in the diplomatic track.

Cheney: “We are asked to rely on the word of a country that has cheated on every nuclear agreement to which they have been a party that once they have the means in place to become a nuclear power, they won’t do it.”

The facts:  With remarks like these, one wonders whether Vice President Cheney even bothered to sit down at his home in Wyoming and read the agreement.  Without sounding like a broken record, nothing in the Iranian nuclear accord is based on trusting the regime; it is based on a strict, multi-layered verification system that compels the Iranians to provide the IAEA with access to any site that the agency requests.  And, if the Iranians refuse, the U.S., Germany, France, the UK, and the European Union will push through a resolution on the Joint Commission that forces the Iranians to provide that access. What does the Cheney think the nuclear inspectors will be doing?

Cheney: “In the secret talks, before the actual negotiations even began, the U.S. side appears to have made three key concessions.  They agreed to drop the long-standing demand of the international community that Iran halt uranium enrichment. They agreed to provide immediate sanctions relief, and they agreed to pay the Iranians to negotiate by releasing $12 billion in frozen Iranian assets.”

The Facts: On Cheney’s first point, he is right: the Obama administration did in fact drop the U.S. demand that Iran stop enriching uranium before negotiations begin. But there’s a good case to be made that the reason President Obama embraced this change in policy was because the “long-standing demand” of no enrichment wasn’t working. The closest President Bush got to negotiating with the Iranians during his two terms in office was in 2008, when U.S. diplomat met with an Iranian official for the first time since on the nuclear issue.  And even then, talks broke down over Washington’s insistence on a halt to all uranium enrichment. The result of sticking with a failing strategy?  A climb in Iran’s centrifuge stockpile from zero to 5,000, a point that Cheney himself casually dismissed when pressed by Fox News Sunday’s Chris Wallace.

On Cheney’s two other points, he is absolutely mistaken.  Iran did not receive “immediate sanctions relief” as he claims.  What Iran got in return for halting production of 20% enriched uranium and capping production of low enriched uranium was a slow rollout of about $700 million per month under the interim Joint Plan of Action. Iran didn’t get money for simply negotiating; they got it by ceasing critical elements of its nuclear program.

The Facts: Cheney is wrong again.  Sanctions on Qassem Soleimani that were passed by the United Nations Security Council as it relates to Iran’s nuclear program will be suspended before being terminated.  Unilateral U.S. sanctions authorities on Soleimani will remain on the books, and EU sanctions as it relates to Soleimani  or the IRGC will be lifted in eight years.  Bank Sadarat, designated for moving funds to terrorist organizations, will be lifted from the EU sanctions list in eight years, but the fact that the bank will remain on the U.S. list permanently will likely dissuade European investors from dealing with the firm.

Cheney: “A far better deal is still possible, and it begins with reasserting our original objective on each of these matters: Iran must halt its enrichment and reprocessing activities.  It must halt its ballistic missile activities.  It must provide a full and complete accounting of all its past nuclear activities. It must allow complete go anywhere/anytime access, including at military sites. There should be no sanctions relief until Iran has fulfilled these obligations. If Iran chooses not to do so, they must understand that the United States stands ready to take military action to ensure they do not acquire a nuclear weapon.”

The Facts: What Cheney is effectively arguing for is the return of the U.S. policy during the Bush administration: the U.S. will not enter diplomacy with the Iranians unless they capitulate on the entirety of its nuclear program and give up on uranium enrichment.  That position didn’t work then, and it’s not going to work now.  In an ideal world, Tehran would scrap their program and any domestic nuclear infrastructure that they have.  But we live in the real world, where the Iranians have demonstrated time and again that they will resist surrendering to the international community without getting something hefty in return.  In Cheney’s view, no diplomatic process should occur with the Iranians unless Khamenei orders his scientists to stop enriching.  The notion that this would work when Iran is in a stronger position than they were during the Bush administration (back then, Iran had a few thousand centrifuges; now it has a total of 19,000) is a fantasy.