Did Colombia Vote for More War? 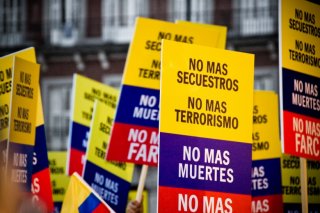 It is a story worthy of the pen of the late Colombian writer Gabriel García Márquez. On September 26, after a conflict lasting fifty-two years, and years of arduous negotiations, Colombia’s elected-President Juan Manuel Santos joins with Rodrigo Londoño, aka Timochenko, self-appointed leader of the narco-guerrillas of the Revolutionary Armed Forces of Colombia—People’s Army (FARC) to vow friendship and sign a peace agreement. Present in Cartagena to witnesses the historic event: John Kerry, Secretary of State of the world’s greatest democracy, the peripatetic UN Secretary General Ban Ki-moon and dictator Raúl Castro, brother of Fidel and former protégé of the patron saint of armed revolution in the Americas, Ernesto “El Che” Guevara. Cameras snap, white doves flutter, AK-47s and RPGs instantly become ploughshares! Let the peace party begin!

In order to wean FARC from its ruthless penchant for violence, drug trafficking and general mayhem, Santos and his negotiating team develop a comprehensive package. What was to have been a short negotiation turns into a four-year ordeal. Even the Obama Administration, deeply committed to the process, jumps aboard the peace train, dispatching veteran diplomat Bernard Aronson to work with the parties and arranging for Secretary Kerry to sit down cordially with FARC leadership in Havana in March, during President Obama’s love feast with Raúl Castro.

The peace deal promises a major makeover for Colombia. It guarantees the hugely unpopular FARC a minimum quota of political power. It assumes, almost magically, that professional insurrectionists and narco-traffickers will redirect their energies from violence and crime to expanding democracy and social progress. Accountability for atrocities, war crimes and illegal gains from cocaine are downplayed and punishments appear more symbolic than substantive. The Colombian government also promises a transformative socio-economic new deal predicted to cost $30 billion dollars.

With peace in our time, pundits and prognosticators foresee an easy path to victory in a popular referendum, perhaps by as much as a 2:1 margin.

On October 2, Colombia votes and by the slenderest of margins—50.2 to 49.8—the 12.7 million voters said No to the agreement. A majority of the minority has spoken. 68 percent of Colombian voters sit out the referendum. A hurricane keeps many potential Yes voters at home. Comparisons are made with the Brexit surprise in the United Kingdom. Once more the experts get it wrong.

A vote for more war? No. A vote for a more just peace? Yes.

Among other things, the triumph of the No vote demonstrates the continued political clout of former president Álvaro Uribe (2002–10), a fierce warrior of a politician, recipient of the U.S. presidential Medal of Freedom and rescuer of the Colombian state. Millions of Colombians have not forgotten that it was Uribe’s whole-of-government “democratic security” program that put the state, not the guerrillas in the driver’s seat. It is also truly ironic that the leadership team that delivered a striking strategic defeat to FARC and drove it toward the negotiating table was President Uribe and his Minister of Defense Santos. Their bitter political duel and Uribe’s campaign against impunity has been a cover story in Colombia for years.

Uribe speaks inconvenient truths and awakens doubts about the Santos-led agreement. Deeply disturbing to many Colombians are the injustices or lack of justice in the transitional justice process. Fears are aroused that disarmament districts and peasant reserves might lead to guerrilla states within the state. The international left and the friends of FARC decry the nefarious influences of Uribe, a “murderous rightwinger.” Even Human Rights Watch.

Many rightfully doubt FARC’s commitment to pluralistic, market democracy.  At best its political concepts revolve around agitation, political subversion, infiltration and “participatory democracy.” FARC’s ability to tap secretive resources from its drug earnings remains worrisome. In a bid for political power FARC would most likely follow the paths to elected authoritarianism blazed by the late Hugo Chávez in Venezuela, Evo Morales in Bolivia and Daniel Ortega in Nicaragua.

President Santos confesses: there is no Plan B. As he and his team desperately scramble to preserve peace and Colombia teeters on the brink of renewed conflict, word arrives from faraway Oslo on October 4 that Santos will be the next recipient of the Nobel Peace Prize, awarded for a peace he may not be able to deliver.

Colombia now enters uncharted territory. Santos remains ready to negotiate and will surely not willingly unleash the armed forces. Like the Bolsheviks in 1918 when confronted with defeat at the hands of a militarily superior Germany, FARC may answer with a policy of “neither peace, nor war.” It is premature to see how the scenarios will play out. Peace experts, nevertheless, are rushing to fill the void.

Like an untended garden, Santos’s Colombia appears mired in problems outside of the peace process: flat economic growth, deflated oil prices, increasing government deficits and faltering competitiveness. Colombia’s infrastructure is woefully inadequate and its health and education systems under increasing stress. Many urge Santos to turn his attention to addressing mounting domestic problems ahead of the 2018 presidential elections.

What then are U.S. stakes and interests in this truly complicated affair? As former Assistant Secretary of State Roger Noriega notes, the United States has invested $10 billion in economic and security assistance to Colombia since 1999. Plan Colombia, with steady bipartisan support, remains a major U.S. foreign policy achievement.

Colombia is a key geopolitical space because of its numerous population, its resources, its deeply-rooted criminal structures and its extensive border with Venezuela. In view of the impending political and economic implosion of Venezuela, Colombia must remain a point of regional stability.

The United States remains concerned about expanding potential for cocaine production in Colombia. It increased, according to authoritative surveys, by a staggering 46 percent between 2014 and 2015, meaning the country now has the resources to produce 646 metric tons (712 U.S. tons) of cocaine. Suspension of aerial spraying, severe reductions in manual eradication (workers and troops cannot enter coca fields protected by FARC mines), inadequate programs of crop substitution and higher prices for coca leaf have powered the increase in illicit production.

The United States cannot fall dormant with regard to FARC. As Noriega reminds us, there is a continuing need for U.S. and European financial authorities to intensify their efforts to locate and seize billions of FARC assets and channel them to state-run development and security programs. U.S. intelligence and security cooperation must persist in order for Colombia’s military and police to deter, detect, and defeat any involvement of FARC in the lucrative drug trade. Deprived of narcotics resources, FARC will continue to wither, peace or no peace.

The United States can also encourage forward movement on such matters as demining—an undertaking Secretary Kerry has fully embraced—and for which the United States seeks global buy-in. FARC cooperation in mine-removal is a win-win situation.

The Colombia peace saga is far from ended. Ever-present realities—the historic memory of wounds and injustices committed in a half century of conflict, mutual suspicions, concern for impunity for extraordinary crimes, distrust of government and guerrilla elites—have emerged to make the climb to lasting peace in Colombia even more difficult than was imagined just weeks ago. The world now awaits the next Colombian chapter.