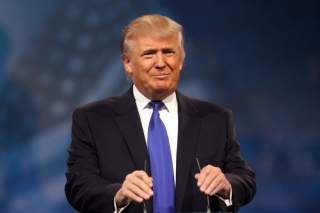 Donald Trump was finally put in his place. Led by Carly Fiorina, who hit back with a pithy retort referring to his putdown of her looks that drew applause from the Reagan Library audience, the “other ten” slowly but surely put Trump on the defensive. When Trump attacked Fiorina’s record at Hewlett-Packard, she pointed to his four bankruptcies. And when Trump bloviated about how he made a fortune in Atlantic City, Chris Christie, in whose state the town is located, argued that it was time to get serious about issues and not behave like junior high schoolers.

Trump aimed his first potshot at Rand Paul. But the Kentucky Senator came across as thoughtful, even if his America First policies did not capture the hearts of any but his previous true believers. Jeb Bush put up with Trump’s barbs for a while, until the New Yorker attacked his brother for not protecting Americans. That was too much even for the gentleman that Bush is, and he snapped back that America had not been attacked since 9/11. The retort left Trump speechless, as did the candidates’ efforts to discuss foreign and national security policy seriously.

A snap Drudge poll shows that Trump won the debate by a landslide. It is, of course, not clear who actually voted in the poll, which is akin to voting for baseball all-stars (fans are encouraged to stuff the ballot boxes for their hometown stars). CNN, not generally known as a supporter of conservative causes, did its utmost to focus on Trump—after all, he is the Democrats’ favorite candidate because he is the one who would be the most likely to get clobbered in the general election. It was therefore hardly a surprise that Jake Tepper, the debate moderator, gave Trump the most time on air, allowed him to interrupt the others while frequently cutting off those who tried to respond to him, and constantly posed questions that centered around one or another of Trump’s incendiary campaign statements.

But Trump did not win the debate at all. He was constantly red-faced, and was forced to recant on some of his ad hominem attacks and to modify others. At the same time, Bush strongly defended his position on immigration and credibly argued for a tougher national-security posture; Marco Rubio and Ted Cruz articulated a detailed case for a robust national-security policy; Fiorina threw out numbers of Marine battalions, Army divisions, Navy ships and Air Force planes. And from Trump? Nothing. He avoided articulating numbers, whether in relation to defense or anything else. He was noticeably silent about the cost of the immigration proposals which launched his campaign. His inability to deal with details of any kind, on any issue, hardly bespoke his self-proclaimed negotiating prowess and business acumen.

All candidates inject the personal into their speeches. Christie talked about his wife working near the World Trade Center on 9/11; Fiorina talked about the child she lost to drugs. But Trump sank to a new level of nastiness when he attacked Columba Bush because she was a Mexican-American. Bush took the high road in defending her admirably, making Trump look not only like a bully, but a bully of the meanest kind.

When the moderators turned the debate into reality tv, Trump was the winner by far. No one can outshine the star of “The Apprentice” when he is operating in his own make-believe element. As soon as matters got serious, however, he was quickly silenced. Moreover, Trump also was notably silent when it came to criticizing Hillary Clinton, unlike his other rivals on the stage. His retorts that he was chummy with Democrats because he was in the business of buying politicians of all stripes never won him applause.

Whatever the Drudge poll might have shown, Trump was not the winner of this debate. Nor, for that matter, was the mostly silent Ben Carson, whose grasp of foreign and national security policy left much to be desired. Likewise, John Kasich was nowhere near as strong as in the previous debate; and his claim to be a Reagan hawk was belied by the fact that as a Congressman, he opposed Ronald Reagan’s defense-budget increases. Finally, neither Mike Huckabee nor Scott Walker did much to increase their standing in the polls. On the other hand, Fiorina, Rubio, Christie and Bush all did well, with Fiorina establishing herself as a force to be reckoned with as the campaign unfolds.

The Republican field of seventeen is already down to sixteen with former Texas Governor Rick Perry having recently faced the reality of a campaign going nowhere. Others are sure to follow. The next debate will certainly feature a smaller field. Trump will be part of that field, and may even get post position once again. But his balloon has been punctured, and will certainly fizzle out before the primary season comes to a close.