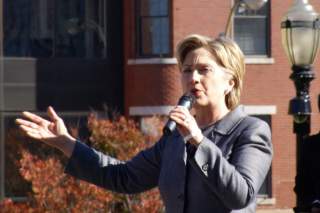 The sophisticated military operations of ISIS, Al Qaeda and their affiliates require significant financial resources. It is common sense that cutting off terrorist access to money will dramatically reduce their ability to procure weapons and support their mercenary fighters, and will quickly cripple their global Jihadi movement. And where does Hillary Clinton, who served as Secretary of State during President Obama’s first term, fit in?

Many Americans will recall the scandal involving the corrupt Bank of Credit and Commerce International (BCCI) in the 1980s and early 1990s. But most Americans are unaware of the connection between BCCI and Hillary Clinton when she was working for the Rose Law Firm.

Billionaire Little Rock Arkansas Clinton-supporter Jackson Stephens, with Bert Lance, would bring BCCI to America with the legal representation of the Rose Law Firm, including Hillary Rodham Clinton, Webster Hubbell and C.J. Giroir. Also involved were Clark Clifford (the former Defense Secretary under Johnson and lawyer for BCCI), Robert Altman (attorney for Bert Lance and Clifford's partner), and Kamal Adham (the former director general of Saudi Arabian intelligence). Rose was the law firm for the Arkansas financial group Stephens Inc. As stated by Martin Waller in The Guardian (March 24, 1994): “Stephens Inc. and the Rose law firm helped BCCI creep into the US banking market through its purchase of shares in Financial General.”

As reported by the Wall Street Journal in an article, “A Whitewater Chronology: what really happened during the Clinton years,” May 28, 2003:

New details of suspected terrorist Osama bin Laden's finances emerged Wednesday in a Senate Finance Committee hearing on money laundering. Among other things, the committee learned of a bank established by bin Laden with links to banks around the world and bank accounts at the fraud-ridden Bank of Credit and Commerce International, which was closed in the early 1990s.

This tidbit of information had been in the possession of U.S. investigators as long as a decade ago, but overlooked, a senator testified. This is because bin Laden had not then been identified as a focus of U.S. terrorism concerns.

Sen. John Kerry, D-Mass., who conducted an investigation into the fraud-ridden Bank of Credit and Commerce International, said bin Laden held a number of accounts with BCCI.

Osama bin Laden used BCCI as a main conduit for financing his operations in Afghanistan. Bin Laden founded Al Qaeda in 1988 and, as history records, Al Qaeda would engage in horrific acts of terrorism against American citizens, to include:

· Training and arming Somali rebels who killed 18 American servicemen in Mogadishu in 1993;

Senator John Kerry, the current Secretary of State, led the investigation into BCCI and released a report entitled “The BCCI Affair.” The report revealed:

BCCI's support of terrorism and arms trafficking developed out of several factors. First, as a principal financial institution for a number of Gulf sheikhdoms, with branches all over the world, it was a logical choice for terrorist organizations, who received payment at BCCI-London and other branches directly from Gulf-state patrons, and then transferred those funds wherever they wished without apparent scrutiny. Secondly, BCCI's flexibility regarding the falsification of documentation was helpful for such activities. Finally, to the extent that pragmatic considerations were not sufficient of themselves to recommend BCCI, the bank's pan-third world and pro-Islam ideology would have recommended it to Arab terrorist groups.

It is time to connect the dots. By August 1981, the terrorist banking syndicate BCCI was successful in its efforts to penetrate the U.S. banking industry—thanks, in part, to legal assistance by the law firm employing Hillary Rodham Clinton. No evidence has emerged of her direct involvement in wrongdoing related to BCCI. But it is notable that a number of the firm’s attorneys were proven, to put it delicately, to be willing to cut corners and enter into unsavory deals.

It is incumbent upon Clinton to explain that chapter of her career—and to offer clear assurances that none of the people she worked with on the BCCI matter had anything to do with her career development, her decision-making as Secretary of State, or the rapid growth in funding for the Clinton Foundation from Middle Eastern donors. Some of those associates ended up in prison for their actions, so this is no small matter. Hillary Clinton has some explaining to do.