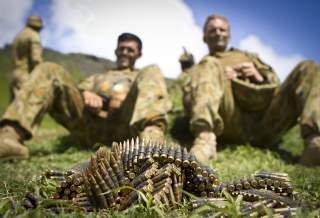 India has denied Australia’s request to send a flotilla to the annual U.S.-Japan-India trilateral Malabar exercise, to be held in the Bay of Bengal in July. Citing Indian diplomats and military officials, Reuters reported in late May that New Delhi’s decision to deny the request was intended to assuage Chinese concerns about encirclement and avoid a stronger Chinese military presence in the Indian Ocean. If true, then this would represent a misreading of Chinese perceptions: China likely would not have interpreted Australia’s participation in the exercise as a major security challenge, nor would it have overreacted. Given the potential benefits, India should consider including Australia in this exercise or in a future iteration of the exercise.

Analysts have discussed a range of possible motives behind India’s decision, including Indo-Australian bilateral tensions over several nonmilitary issues and New Delhi’s general aversion to dramatically increasingly multilateral security cooperation with the United States and its key Asian allies. But China was also a likely factor. The backdrop for India’s decision was recent tensions in Sino-Indian relations due to issues such as the Dalai Lama’s visit to Arunachal Pradesh (which China claims as “southern Tibet”) in April and India’s decision not to send a delegation to China’s Belt and Road Initiative summit in May. India’s logic may have been that denying Australia would accommodate a key Chinese interest, and thus lower the chance that Beijing would respond in a tit-for-tat manner, such as by increasing naval deployments in the Indian Ocean. China may have encouraged such thinking: a Chinese foreign-ministry spokesman alluded to this by noting that decisions regarding routine exercises like Malabar must take into account the “security concerns” of “all parties” in the region.

Indeed, developing a U.S.-Japan-India-Australia security cooperation may have once constituted a kind of “red line” for Beijing. In 2007, as part of Japanese prime minister Shinzo Abe’s vision of creating an Asian “arc of freedom,” which was strongly supported by Vice President Dick Cheney, the four countries held a Quadrilateral Security Dialogue and, along with Singapore, staged an expanded Malabar in the Bay of Bengal. Despite assurances to the contrary, including from Indian prime minister Manmohan Singh, some Chinese analysts concluded that the developments augured an “Asian NATO” that targeted China’s rise in both the Pacific and Indian Oceans, and Beijing formally demarched all four capitals. The next year, the new Rudd government exited the “Quad” after deciding that the benefits were not worth the costs to Australia’s economic relationship with China.

Over the ensuing decade, however, Chinese analysts have become less concerned about the prospects of an “Asian NATO” and more tolerant of regional multilateral-security activities, such as Malabar. Although some Chinese pundits continue to circulate the theory that the United States is seeking to coalesce its allies and partners into a kind of Cold War-style containment structure, most sophisticated analysts reject this notion. This is based on their understanding of the reasons why such an alliance is unlikely. Those include India’s nonaligned status and fundamental opposition to alliances; historical tensions and unresolved territorial disputes between Japan and South Korea; and the close economic cooperation that many states share with China, which has led many of them to avoid relying too closely on the United States as a security partner. Rear Adm. Yang Yi, a research fellow at China’s National Defence University, summed up this view by dismissing an “Asian NATO” and calling on China to “maintain the calmness of a great power.”

Chinese skepticism about the chances for an “Asian NATO” has translated into surprisingly calm reactions to U.S. multilateral exercises in the region over the last decade. This is illustrated in China’s reactions to Malabar itself: originally a bilateral U.S.-India exercise, Beijing had no comment on Japan’s participation as an observer in the 2009 and 2014 iterations of the exercise. When asked about the 2015 iteration, which is when Japan became a permanent member of the exercise, China’s foreign-ministry spokesman said that he did not think that the exercise, or those like it, targeted China. Beijing also had no public response to the expansion of Exercise Cope North—a U.S.-Japan exercise that expanded to include Australia and South Korea in 2012. Additionally, Beijing had no response to the enlargement of Talisman Sabre—a U.S.-Australia exercise that expanded to include Japan and New Zealand in 2015. It’s unclear why adding Australia to Malabar would be any more threatening to China than any of these other developments.

The specifics of Malabar 2017 are also unlikely to pique Chinese concerns. Unlike the 2014 and 2016 iterations of the exercise, which were held in the Western Pacific near Okinawa Island, this year’s edition will be held in the Bay of Bengal—over 1,500 miles from China. By contrast, Beijing has responded more assertively in the case of exercises held close to China or at sensitive times. For instance, a Chinese spokesman labeled a 2013 U.S.-Philippine island-landing exercise near the South China Sea as “reckless.” China also criticized U.S.-South Korea naval drills in the Yellow Sea in 2010, which took place just after North Korea’s shelling of a South Korean island. One plausible provocation of this year’s Malabar is that it will feature Japan’s Izumo-class helicopter carrier for the first time; but this would be a reason for China to oppose Japan’s participation in the exercise, not Australia’s.

De-emphasizing Chinese concerns and focusing on the potential benefits of expansion—such as fostering interoperability between all four navies and underscoring commitment to the shared principles of professional seamanship and freedom of navigation—argues in favor of including Australian naval participation in a future iteration of Malabar. Reports that India might not have “closed the door” on future Australian involvement are thus encouraging. New Delhi and the other three countries should also give some consideration to a renewal of the Quadrilateral Security Dialogue, which has been proposed by various scholars and officials, including U.S. Pacific Commander Admiral Harry Harris. Beijing would likely not interpret this as an incipient “Asian NATO,” but it could be useful as a way to strengthen the regional rules-based maritime order, which is certainly in the interests of all four countries and many others.

Image: Australian soldiers with Delta Company, 5th Battalion, Royal Australian Regiment wait to finish off the last of their 7.62 mm rounds after a tactical live-fire demonstration during the Rim of the Pacific 2014 exercise. Flickr / U.S. Department of Defense