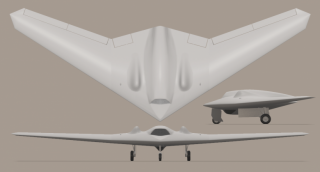 Sources familiar with the Lockheed Martin RQ-170 Sentinel unmanned reconnaissance aircraft tell the National Interest that Iran’s copy of the drone is probably a fake.

Iran’s claims that it built a 60 percent scale prototype of an unmanned combat aircraft reverse engineered from a RQ-170 that crashed over that country in December 2011. Iran claims that it downed the aircraft via a cyberattack while at least one U.S. official said that Tehran’s account might not be entirely inaccurate. Earlier in the week, Iranian state television released a video that allegedly shows the Sentinel knock-off in the air.

An aerospace engineer familiar with the RQ-170 said that the Iranian machine is most likely not a prototype, but something more akin to a remote controlled toy, given what is shown in the video footage. The original U.S.-made RQ-170 was not a small aircraft and even a two-thirds-scale replica would have a roughly 40-ft wingspan.

“It does kind of look like a 1/5 scale model,” the source said. “That takeoff sequence at the beginning seems like it was sped up or something.”

Further, the purported RQ-170 clone flies more like a scale model than a full-scale prototype. “In flight it seems to have some roll oscillations about the longitudinal axis in a few of the frames,” the source said. “The frequency of those oscillations seems to suggest it's a smaller model.”

Moreover, a civil helicopter is shown to be acting as a chase aircraft for the jet-powered drone in the Iranian footage. Given that helicopters have an theoretical maximum speed of about 200 miles per hour, a rotorcraft should not be able to keep up with the replica. “Interesting that a Bell Jet Ranger-type helo can keep up with it at 80-90 kts or so for the air-to-air shots,” the source noted dryly.

The most obvious conclusion is that the Iranian RQ-170 clone is just another fake in a long line of fakes that the Islamic republic has tried to peddle as a military breakthrough.

In February 2013, the Iranian government tried to pass off a subscale fiberglass mockup of a “stealth fighter” as the real thing. The laughable fake stealth aircraft, called the Qaher F313, was so small that the pilot looked comically large trying to fit into the tiny cockpit. The fake jet was so poorly constructed that its canopy looked like it was made from the same polystyrene material used for plastic model airplanes. Further, as numerous sources noted at the time, the Qaher was not only aerodynamically unsound—since it lacked an engine—its stealth features were also obviously incorrect. The RQ-170 clone appears to follow in the Qaher’s footsteps.

Meanwhile, Iran insists the Sentinel rip-off will be operational before the end of the year. “We have plans to bring into operation, at least, four indigenized RQ-170 drones for missions by the end of this (Iranian) year (March 20),” Brig. Gen. Amir Ali Hajizadeh, commander of the Iranian Revolutionary Guard Corps’ aerospace force told the state–controlled Fars News Agency on Wednesday.

Iran also claims that their RQ-170 copy will have the capability to perform strike missions in addition to the reconnaissance role. That would be unlike the original Sentinel, which was equipped only for reconnaissance work. “We will use it for both missions,” Hajizadeh said.

The Iranian commander taunted the United States, promising to give the country an Iranian version of the aircraft. “We will not extradite the US RQ-170 drone since it is a (war) trophy, but if the US sanctions against Iran are lifted, maybe we will give the US an Iranian model of the drone,” Hajizadeh said.