Did Israel Go Too Far Against Omar and Tlaib? 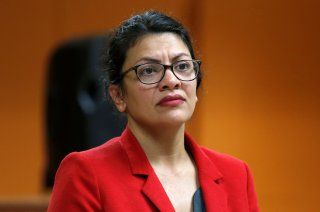 Yesterday, the Israeli government, led by Prime Minister Benjamin Netanyahu, announced that U.S. representatives Ilhan Omar (D-MN) and Rashida Tlaib (D-MI) would be barred from entering Israel or the Palestinian territories under its occupation. President Donald Trump had earlier tweeted, “It would show great weakness if Israel allowed Rep. Omar and Rep.Tlaib to visit. They hate Israel & all Jewish people, & there is nothing that can be said or done to change their minds. Minnesota and Michigan will have a hard time putting them back in office. They are a disgrace!”

Trump was widely criticized by Democrats for targeting the lawmakers and encouraging a foreign power to block their entry. Even the American Israel Public Affairs Committee (AIPAC) took issue with Israel’s decision: “We disagree with Reps. Omar and Tlaib’s support for the anti-Israel and anti-peace BDS movement, along with Rep. Tlaib’s calls for a one-state solution. We also believe every member of Congress should be able to visit and experience our democratic ally Israel firsthand.” On the left, M.J. Rosenberg, a longtime critic of Israel, wrote in the Nation “Netanyahu has made clear that the State of Israel seems to be part of Donald Trump’s far-flung empire, a place where streets and town squares are named in honor of a president whom American Jews despise.”

The two congresswomen form half of “the Squad,” the all-female group of Democratic freshmen who have created a target for President Trump. They are the first Muslim women elected to the United States Congress: Tlaib is the daughter of Palestinian immigrants and Omar immigrated to the United States from Somalia as a child. Both have endorsed the Boycott Divestment and Sanctions movement (BDS), a global, nonviolent protest seeking to change Israeli policy through economic pressure.

It is this support for BDS that triggered Israel’s response.

“I think first it’s important to note that Israel has the right as a sovereign nation to make these decisions,” explained Jonathan Schanzer, senior vice president for research at the Foundation for Defense of Democracies. “They have laws that certainly enable the government to do this based on their efforts to battle the delegitimization campaign, widely known as Boycott, Divestment, and Sanctions. And this is a movement that the two legislators have at least tacitly if not overtly supported.”

Schanzer believes the controversy is being blown out of proportion. “In 2012 the U.S. barred an Israeli legislator…Michael Ben Ari, and they barred him for his alleged ties to extremist groups in Israel. But he was a sitting legislator, and the Obama administration took this step…It’s not unprecedented, and the alliance between the two countries continued to thrive long after,” he told The National Interest.

In a released statement, U.S. ambassador to Israel David Friedman said that BDS is “no less than economic warfare designed to delegitimize and ultimately destroy the Jewish state.” Emphasizing that laws banning entry to BDS activists were proper, Friedman said Israel “has every right to protect its borders against those activists [Omar and Tlaib] in the same manner as it would bar entrants with more conventional weapons.”

Philip Weiss, editor of Mondoweiss, believes this is not the route the United States should take. “I think the proper response is the United States government should withdraw aid from Israel because it’s enforcing an apartheid policy that is pretty clear in this banning. These are two Muslim-American women of color who aren’t allowed into the West Bank. They would have been allowed into Israel with AIPAC’s trip last week,” said Weiss.

Initially, Congresswoman Tlaib appealed the Israeli decision, asking to be allowed to travel so she could visit her elderly grandmother who lives in Ramallah. She promised to respect any restrictions imposed on her and would not advocate for BDS during the visit. After Israel granted her request “on humanitarian grounds,” Tlaib reversed her position and said she would not travel “under these oppressive conditions meant to humiliate me…”

President Trump has been an enthusiastic supporter of the Israeli government’s decision, tweeting yesterday that “Representatives Omar and Tlaib are the face of the Democrat Party, and they HATE Israel.” Omar believes that this ban constitutes a pattern of behavior for the Israeli state: "The irony of the 'only democracy' in the Middle East making such a decision is that it is both an insult to democratic values and a chilling response to a visit by government officials from an allied nation."

Neither Schanzer nor Weiss believe the ban was instituted on behalf of the Trump administration, despite some speculations otherwise. It’s certainly the case that Netanyahu is embroiled in a fierce election battle and is seeking to shore up his support on the Israeli right. Barring the two lawmakers offered a chance to show that he’s unflinching when it comes to combatting BDS.

“I do think it’s safe to say there are those who seek to politicize the U.S.-Israel relationship and to undermine it, and we continue to see this as an ongoing effort,” warned Schanzer.