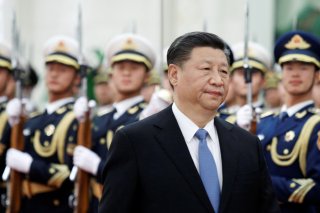 “Sinister” is how the state of Missouri describes “an appalling campaign of deceit, concealment,  misfeasance, and inaction” woven by officials of the People’s Republic of China (PRC) in its legal complaint on April 21 over the human and economic fallout from the coronavirus pandemic. In the complaint, Missouri identifies 5,800 confirmed cases, 177 Missourians dead, and untold economic damage. Quickly countering, Geng Shuang, a Chinese Foreign Ministry spokesman, said the lawsuit was “frivolous” and “very absurd.” Meanwhile, weeks before the lawsuit was filed, President Trump tweeted in March that the world is at war with a “hidden enemy” and America is at a “wartime footing” as the coronavirus pandemic spread.

Now with over eighty-thousand dead, more Americans lost than in the Vietnam War, and upwards of $2.2 trillion promised by the federal government to counter the pandemic and its calamitous effects on America, the administration may be preparing to seek reparations or other retaliatory measures against the PRC. The administration’s response would not be far off the mark from Missouri’s first of its kind lawsuit. But more importantly, if America is at a war-footing, then it is worth considering that Missouri may in fact be launching its own form of legal warfare or “lawfare” against the PRC. For national security practitioners and China watchers, this would be akin to China’s own form of legal warfare (法律战), a tactic and technique nested in its strategy known as the “Three Warfares” (三​战).

Essentially, the “Three Warfares” is a strategy meant to create and shape political power for the Chinese Communist Party, both domestically and abroad per China analyst Peter Mattis. Broken down into three distinct parts, the first of the “Three Warfares” is media or public opinion warfare (舆论战) which attempts to shape public opinion. Elsa Kania, writing in Jamestown Foundation, notes the second part, psychological warfare (心理战), as that which “seeks to undermine an adversary’s combat power, resolve, and decision-making, while exacerbating internal disputes to cause the enemy to divide into factions.” Finally, she describes lawfare, the third part and most pertinent to Missouri’s lawsuit, as envisioning the “use of all aspects of the law, including national law, international law, and the laws of war, in order to secure seizing “legal principle superiority” and delegitimize an adversary.” Ostensibly, the PRC has leveraged legal tactics and techniques such as those mentioned from territorial disputes over the South China Sea to economic arbitrations in the World Trade Organization. Moreover, growing anecdotal evidence suggests that it is becoming difficult to discern a clean break or firewall between actions of the PRC under the CCP’s party-state apparatus apart and separate from state-owned or private Chinese corporations, assets, or citizens. This is because the actions, dictates, and aspirations of the PRC prioritize dual-use, military-civilian fusion, and national strategies like Made in China 2025 make less and less of a distinction. At the moment, Beijing is using the pandemic to extend ever more control into various sectors and facets of its domestic and international influence and presence. These include placing CCP officials within the senior ranks of global information technology companies’ leadership hierarchies such as Alibaba or leveraging its commercial presence overseas tied to the Belt and Road Initiative to distribute masks and Chinese good-will, nicknamed “mask diplomacy,” to pandemic stricken countries on behalf of Beijing. Lawfare is no different in this regard.

From a national security nexus, what makes the lawsuit by Missouri so unique and noteworthy is that it seems to take on an air of the aforementioned Chinese approach to lawfare. In Missouri’s filing, the “law” is just as critical for desired effects as is diplomatic, informational, military, or economic ones that the American military traditionally employs. The Joint Staff at the Pentagon advocated just such an approach of leveraging law among other instruments in a 2018 strategy document. In this way, the lawsuit by Missouri possesses an asymmetric, almost gray zone-ish feel. It is likely that a Chinese perspective with a heavily lawfare-biased strategic perspective would perceive it as such. To be clear, the American military did not contribute to the lawsuit, nor are there links to a broader strategy by the U.S. government. Rather, it appears to be an organic, bottom-up thrust by Missouri to make its citizens and state whole from the contagion. Missouri lodged the complaint on its own accord.

Jefferson City’s legal action is bold. Yet, significant legal hurdles remain. Jurists and legal scholars are quick to cite “sovereign immunity,” which grants the PRC and nations immunity from criminal prosecution and civil lawsuit, as a high bar for the lawsuit to pass. Yet, two recent terrorism-related lawsuits have cleared just such a legal bar. lawsuits against the Kingdom of Saudi Arabia and Sudan, brought by the victims and relatives of 9/11 and the bombing of the USS Cole in 2000, have proceeded in American courts after decades and substantial legal wrangling that turned on sovereign immunity. While the lawsuit against Saudi Arabia continues to snake its way through the courts, a potential settlement was reached in February with Sudan as part of a broader sanctions relief package by America. These two cases may augur Missouri’s legal future against the PRC.

However, it is too soon to tell. Much remains to be seen in a very dynamic, geo-strategically charged time as the present amid the backdrop of great-power competition. If the lawsuits proceed and the PRC is implicated, then Missouri may be justified to go after all manners of Chinese assets and enterprises operating in the state. And American companies in Missouri with significant Chinese interests could be in jeopardy. The state’s lawsuit may even portend more legal action by other American municipalities and states, even perhaps private citizens and companies. Additionally, the Missouri lawsuit could snow-ball across as others from across the international community file lawsuits of their own. To counter, the PRC will likely challenge or ju-jitsu Missouri’s litigation with its own brand of lawfare.

Either way, as this legal battle plays out in the courts, the PRC will undoubtedly be monitoring it closely. American national security practitioners should do likewise. The lawsuit by Missouri appears to be part-n-parcel one and the same, a meld of state security and national security, inextricably linked in holding the PRC and, by default, the CCP accountable for the pandemic. It is no small order to say that the geostrategic and national security implications of this lawsuit will reverberate beyond the courtrooms in Jefferson City.

Wilson VornDick consults on China, national security, and emerging technologies for RANE and DUCO. This analysis is his own. He tweets @VornDick.