Did Obama Ignore Hezbollah to Secure the Iran Deal? 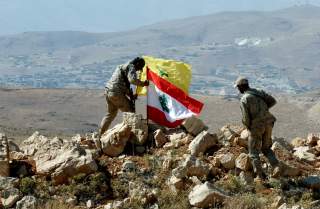 “The debate you’re seeing is political,” Emanuele Ottolenghi of the Foundation for the Defense of Democracies tells me on a call Wednesday afternoon. “The Obama administration made a pivot in the Middle East towards Iran, which involved relinquishing a number of well-established policies that the United States had pursued in previous decades-- taking the United States in unchartered territories.”

I spoke to Ottolenghi to discuss the continuing fallout over an article by Politico’s Josh Meyer that charged that “in its determination to secure a nuclear deal with Iran” that “the Obama administration derailed an ambitious law enforcement campaign targeting drug trafficking by the Iranian-backed terrorist group Hezbollah, even as it was funneling cocaine into the United States.” That ambitious law enforcement campaign was called Project Cassandra, and it was headed by a DEA Agent named Jack Kelly, along with Derek Maltz, who headed the much larger DEA Special Operations Division that oversaw the project.

A slew of Obama alumni, namely Ben Rhodes, the former national deputy advisor and influential confidante of the former president, Tommy Vietor (now of “Pod Save America” fame), and Ned Price (a prominent fixture on the liberal cable news circuit in the Trump age), have led the effort to attack the story’s veracity. Meyer has pushed hard against it, engaging with many of the criticisms on Twitter himself, and writing to me: “the Obama formers haven’t come up with a single factual issue to contest. … I responded in detail on Twitter to them, asking them to offer any specifics to back up their attacks, and to date, they have not offered any.”

The Obama allies’ effort -- and the story itself -- have not gone unnoticed in the conservative press. And during a time of an acutely media-sensitive administration, Attorney General Jeff Sessions has already called for an investigation into the allegations raised in the report, though Justice has been circumspect on the exact details. Sessions Spokeswoman Sarah Isgur Flores told me Thursday she had “nothing to add” to the statement DOJ released last week-- no new details to reveal.

“Obama Officials Manufactured Media Narrative Ahead Of Investigations Into Hezbollah Scandal,” blares right-wing stalwart The Daily Caller. The Washington Times castigates the alleged media culture around Rhodes. Breitbart News touts “evidence Obama admin protected Hezbollah to score Iran deal.” They’ve highlighted Meyer’s work before (full disclosure: mine too), unleashing evocative retrospectives on the Iran Deal such as “Obama Lied, Americans Died.” Fox News has also been on the warpath, with commentators lauding the “bombshell” report and lamenting that its not getting enough attention.

Keynote Fox host Tucker Carlson has also tackled it, much to the chagrin of some of Carlson’s fans who view him as a restrainer in foreign policy. But the nation’s drug crisis is also deeply important to Carlson and many in his orbit, and the story appears to have struck a nerve. The Meyer reporting, along with research done by FDD and others, alleges a vast narcoterrorist operation commanded and controlled by Hezbollah in Latin America, and also involving shady dealings in West Africa. Ottolenghi charges that Lebanon, Hezbollah’s home base, is on the verge of becoming a “narcostate.”

“I mean it’s one thing to say, look, we’re not going to hassle Iranian diplomats, or we’re going to look the other way, at nonsense going in Lebanon. But Hezbollah teaming up with the Zetas -- the Mexican drug cartel -- to import tons of cocaine into the United States in the middle of a drug epidemic? Seems like a pretty big thing to overlook,” Carlson said last week, while hosting neocon Bloomberg News columnist Eli Lake. But for those on the restrainer Right -- and for those who think this story in mainly a trojan horse for escalation of conflict with Iran, which Hezbollah has sworn loyalty to, Ottolenghi and others note -- Carlson, who also founded and retains an ownership stake in The Daily Caller, seemed to assuage some concerns Wednesday by going after his old foil Max Boot for an article on “white privilege.” “Max Boot will say anything if they just let him invade Iran,” Carlson’s account tweeted. Earlier this year, I highlighted the brutal exchanges he had with both Boot and uber-hawkish commentator Ralph Peters, and concluded, that Carlson had essentially declared war on the neoconservatives.

For that other Trump-era star, Steve Bannon, and “the Breitbart crowd,” the issue is also more complicated than it initially appears. Bannon is leary of greater intervention in Latin America, and as White House chief strategist occasionally went back and forth with those in the administration and in Congress who seek a harder line on for instance, Venezuela. “Venezuela, over the last several years, has been a command-and-control hub for the movement of cocaine worldwide,” Maltz said at event on Capitol Hill in October attended by House Foreign Affairs Committee Chairman Ed Royce and Ranking Member Eliot Engel. But, at the same time, Bannon is a hawk on Iran, as I’ve reported extensively.

And for critics of the Meyer story, this is about really Iran, and Hezbollah but a prelude for beating the war drums for regime change in Tehran, as prominent neocons such as Bill Kristol have openly called for. “You can say, without blushing, that you called it,” veteran national security journalist Mark Perry tells me by email, noting my coverage in October of the FDD’s renewed focus on Hezbollah. The FDD continues to wield powerful influence in the administration, especially on Iran. Expertise on the machinations of terrorist financing is also an emerging speciality of the group. As I reported last week, Juan Zarate, of FDD and the first-ever assistant U.S. secretary of the treasury for terrorist financing and financial crimes, is poised to come aboard as CIA Director Mike Pompeo’s right-hand man, should Pompeo ever succeed Rex Tillerson at the State Department.

Another veteran national security reporter is more blunt about the Meyer report, emailing: “The Hezbollah in Latin America theme should be exposed for what it is. It's not whole cloth, but … This is pure and simple, a march to war with Iran, on behalf of Israel and saying otherwise is simply a dodge.” Trita Parsi, President of the National Iranian American Council, concurs. “I think this is part of a larger effort to start war with Iran. The pretext is unimportant to the backers,” he emailed Wednesday night. “War is key because they are desperately seeking to shift back the balance of power in the region in favor of Israel and Saudi Arabia. ... The real question - which the backers of war have successfully managed to dodge - is: In what ways does war with Iran serve America's interest?”

Meyer, Ottolenghi and FDD push back on such accusations. Meyer e-mails that is “flat wrong to say there is ANY political agenda on my part, as there is, and never has been, one” and takes umbrage with the contention he is part of some anti-Iran “cabal,” as he put termed it. “I was the one who originated the idea of doing this story, in consultation with sources, including former DEA officials who had read” his previous work. “It’s the same technique they use when we were criticizing the Iran deal,” Ottolenghi tells me. “They labeled us and anyone who criticized the deal as warmongers. They’re basically trying to paint anyone suggesting an alternative path as leading us towards war.”

Here’s what that alternative path could have looked like for FDD: “I think it would have looked like a much more aggressive tool and effective tool, to dismantle -- or to disrupt -- illicit finance from the drug trade, and counterfeited goods, and illegal timber trading, and illicit trading  in Africa and God knows what else these Hezbollah guys are doing. … It would have cut down, significantly, the amount of funding for Hezbollah. … The main purpose of these networks is to raise money,” says Ottolenghi. Perhaps this is what those like Bannon have in mind.

But others, especially on the Trumpist right that supported the president during the campaign, think the Hezbollah issue is blown out of proportion. “I think there’s substantial consensus that Hezbollah is a sort of state within a state of Lebanon, confessionally divided with weak central government. It pretty much owes its existence to Israel’s serial invasions of Lebanon, and began as a local national resistance movement,” Scott McConnell, founding editor of The American Conservative, tells me. “Can be a very problematic group… but what we typically call Shi’ite terrorism more resembles what the IRA did, well organized strikes against political or military targets, than more random suicide strikes at civilians on the AL Qaeda or ISIS model. They’re a problem for Israel because unlike every other Arab army I can think of, they’ve fought quite effectively against Israelis, though always outgunned and outmanned.”

Ottolenghi, and the FDD’s Jonathan Schanzer, have warned about “the coming war with Israel and Hezbollah.”