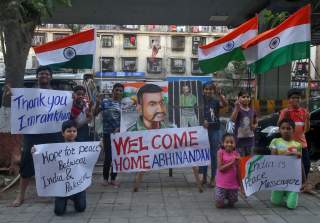 On the morning of October 24, 1962, as the JFK administration debated options for the removal of Soviet missiles in Cuba and nuclear war seemed imminent, a note delivered by a staffer brought welcome news: Soviet ships had turned away from the quarantine line around the island; they were sailing home.

Realizing the significance of the move, Secretary of State Dean Rusk turned to National Security Advisor McGeorge Bundy and whispered “We’re eyeball to eyeball, and I think the other fellow just blinked.”

Like the Cuban Missile Crisis, the ongoing crisis between India and Pakistan escalated rapidly. On February 14, a Kashmiri militant affiliated with Jaish-e-Mohammed, a Pakistan-based terrorist group, detonated a vehicle filled with explosives next to a paramilitary convoy in Indian-administered Kashmir. Over forty soldiers were killed in what became the worst suicide attack on security personnel in decades.

Almost immediately, India erupted with outrage. Across the country, thousands took to the streets in widespread protests, calling for military action against Pakistan in order to deal with the terrorist threat. Capturing the increasingly bellicose mood, Indian Prime Minister Narendra Modi vowed to “avenge” the deaths in Kashmir, pledging: “We will give a befitting reply, our neighbor will not be allowed to destabilize us.”

That reply came early on Tuesday morning, when Indian warplanes conducted a series of airstrikes in Pakistan against “non-military” (i.e. terrorist) targets, including an alleged Jaish-e-Mohammed training camp near the Pakistani town of Balakot.

Incensed by the attacks, on Wednesday Pakistan launched its own airstrikes against Indian military targets in Kashmir. Significantly, two Indian warplanes were shot down in dogfights over the contested region, with one Indian pilot captured—and swiftly paraded on national television—after he parachuted into Pakistan-held territory.

Despite their aggressive response, Pakistani officials were quick to depict the Wednesday airstrikes as purposefully designed to avoid further escalation, intended only to even the score. “This was not a retaliation in the true sense,” said Major General Asif Ghafoor, spokesperson for the Pakistan armed forces, “we don’t want a war.” This sentiment was echoed by Pakistani Prime Minister Imran Khan, who called on his Indian counterpart to “settle this with talks,” asking: “With the weapons you have and the weapons we have, can we really afford a miscalculation?”

Hearing nothing from Modi’s office, Imran Khan went even further on Thursday. In a significant gesture meant to step back from the brink, Foreign Minister Shah Mahmood Qureshi announced “We are willing to return the captured Indian pilot if it leads to de-escalation.”

Pakistan may have just blinked. Here’s why:

Since the 1999 Kargil War, Pakistan has developed a unique policy for pushing its irredentist claims in Kashmir. As described by S. Paul Kapur, an expert in strategic stability at the U.S. Naval Postgraduate School, the Pakistani playbook calls for limited conventional action in Kashmir, either directly or through proxies. If India reacts to a particularly heinous attack (as it’s doing now), Pakistan can use its nuclear weapons both as a means to deter Indian conventional aggression and to signal to outside powers—particularly the United States—that they need to get involved.

But two outside factors are necessary for this policy to succeed, and neither were forthcoming. The first requires India to feel sufficiently deterred by Pakistani nuclear weapons that they don’t apply their conventional military weight. In short, they can’t call Pakistan’s bluff.

Almost immediately, there were signs that this round was different, and India might still attack. “There’s a real exhaustion and fatigue with Pakistan in India,” said Alyssa Ayres, a senior fellow at the Council on Foreign Relations. Pakistan’s capture of the downed pilot only complicated the issue. De-escalation may look like retreat to an Indian public increasingly vocal about resolving the Pakistani terrorism issue for good. “Right now, it’s not just nuclear weapons that we have to worry about,” said Husain Haqqani, Pakistan’s former ambassador to the United States, “but social media which feeds the hyper nationalist frenzy on both sides.”

The second requirement is the outside intervention Pakistan relies on to constrain India. So far, that hasn’t materialized. Despite Pakistani calls for greater involvement by the United States, Washington appears preoccupied with nuclear negotiations in Vietnam and is unable or unwilling to give the proper bandwidth to the crisis. Secretary of State Mike Pompeo merely asked his counterparts in India and Pakistan to avoid “further military activity.” This is hardly the sort of help Islamabad was counting on.

Faced with an unusually bellicose India and a United States uninterested in bailing them out, Pakistan likely sensed that they stood to gain little—and lose everything—from continued brinksmanship. Islamabad knows that they cannot win a drawn-out conventional war with India, and neither are their nuclear weapons an attractive option. As South Asia expert C. Christine Fair put it, “while India will suffer tragic losses from Pakistani launches, Pakistan will cease to exist as a geopolitical entity after India responds in kind.”

Faced with those odds, I’d have blinked, too.

Zack Brown is a Research Assistant at the Ploughshares Fund.