Did Russia Win in Syria? 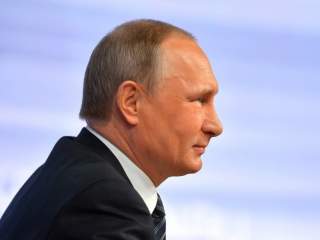 That the Russian bombing campaign in Syria continues is a subtle acknowledgment that its military objectives have yet to be achieved. While it is clear that Russian intervention helped turn the tides of war in the Assad regime's favor, it is also important not to overstate the recent military success of pro-regime forces. In contrast to the pro-regime forces' modest territorial gains on the battlefield, however, Russian intervention has done a great deal to undermine U.S. foreign policy in the diplomatic arena.

Experts were predicting the Assad regime's fall every year since the beginning of the uprising against him in 2011, but in 2015 the situation began to deteriorate quickly. In the first eight months of that year, the Assad regime lost 18 percent of its territory. In light of the powerful momentum pushing back pro-Assad forces in September 2015, Russia decided to intervene directly with an aerial campaign. The aim was clear: reversing the tides of the war and preventing the collapse of the Syrian government. By November 2015, the pro-Assad coalition of Russia, Iran, Syria and Hezbollah had managed to hold off Assad's enemies and even gain a very small amount of territory.

Despite the thousands of Russian sorties, however, the pro-Assad forces in Syria succeeded in doing little more than stabilizing the regime. From the start of Russian military involvement in Syria until January 11, 2016, according to IHS Jane's 360, the amount of territory under the Syrian government's control grew by just 1.3 percent. It is also worth noting that despite Putin's contention that he sent Russian forces to fight in Syria against Islamic State (IS), all of the government's territorial net gains were made at the expense of non-IS rebel forces while the Syrian government actually had territorial net losses to IS.

It is true that not all territory is equal, as conquering area around a major city like Aleppo would be more strategically advantageous and likely more ferociously contested than the Syrian Desert in the east. It is also true that some of the major victories of the Assad regime since the Russian intervention have been in conquering areas around Aleppo. However, one need only look at a pre-intervention map from July 2015 and compare it with a map drawn to reflect the realities on the ground after six months of Russian intervention to see a lackluster picture of the Syrian regime's territorial gains—it has managed to hold on, but little more than that.

Off the battlefield, Putin's victories were more decisive.

First, Putin's intervention on behalf of Assad further undermined U.S. credibility as an ally. The autocrats of the region watched President Obama demand that Egypt's President Mubarak step down in 2011, and then stand idly by as his successor Mohamed Morsi was overthrown. In light of that, it is hard to believe that President Sisi of Egypt or King Salman of Saudi Arabia, despite the fact that they are among the most important U.S. allies in the region, maintain any illusions about American support in times of crisis. Meanwhile, Russia demonstrated dedication to its only ally in the Arab world by continuing to support the Assad regime throughout the Syrian civil war and ultimately intervening on its behalf. This certainly increases Moscow's appeal as a potential partner for autocratic Middle Eastern regimes in the future. (It is worth also keeping in mind that with the exception of Tunisia, there are no democracies in the Arab world.)

Second, Russia exploited tension between critical partners in the U.S.-led anti-IS coalition and turned them against each other. For example, in the case of Turkey and the Syrian Kurdish YPG, the Russians supported the U.S.-backed YPG and enabled it to conquer large swaths of territory along the Turkish border. This annoyed the Turks, because the YPG forces on its border belong to a subsidiary of the Kurdish separatist group known as the PKK, which Ankara considers a terrorist organization. In response, the U.S.-allied Turks started to shell the U.S.-backed Kurds. A similar scenario unfolded when Moscow supported the YPG in its fight against CIA-backed Sunni Arab rebels. With the help of Russian air strikes, the U.S.-backed forces clashed against each other, causing one headline to declare, "America is in a proxy war with itself in Syria."

Third, Russian participation in the Syrian civil war defied the Western notion that foreign policy should be guided, at least in part, by moral principles. As Putin often criticized the U.S. for the chaos it caused in Iraq and Libya due to its desire to replace dictatorships with democracies, he demonstrated the benefits of unabashed opportunism and maintaining the autocratic order. Indeed, the low cost and neatness of Putin’s campaign was probably quite frustrating for a U.S. government that had spent trillions on wars in the region and democracy-building efforts with little to show for it. Yet the Western media continues to heap admiration on the new and more assertive Russian policies in the region, and Putin paid no political price for ruthlessly bombing hospitals in support of the autocratic Syrian regime.

Despite the fact that pro-regime forces in Syria have reconquered only a minute fraction of Syrian territory since the start of the Russian intervention, Putin’s political maneuverings have done a great deal to undermine U.S. foreign policy. However, the failure to reach a long-term ceasefire between the warring parties could wear down the tattered Syrian regime and force Russia to either give up on Assad or dig in and fight. Putin’s decision to launch an air campaign indicates that he has learned one lesson from the blunders of America’s Middle East policy from the last fifteen years—but whether this is his “mission accomplished” moment remains to be seen.

Ari Heistein is the Special Assistant to the Director of the Institute for National Security Studies in Israel.