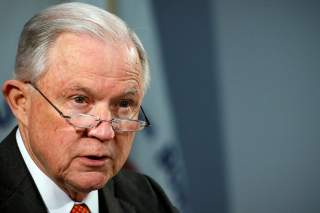 Every week brings a new “gotcha!” moment from President Donald Trump’s critics in the media and Congress. Right now much of the buzz is all about what Trump and Jeff Sessions knew about campaign underlings’ contacts with Russia in 2016. Has the attorney general been caught lying, even perjuring himself?

On Friday, CNN’s Chris Cillizza gave a rundown of Session’s supposed memory lapses or misrepresentations. Asked, “if there is any evidence that anyone affiliated with the Trump campaign communicated with the Russian government in the course of this campaign,” Sessions testified before the Senate Judiciary Committee in January: “I’m not aware of any of those activities.... and I did not have communications with the Russians, and I’m unable to comment on it.”

Later that month, Sessions responded in the negative to the question, “have you been in contact with anyone connected to any part of the Russian government about the 2016 election, either before or after election day?”

And when asked in an October appearance before the Senate Judiciary Committee, “you don't believe that surrogates from the Trump campaign had communications with the Russians? Is that what you're saying?,” Sessions replied, “I did not and I'm not aware of anyone else that did, and I don't believe it happened.”

The problem with all this is that we now know that George Papadopoulos, a Trump campaign foreign-policy advisor, had at one point raised the possibility of arranging a meeting between Trump and Vladimir Putin through one of his contacts, the Russian ambassador in London. Sessions was in the room in the now-famous March 31, 2016 meeting of Trump’s foreign policy team in Washington, DC when this was mooted; indeed, he was the one who shot the idea down cold. Sessions knew about that contact, and he was supposed to know about the trip to Moscow that another foreign-policy advisor, Carter Page, took in July 2016. Page himself told Sessions about the trip beforehand.

Even some Republicans—albeit Republicans notably hostile to Trump—have said that Sessions has some explaining to do. On “Fox News Sunday,” Lindsey Graham said Sessions “should come back [before the Senate Judiciary Committee] and answer the question yet again ‘did you know anything about an effort by the Trump campaign to meet with Russia, not just collude with Russia.’” He added, “this is getting a bit old with Jeff Sessions,” though Graham insisted that “There's nothing wrong with Trump meeting with Putin if he wanted to. It would be wrong to have the Russians help the Trump campaign.”

That should be the nub of the matter, and indeed Russian coordination or other meddling in the 2016 campaign was what the questions Sessions answered before the Judiciary Committee were meant to be about in context—not whether anyone connected with the Trump campaign had ever met a Russian. Vanity Fair’s T.A. Frank, hardly a Sessions or Trump sympathizer, poured cold water on the week’s perjury hype for just this reason.

Yes, Sessions heard, and shot down, a suggestion from Papadopoulos of setting up a meeting between Trump and Putin—something that obviously wouldn’t be secret, were it to take place. It’s hardly a discussion of “interference.” As for this week’s CNN headline blaring that “Carter Page testifies he told Sessions about Russia trip,” the trip Page took in the summer of 2016, shall we recall who else, besides Jeff Sessions, knew that Carter Page was taking a trip to Russia? You. Me. Everyone. It was extensively covered at the time and soon after. Page’s speech is available on YouTube. Sessions would have been insane to try to hide it.

Page’s trip to Moscow in July 2016 was purportedly not undertaken as a representative of the Trump campaign, and campaign spokeswoman Hope Hicks said at the time that Page’s remarks in Russia did not reflect the campaign’s views. Any commentator might challenge these claims—but on what basis? Where is the dividing line between a private trip abroad undertaken by someone involved in a campaign and a campaign-related excursion? Page’s Moscow trip was criticized as improper at the time—it was certainly unusual. But it wasn’t secret, and if it was undertaken for some nefarious purpose of stealing an election with Russian help, no evidence has yet surfaced even to suggest as much.

As for Papadopoulos, Session’s firm “no” to the suggestion of a Trump-Putin meeting points not toward but away from collusion. When offered the opportunity to develop a Russian diplomatic contact that could lead to Putin, Sessions turned it down on behalf of the campaign. Sessions himself did run into the Russian ambassador to the United States at the time, Sergey Kislyak, at a large event (attended by some fifty ambassadors) during the Republican National Convention and exchanged pleasantries with him; he also met with Kislyak in his Senate office in his capacity as a member of the Senate Armed Services Committee, or so he has claimed. These are slender reeds upon which to build a case for conspiring against the Republic, though it seems likely that Senator Graham will get his wish to see Sessions called before the Judiciary Committee again. If Sessions is not more careful about his answers, or if the senators are more wily about their questions, some could indeed claim perjury. But that without some evidence of actual wrongdoing with respect to Russia—a “coverup” without a crime—would be a travesty. It would be the world’s worst game of “telephone,” not a breakthrough in the next Watergate.

On one level, the hype does most harm to those who believe it: pundits, Democrats and the half-dozen Never Trump Republicans who still remain are setting themselves up for psychological deflation when the investigations fail to live up to their sensational press. But there are chilling effects to the hype, too: will any lawmaker or official who has ever been in the same room as a Russian now be a suspected puppet of Putin? And there’s no reason the suspicion should stop with the Russians. Why not the Chinese, too? Why not the Turks? Every country on earth has formal and informal representatives circulating in Washington.

It’s also the case that the Trump campaign simply set the bar too high in denying any and all contacts with Russia. It would have been normal for the campaign to have contacts with foreign governments, whether in Russia or Israel or Germany or China. The Washington Post reports that Trump’s attorney Ty Cobb has now begun to walk back the blanket denials: “I think the American public can fully appreciate that those are isolated, obviously disconnected events, quite small in number for a presidential campaign. Nothing about the actual facts published to date suggests that the president while he was a candidate ever met a Russian, ever spoke to a Russian, or colluded with anybody.” The key will of course hinge on whether they were isolated events or, as others allege, it all amounts to something more sinister.

Meanwhile, the investigation itself could drag on for years, though Mueller does appear to be moving expeditiously. But many in the media appear intent on committing hysteron-proteron in assuming that the outcome is a foregone conclusion. They made that mistake with the general election a year ago. Do they really wish to replicate it?