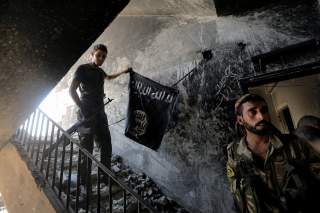 “We’re gonna beat ISIS very, very quickly, folks. It’s gonna be fast. I have a great plan. It’s going to be great. They ask, ‘What is it?’ Well, I’d rather not say.”

Donald Trump made this pledge to supporters in Connecticut in April 2016. At the time, it seemed unlikely he would ever have to make good on the promise. After all, Hillary Clinton led comfortably in the polls. However, Trump’s surprise victory gave him the chance to back up his claim. Many were openly skeptical he could do it.

But one year into the Trump administration, the facts on the ground—in Syria and Iraq—have changed dramatically. ISIS lost control of Mosul, the second-largest city in Iraq, in July 2017. Three months later, ISIS’ capital—the Syrian city of Raqqa—fell. Many fighters retreated to Deir ez-Zor in the country’s east. In November 2017, that too fell. The ‘Caliphate’ that Abu Bakr al-Baghdadi announced with such fanfare in the summer of 2014 was in tatters.

So was Donald Trump right all along? Did he have a secret plan? And is ISIS now defeated?

The United States was already at war with ISIS prior to Trump’s election, working with local partners to take back the territory the terrorist army had gained in Iraq and Syria and carrying out airstrikes in support of that mission. Progress was undeniably slow and, days after being inaugurated, President Trump signed an Executive Order requesting a Pentagon-led review be provided to him within thirty days on how ISIS could be defeated.

Calling this a “secret plan” would be generous, but tactical tweaks did quickly began to appear. Secretary of Defense James Mattis outlined that President Trump “delegated authority to the right level to aggressively and in a timely manner move against enemy vulnerabilities.” This meant that when those on the ground requested airstrikes, fewer layers of sign-off were required; the approval process was decentralized and, subsequently, faster.

Administration officials cite a March 2017 example of when U.S.-backed Syrian Democratic Forces (SDF, a Kurdish and Arab fighting force battling ISIS) asked for U.S. air transport for a surprise operation in Taqba, a Syrian town on the Euphrates and where ISIS controlled a dam. Those on the ground gave approval immediately, and the U.S. quickly air-lifted the SDF fighters. Located just twenty-five miles from Raqqa, the taking of Taqba was a major stepping-stone in the overall push into Raqqa.

Mattis has also said that another change was a “shift from shoving ISIS out of safe locations in an attrition fight to surrounding the enemy in their strongholds so we can annihilate ISIS.” The purpose behind this, Mattis outlined, was to dry up the flow of foreign fighters leaving the region.

Undeniably, the foreign-fighter flow was stunted. In October 2017, Chairman of the Joint Chiefs of Staff General Joseph Dunford stated that, “We don’t see large numbers of fighters coming out of Syria and Iraq. The numbers that we’re seeing in other places that have come from Syria and Iraq are fairly small numbers.” (What is unclear, however, is causation; recent reporting has suggested that European fighters, for example, may have relocated to Turkey or more remote parts of Iraq or Syria).

Another shift came in the role of U.S. troops in combat operations. During the fight for Mosul, hundreds of U.S. Special Forces operators were given latitude to work much closer with their Iraqi partners. Lt. Gen. Stephen Townsend, the head of U.S. military efforts in Syria and Iraq confirmed that “We are operating closer and deeper into Iraqi formations.”

Welcome tactical changes aside, on the broader strategic picture the administration has not strayed far from the policy of previous presidents.

An unwillingness to allow Islamist terrorists access to safe-havens from which to plot attacks has been a largely uncontested U.S. government policy since 11 September 2001, as has been the commitment to work with international partners. Furthermore, a preference for a lighter military foot print, reliance on air strikes and provision of training, logistical and intelligence support to local allies are straight from the Barack Obama playbook.

A consequence of the Trump administration accepting certain strategic premises from the Obama administration is that it also accepts the flaws. Just look at the SDF, the U.S.-backed force formed in the fall of 2015 and doing much of the fighting against ISIS.

Understanding the inherent flaws behind the SDF means having to delve into the world of transnational Kurdish militancy. It begins with the Kurdistan Workers Party (PKK), a Marxist organization that aims to create a Kurdish state in Turkey’s southeast. The PKK is a sworn enemy of Turkey, a member of NATO, and was designated a foreign-terrorist organization by the State Department in 1997 due to its ongoing attacks on Turkish targets.

In 2003, the PKK formed a Syrian faction, the Democratic Union Party (PYD). A year later, an armed wing of the PYD emerged called the People's Protection Units (YPG). The YPG is the dominant force within the SDF, and while the United States regards the YPG as a key partner in the fight against ISIS, the YPG, PYD and the PKK are aligned both organizationally and ideologically.

So it is Kurdish Marxists—described to me by CNN national-security correspondent Michael Weiss as an ‘ideological personality cult’—that are holding the deeply conservative, Sunni tribal territory in Syria once controlled by ISIS. This is unsustainable and likely creating conditions that will help ISIS eventually launch a major comeback in the region.

Some of the problems the Trump administration is now trying to resolve are those the Obama administration helped create. While there is plenty of blame to go around concerning Iraq, the premature U.S. troop withdrawal in 2011 helped give Al Qaeda in Iraq (AQI, now ISIS) the space it needed to regenerate. President Obama also vacillated over Syria, with his caution allowing ISIS to stake out a position of significant power.

In a speech at Stanford this month, Secretary of State Rex Tillerson proclaimed that lessons from Iraq had been learned. Tillerson outlined why a U.S. military presence would still be required in Syria even though ISIS’ “Caliphate” had fallen. “We cannot allow history to repeat itself in Syria,” Tillerson said. “ISIS presently has one foot in the grave, and by maintaining an American military presence in Syria until the full and complete defeat of ISIS is achieved, it will soon have two.”

This is ambitious framing from Tillerson. As he acknowledged, now that ISIS has lost its territory, it will wage an insurgency in Syria and Iraq. The United States can play a vital role in curbing this, but it cannot be omnipotent. The United States has had a military presence in Afghanistan for almost two decades and is yet to have achieved a “full and complete” defeat of Al Qaeda there. The “surge” in Iraq reduced AQI’s capacity, but it could not completely defeat it. Conditions in Syria hardly look more amenable.

Even outside that theatre, ISIS has various affiliates dotted around the globe. Some of them—its affiliate in Libya, for example—seem to have global ambitions and reach; and ISIS remains able to direct or, more commonly, inspire attacks in the West.

Therefore, while the administration’s goal of crushing ISIS is correct, what constitutes victory needs careful consideration. Certainly, the Trump administration could implement policies that begin to address this, but Islamism is an ideology with its own propulsion that the U.S. government has limited ability to impact. The enemy, after all, gets a vote.

President Trump deserves credit for hastening the downfall of their Caliphate. However, the war is not over. The threat has mutated and will continue to mutate. ISIS 2018 will launch an insurgency in its former territory. While the loss of the “Caliphate” damages the ISIS brand, it maintains sufficient cachet to inspire attacks abroad. ISIS also has options for alternative safe havens that could allow it to recover. Even outside physical domains, ISIS has access to electronic spaces where it can continue recruitment efforts.

Therefore, the Trump administration should celebrate the progress they have made but also accept that a huge amount of work lies ahead in the next three (or seven) years. The military, law enforcement and intelligence agencies will be at the forefront of the response. Yet stopping ISIS from presenting itself as a credible government in areas where it still retains a presence is also an important task. In those areas, the United States must help promote responsive and representative governance.

The administration must also frame the problem correctly. The Islamist threat will transcend any one presidency. Victory is not just around the corner. Nevertheless, the Trump administration could lay the groundwork for a strategy that will one day deliver it.

Robin Simcox is The Heritage Foundation’s Margaret Thatcher Fellow, specializing in the analysis of terrorism and national-security issues.