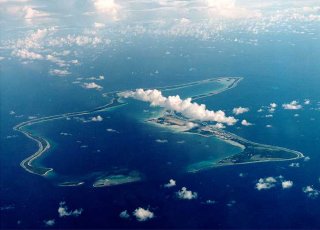 The U.S. Department of Defense is at the horns of a dilemma when it comes to its strategic base at Diego Garcia (DGAR) in the Indian Ocean. Experts in military logistics and in the deployment of U.S. forces will tell you that DGAR is arguably the most important U.S. base because of its relative isolation, incredible infrastructure and its irreplaceable location roughly equidistant from potential military hot spots in the Middle East, South China Sea, Indian Subcontinent, and Eastern Africa. Also, the infrastructure in DGAR is bought and paid for. DOD will not have to prostrate itself with Congress or foreign environmental ministries to get the funds and permits to build a new base and to continue operating. Nor does DOD have to worry about civilian housing projects being built along the fenceline—as is the case with its bases in the United States, Japan and elsewhere.

On June 24, CNA hosted a conference featuring the author, another CNA expert on Indian Ocean matters, and, most importantly, the point person for the Mauritian government who is Mauritius’ Permanent Representative (PERMREP) at the United Nations. At that CNA event, the “presumptive” owners of the DGAR—Mauritius—unequivocally stated that they wanted the United States to stay on the base to anchor their security and they were willing to give the United States a ninety-nine-year lease if that was what was needed. The Mauritian PERMREP also stated that they recognized and supported the growing defense ties between the United States and India and that they were prepared to give the U.S. exclusive access to DGAR and not allow the neighboring islands to be leased to competing militaries such as China. This was welcome news to the author—and many in the audience—who feared that DGAR might go the way of the bidding wars for bases in Djibouti. That country now plays host to a $590 million PLA military base constructed in 2017 within a short drive of Camp Lemonnier that has been occupied by the French Foreign Legion since the 1970s and the U.S. Navy since 2001.

The current DGAR dilemma comes from the fact that the United States remains a lease tenant of the British Indian Ocean Territory (BIOT) and there is a global effort to push the United Kingdom to divest itself of the BIOT and return the small collection of islands (including DGAR) to its former colony—Mauritius. This long-standing dispute has been extensively detailed. The first hint that something was really wrong came in a 2015 Arbitration Decision which held, among other things, that the UK had not lived up to its end of the bargain with Mauritius to grant it political and economic access to the Archipelago; citing a 1965 Lancaster House Agreement which detailed that the UK would relinquish its claims when it longer had a defense need for DGAR and, in the meantime, grant Mauritius economic access to the lands and surrounding waters.

Recent legal and political actions against the UK (and by extension the United States) have gone poorly and the UK is putting up a stiff upper lip in the face of a 13–1 adverse decision by the International Court of Justice that the UK must to cease its illegal occupation of Diego Garcia. This was followed by a 116—6 vote against the UK’s continued occupation by the UN general assembly. There continues to be political pressure within the UK to divest itself from its former colonial holdings and grant some sort of return rights to the Chagos islanders.

After these defeats, the UK issued a statement stating that it was lawfully in legal possession of the Chagos. The U.S. Department of State followed suit and issued a press release stating that the United States views the BIOT as a “purely bilateral dispute” between the UK and Mauritius that should be addressed through negotiations. That statement also reaffirmed the UK’s “continued sovereignty” over the BIOT.

Is Diego Garcia’s Presence in a Nuclear-Free Zone another Problem for the United States?

There is some reporting that the United States is in a treaty bind since it (as a nuclear weapons state) has signed two protocols to the Treaty of Pelindaba, which creates an African Nuclear Weapons Free Zone (ANWFZ). As a Protocol Party, the United States is bound to not take any action that puts a party to the Treaty in default by allowing the “stationing” of nuclear weapons on their territory. Mauritius is a treaty party. The UK is not. In any event, DGAR is clearly within the zone of application of ANWFZ but a map attached to the ANWFZ treaty documents contains a footnote noting that sovereignty of DGAR is in dispute. This footnote arguably allows the United States to take the position that since the UK is not a party to the ANWFZ, it is free to station nuclear weapons on DGAR if permitted by the UK. Conversely, if sovereignty shifted, then Mauritius can’t be compliant with its ANWFZ treaty obligations if it allows the U.S. “stationing” of nuclear weapons on DGAR, Samuel Bashfield wrote in The Interpreter. Bashfield suggests that this changeover in sovereignty would have severe consequences for the DOD.

Without getting into the sensitive issue of whether nuclear weapons are stationed on DGAR, the Mauritian prime minister has publicly said that it was “prepared to enter into a long-term arrangement which would permit unhindered operations . . . of the facility . . . in accordance with international law.” Moreover, the ANWFZ explicitly recognizes in Article 4 that treaty parties may permit the “visits” of ships and aircraft to its ports and airfields (and transits) without running afoul of the prohibition against permitting the “stationing” of nuclear weapons on their territory. For decades, the United States has had to comply with other nuclear-weapons-free zones and other host governments that prohibit the stationing of nuclear weapons on their territory. Given this, the ANWFZ issue appears to mostly be a red-herring and should not stand in the way of a U.S. basing deal with Mauritius.

Do the ICJ and UNGA Actions Pose a Serious Threat to the Status Quo?

The UK and the United States have argued that the ICJ’s opinion was advisory in nature and doesn’t bind the UK or, by extension, the United States. A similar argument exists that the 116–6 vote by the UNGA that the UK needed to cease its administration of DGAR is not binding. It is true that UNGA resolutions are regarded as “recommendatory as a rule” except as regards to organizational matters within the UN sphere.

But, the UK has already paid a price by disregarding the UNGA vote. In November of 2017, the UK lost its ability to reappoint one of its leading jurists to the International Court Justice. Many attribute this to the UK’s actions disregard of prior UNGA resolutions concerning the decolonization of the Chagos. UNGA and the ICJ advisory rulings are binding on the operations of UN and its agencies. To the extent that the UK relies upon UN agencies in matters having to do with deep seabed mining, refugees, world health, mapping and hydrography, etc., the UK has continuing vulnerability when it comes to appointing its citizens to key positions in the UN system and having its voice heard.

The overwhelming majority in the ICJ decision and the UNGA Resolutions must be given strong political weight because, at a bare minimum, it shows that the United States and UK are swimming upstream on a highly charged matter that involves colonial occupation and self-determination. It is also noteworthy that the UK labor government has expressed an unwillingness to maintain the status quo and the UK Supreme Court in 2016 upheld the UK’s colonial detachment on only a razor-thin majority. Lastly, alignment with the UK’s position to resist a decolonization decision is politically troublesome for the United States especially given the Black Lives Matter and Social Justice movements in the United States. The issue won’t go away and the joint U.S. and UK legal/political position will not improve with age. Given that Mauritius has indicated that it is extremely interested in entering into a long-term lease with the United States and possibly the UK to maintain continued operations of the base, it behooves policymakers to listen carefully to what Mauritius is offering.

The Mauritian government has said in multiple venues that it is interested in entering into a long-term lease with the United States and the UK, if necessary, for ninety-nine years and is committed to continued U.S. operation of the base “consistent with international law.” The latter phrase will need to be teased-out in a bilateral or trilateral agreement between the United States, the UK, and Mauritius. At a strategic level, however, the terms of a deal would have to be more than just the annual payments of rent. An agreement would need to create mutual economic and security benefits for Mauritius so that the government (and those who are connected with the base) become the advocates for a continued U.S. (and UK) presence on DGAR. Based on past DOD basing since the end of World War II, the creation of a viable U.S./Mauritius security relationship is a good way to assure that the relationship is long-term and enables Mauritius to give the U.S./UK the types of guarantees needed for a long-term relationship. Some of the other essential terms might include the following: