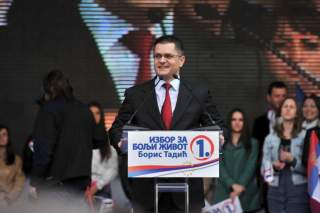 Secretary General Ban Ki-moon’s final time presiding over the conclave of world leaders coming to speak in New York at the United Nations General Assembly is proving to be a disappointing, lackluster conclusion to his term in office.

President Barack Obama delivered a valedictory address that implicitly admitted that his soaring rhetoric about the benefits of a globalized world had not won over hearts and minds—either those of authoritarian leaders who have continued to put roadblocks in the path of his preferred solutions, or of voting publics increasingly inclined to entrust the responsibility for governing to nationalist and populist parties. Russian president Vladimir Putin chose not to show up at all, either to deliver an address to the UN or take the opportunity for a final face-to-face summit with President Obama.

Instead, it fell to Russian foreign minister Sergei Lavrov to deliver the Russian response to and critique of the American position. In essence, Lavrov argued that Western leaders, starting with the American administration, continue to be attached to an unrealistic idealism that clouds the strategic mindset needed for solving current international problems. In assuming that their preferences and perspectives reflected global norms, this “arrogance,” as Lavrov termed it, will preclude the pragmatic compromises needed to end conflicts in the Middle East, Eurasia and the Asia-Pacific—and, by implication, leaves the United Nations itself hamstrung and ineffective.

Obama channeled the idealistic language of a Woodrow Wilson in charting a twenty-first-century vision of a League of Nations. In contrast, Lavrov wants American presidents to come to the UN less to lecture and more to “deal” in the traditions of Princes Talleyrand and Metternich—to use Turtle Bay as the ultimate back room for global power politics.

Sandwiched between Obamian idealism—shared more or less by other Western leaders—and the much more naked realpolitik embraced by the Russians which to some extent guides the foreign policy approach of most of the non-Western states, the United Nations must eke out an unsteady middle path in order to be able to function. The return of ideological divisions within the Security Council, between the globalism embraced by the Western powers and the neo-Westphalian defense of state sovereignty championed by Russia and China, has again begun to paralyze the system.

Into the breach a new UN Secretary General must step, as Ban Ki-moon comes to the end of his tenure. Not only must this person be able to forge effective working relationships with Washington, London and Paris, as well as Moscow and Beijing and other centers of power, but the new Secretary General must be able to restore confidence in the efficacy of the United Nations as the world's principal intergovernmental organization to contain and mitigate global challenges. The UN must show it can wield a toolbox of capabilities in order to justify, to skeptics like Donald Trump and his counterparts in other capitals, the value of continuing to belong to and to financially support the organization.

For the first time in the history of the UN, a candidate for this post has released a comprehensive campaign platform. Vuk Jeremic, the former foreign minister of Serbia and a former president of the UN General Assembly, has issued his call for “Strengthening the United Nations in the 21st Century,” a detailed fifty-three-point program of action.

Jeremic’s proposals offer a way forward for the United Nations to bridge the chasm that the Obama and Lavrov speeches illuminated. A greater refocus of the United Nations as a nonideological, technocratic provider of solutions to discrete problems avoids forcing the UN having to arbitrate between fundamentally different visions of the international political order. Russia, China, the United States and the principal European powers may fundamentally disagree on the big political picture, but they all see the negative impacts of climate change, migration flows, the spread of pandemics, and so on. The dirty little secret in Washington is that while politicians love to bash the United Nations as wasteful, the national-security establishment absolutely depends on the UN to deal with many regional problems that the United States is unable or unwilling to deal with. Jeremic’s proposals to make the UN more deployable in the field and to institute comprehensive fiscal controls would also find a welcome response from those in the State and Defense Departments who want a more capable UN as a “force multiplier” for U.S. theater security policy. Thus, the Wall Street Journal concluded that Jeremic would be the “best chance for reform” at the UN.

I see the core of the Jeremic proposals as an ambitious effort to redefine what collective security means for the twenty-first century, and what the role of the United Nations ought to be as a collective security organization, not as any sort of embryonic world government. Thus, we see substantive foci both on new ways in which the UN and its subsidiary organizations could contribute to combatting terrorism and extremism and on promoting sustainable development. The thinking here is that greater political and economic stability within the UN member states would then create more ground for expanding human rights and settling conflicts.

Is this a vision that the members of the UN Security Council can endorse? Given the new north/west and east/south divides in the world, the next Secretary General must be able to navigate those divisions. Otherwise, the paralysis made most manifest this past week on the rostrum will further erode efforts to pursue global solutions.