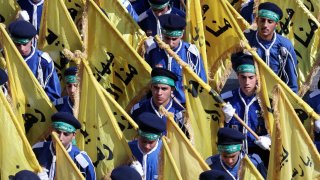 “DO NOT try to do too much with your own hands,” T.E. Lawrence advised in an essay from August 1917. “Better the Arabs do it tolerably than that you do it perfectly.” This is a key tenet of insurgency warfare that the Islamic Republic of Iran has been keen to apply in its relationship with Lebanese Hezbollah—especially as their collaboration has expanded into cyberspace. When it comes to influence strategy, Iranian leaders have long known that, in an era of increasingly vocal nongovernmental players and deregulation of information exchanges, governments can no longer rely solely on their own official communication channels to win the heart and minds of foreign populations. Diffusing ideological content through indigenous networks is likely to have a deeper impact than through national channels. In today’s hypermedia age, working with local friends and allies, with and through local medias, is certainly one of the most crucial and delicate aspects of any credible cyber-influence strategy.

Ever since its establishment in 1982 with Iranian subsidies and with the support of the Islamic Revolutionary Guard Corps (IRGC), Lebanese Hezbollah has been a crucial surrogate for allowing Iran to break its diplomatic isolation and extend its footprint throughout the Middle East “by other means.” The Party of God has acted as a platform of influence through which the Islamic Republic projects its ideological doctrine regionally and prolongs its other-than-war strategy. Engaging with this non-governmental actor, often described as a state within a state, and taping into its networks is a way of filling the gaps between official efforts and effectively reaching out to Lebanese and Middle Eastern youth, consumers, politicians, journalists, businesses, and opinionmakers. By relying on the Lebanese Shia movement to amplify the echo of its message in the proverbial Arab street, it is also a matter of compensating for Iran’s weaknesses in the conventional realms while establishing a virtual border with Israel and challenging Saudi Arabia and Gulf Cooperation Council countries in their strategic depth.

Since the early 1980s, Hezbollah has devotedly reproduced the Iranian modus operandi by combining the classic methods of insurrectional warfare with sophisticated propaganda campaigns to carry out a full-spectrum fight against its American, Israeli, and Saudi adversaries. Blending irregular warfare and high-tech psychological methods, Hezbollah is a pioneer in the art of multifaceted influence strategies enabling the promotion of strategic interests while avoiding head-on combat with militarily superior adversaries: “Inspired and refined with the help of Iran,” notes Ben Schaefer, “Hezbollah is shifting its coercive tactics from urban streets and battlefields to the routers of their Western adversaries.” After initially using it as a simple guerrilla auxiliary, Iran helped it grow into a powerful cyber-proxy capable of magnifying the scope of Iranian ideological power. Over the past decade, this maleficent group has developed into one of the main cyber-protagonists of today’s global arena.

IN THE years following the 1979 revolution, the Iranian regime started relying heavily on its standing as a beacon of the Shia world to galvanize support from pockets of Shia populations in a Sunni-dominated Middle East. With 140 million followers forming an almost uninterrupted string of communities stretching from the Mediterranean to the Ganges Valley, the Shia world constitutes a formidable pool of influence that is all the more strategic for Tehran as three-quarters of the region’s oil reserves are concentrated in areas two-thirds populated by Shia denizens. In the Lebanese context, Tehran’s religious outreach policy has included spreading pro-regime messages through a network of mosques and husseiniyyas (religious meeting locales), as well as through medias linked to the Islamic Republic information agency known as Islamic Republic of Iran Broadcasting. One of the spearheads of Tehran’s audiovisual diplomacy with regard to local Arab-Shia populations is the satellite channel Al-Alam (the Arab World) conveying to its Arabic-speaking and Shia audience favorable views on the Islamic Republic. Launched in 2003 during the U.S. invasion of Iraq and having offices in Teheran, Bagdad, and Beirut, the Iranian TV station prides itself on providing an alternative to other satellite networks run by the Gulf monarchies.

Very quickly, however, those responsible for the Iranian influence strategy came to realize that, to better bridge the famous “last three feet” that stand between Tehran and its target audience, it is essential to relay their message via Hezbollah’s own influence network. Iranian sponsors, therefore, ensured that the substantial aid provided to the Shia militia was not only used to set up an army of several thousand fighters but also served to build a powerful propaganda machine deeply rooted in Lebanese society. Founded in 1991, Al-Manar (The Lighthouse, or The Minaret), the largest and most prominent broadcasting company in Lebanon, rapidly positioned itself at the heart of the influence system co-managed by the Party of God and its Iranian backers. From the get-go, the pro-Iranian TV station plainly displayed its mandate on its website: “Al-Manar is the first Arab organization to stage an effective psychological warfare against the Zionist enemy.” The return on investment has been total for Tehran: Al-Manar acts as a proxy channel for ideological subversion re-broadcasting Iranian messages without its initiatives being directly attributable to the Islamic regime. In other words, a powerful information laundering device.

To support and strengthen this type of subversive partnership, Iran created, in October 2003, the National Passive Defensive Organization (NPDO), an elite cyber-organization in charge of promoting Iran’s interests by systematizing “the use of nonlethal means” including psychological action and the use of mass media conduits. A key cog in the Iranian influence projection program, NPDO has been working closely with the Lebanese Hezbollah to promote “regional resistance doctrine.” It is notably thanks to this form of mechanism that Hezbollah and its satellite channel have succeeded in mastering the art of public diplomacy to galvanize Arab populations against Washington. So much so that, in 2002, several Western observers were already attributing the unprecedented level of anti-American hatred and the failure of U.S. public diplomacy in the Middle East to the virulent anti-Western messages spread through Iran-backed media like Al-Manar.

ISRAEL AND Hezbollah’s thirty-three-day war in the summer of 2006 marked a turning point in the partnership between Hezbollah and Iran by enabling a symbolic victory over Israel and the Israel Defense Forces (IDF)—a victory very largely won on the media front and the cyber battlefield. “How could a few hundred guerrillas force their will on a regional power [like Israel]?” asked Ron Schleifer of Ariel University in the immediate aftermath of the conflict. For him, the standoff between Israel and Hezbollah was a blatant example of asymmetric psychological warfare illustrating the way in which a weaker challenger can level the playfield and seize the initiative at the expense of its conventional opponent. In the Israeli political scientist’s view, the pro-Iranian militia largely prevailed in this “war of images” by focusing on communication techniques and methods of message dissemination, thus securing a key advantage over its powerful adversary despite its initial lack of brute force.

Short of weapons of mass destruction, Hezbollah relied on weapons of mass persuasion to emerge as the virtual winner of the Second Lebanon War. Firstly, the militia benefited from a powerful psychological warfare system overseen by a psywar unit specifically dedicated to the diffusion of doctrinal and symbolic imagery. As the spokesperson for the Israeli army noted at the time, this special unit enjoyed irrefutable expertise in the art of acting on the morale of key segments of local, regional, and international public opinions. However, it is the Shia cable television channel Al-Manar which, by forming the centerpiece of Hezbollah’s psychological action artillery, proved decisive: It was the first channel to announce the kidnapping of the Israeli soldiers on the Lebanese border. Following the “ceasefire,” it was Al-Manar that featured Hassan Nasrallah, the secretary-general of Hezbollah, saying: “we are at the brink of a great victory; a strategic and historic one … a great triumph brought about by Hezbollah fighters and its Iranian allies.” In the space of a month and, to large extent, thanks to Al-Manar’s propaganda machine, Hezbollah metamorphosed from a simple armed Islamist group to the leading mouthpiece of the Lebanese resistance against “Zionist imperialism.”

In addition to yielding an indirect victory over the IDF, the Second Lebanon War provided Iran’s IRGC with a testing ground to experiment with the so-called Mosaic Asymmetrical Warfare doctrine adopted in 2005. To a large extent, it is by applying the Iranian ally’s recommendations that the Party of God managed to symbolically win over the Israeli forces. It is no coincidence that only a few weeks after the end of the conflict, Brigadier General Mohammad-Ali Jafari, commander of the IRGC, pointed out that: “As the likely enemy is far more advanced technologically than we are, we have been using what is called ‘asymmetric warfare’ methods … We have gone through the necessary exercises and our forces are now well prepared for this.” In many regards, the 2006 war proved a pivotal moment: it is at this point that specialists such as F.G. Hoffman date the emergence of what they coined “hybrid conflicts”—ones involving coordinated use of military and non-military means to achieve gains in the psychological dimensions of conflicts.