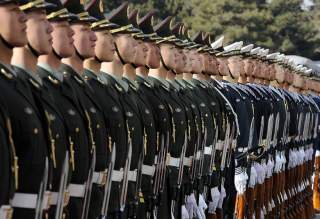 China’s new defense white paper, issued amid growing concern about Beijing’s activities in the South China Sea, made headlines for its emphasis on projecting naval power well beyond its coastal waters. That’s for good reason—China’s expansive claims, rising assertiveness, and land reclamation have together prompted worries in the region and beyond. Yet the final chapter of the white paper, which addresses Beijing’s efforts to deepen its security cooperation, has attracted decidedly less attention. That’s unfortunate, because in its efforts to boost foreign military ties, China reveals both its ambitions and its constraints.

The policy document outlines the armed forces’ goal to deepen military-to-military relations with countries in every part of the world, on a “non-aligned, non-confrontational” basis that is not directed at any third party. It highlights the importance of ties with two countries in particular: Russia, with which Beijing hopes to enhance exchanges and cooperation, and the United States, with which it seeks an undefined “new model of military relationship.” The People’s Liberation Army hopes to extend its exercises and training with foreign partners from a focus on nontraditional security areas (such as humanitarian assistance and disaster relief) to a focus on more traditional ones.

These are not merely aspirations. As my colleagues at the Center for a New American Security have documented, consonant with Beijing’s rising sense of global interests and the means to pursue them, it has over the past decade deepened its security partnerships across the board. The PLA has conducted exchanges with militaries in more than 150 countries and trained thousands of foreign personnel. Having never engaged a joint exercise before 2002, it has since conducted exercises with more than twenty countries, ranging from Russia and Pakistan to American allies and the United States itself. Last year, China participated in RIMPAC, the world’s largest multinational naval exercise, and will likely do so again next year. Its foreign arms sales have more than doubled over the past decade, and China is now the world’s third-largest arms exporter.

But dialogues and military exchanges are one thing; overseas bases, intelligence-sharing agreements and mutual defense pacts are quite another. The sharp contrast with the United States is instructive. Despite the legitimate concern about America’s decreasing defense budgets and China’s increasing ones, an accurate measure of the ability to project power would include the role of close partners as well.

The United States has dozens of allies, including many in collective security arrangements, and has enjoyed decades of close political and military ties with them. China has just one treaty ally, North Korea, and even there it remains in doubt whether Beijing and Pyongyang are actually bound to defend each other. The United States has hundreds of overseas bases and facilities in more than forty countries around the world; China still aspires to establish its first base outside its borders. And the United States accounts for more than a quarter of all global arms sales.

Then there is the natural constraint that China’s rising assertiveness will place on its ability to forge meaningful security partnerships. That assertiveness is driving Asian militaries into the arms of each other and of the United States to a far greater degree than it is spurring interest in collaboration with the PLA. The establishment of an air defense identification zone in the East China Sea, placement of an oil rig in Vietnamese waters, disputes with the Philippines over shoals, and construction in the South China Sea that could allow Beijing to project power thousands of miles from its shores have spurred greater interest in deepening security ties that do not include China.

Working with Beijing will continue to interest a variety of countries. Some will enjoy the strings-free military aid that attends closer cooperation with the PLA, while others, including the United States, will use military exchanges and exercises to learn more about Chinese intentions and operations, and to build relationships that could be useful in a crisis. But uneasiness about Beijing’s current activities and suspicions about its future intentions will make it hard for China to succeed in achieving a comprehensive or nonconfrontational array of security partnerships.

All of this presents an opportunity for the United States and its own partners. While Washington has for decades sought to shape China’s choices as its power expands, the success of this effort remains in doubt. What the United States can more easily do is bolster the web of security ties across the Indo-Pacific, ensuring that China rises into a region where the other powers are strong and interlinked.

This is and should be a central task of American security policy in Asia. Since World War II, the United States has demonstrated enormous capacity and skill in marshaling collective international efforts to encourage the emergence of an open and rules-based international system. Asia—and China—have benefited more than most. Now is the time to build on past successes.