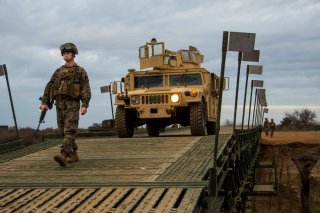 The ugly truth is United States Marines no longer have the full “toolbox” of capabilities needed to conduct combined arms operations in the traditional sense. Aside from the ill-advised divestments in infantry, tanks, cannon artillery, assault amphibious vehicles, and aviation, the Marine Corps has jettisoned all its bridging and assault breaching capabilities. All the divestments were made to self-fund future, experimental capabilities. No reductions were mandated nor even suggested by the Department of Defense. None of the needed equipment tossed aside was directed by the Congress or others. These crippling cuts were forced upon a robust, healthy, highly adaptable Marine Corps by a narrow, dubious concept that envisioned fighting a known enemy, China’s People’s Liberation Army Navy (PLAN) in a specific location, the South China Sea region. Senior Marine leaders codified this approach in their capstone planning document Force Design 2030 (March 2020).

Force Design 2030 is a significantly flawed document that has seriously eroded the capabilities of Marines to respond quickly and effectively to any threat, anywhere. Many of the most serious flaws are pointed out in the recent article, “Our Concerns with Force Design 2030,” authored by two retired 4-star Marine Corps generals. Simply stated, Force Design 2030 poses a significant risk to national security.

The Marine Corps’ myopic fixation on the Chinese PLAN at the expense of more likely global threats is misguided and dangerous. The loss of combat capabilities needed to fight and win today and tomorrow has been repeatedly articulated by many former and retired Marines in over seventy articles, published in the local and national media during the past eight months. An area not yet fully explored is the adverse impacts of the Marine Corps’ decision to divest all bridging and assault breaching capabilities from its inventory. Bridging and breaching are not just combat multipliers. They are often the keys to winning or losing battles today and in the future.

The Combat Engineer Battalion is principally focused on facilitating mobility or movement for the division, primarily the infantry. The battalion was previously manned and equipped to rapidly and effectively breach almost any obstacle, especially while under fire, and for supporting Marine infantry in a wide range of other areas, such as demolitions. Three years ago, combat engineers had armored vehicles, which can clear obstacles quicker and are much more survivable under fire than a man alone. Despite lessons learned from previous conflicts, especially from Operation Desert Storm and Operation Iraqi Freedom during which Marine Corps bridging and breaching capabilities were invaluable and saved lives, the Marine Corps has shed the personnel and equipment needed to maintain the momentum of future attacks. Combat engineers have been stripped of their organic Assault Breaching Vehicles (ABVs), which were tanks with plows and line charges for rapidly clearing obstacles and minefields. To make matters worse, the blade tanks in the tank battalions have also been lost.

The only truly available piece of equipment left in the Marine Corps inventory to breach a minefield is the entrenching tool, which is carried on the back of every marine. Sadly, almost criminally, Marines now sent to clear minefields or other obstacles will be more exposed than ever. Tanks are no longer available to provide overwatch. The loss of 67 percent of cannon artillery in the active force essentially precludes the use of artillery-delivered colored smoke and white phosphorus to obscure exposed Marines. Artillery-delivered FASCAM (Family of Scatterable Mines) will also be unavailable for covering breach operations and plugging enemy penetrations.

The Engineer Support Battalion was the only unit in the Marine Corps capable of rapidly laying down bridges to cross a stream or other obstacle. The requirement for bridging is universal, going back thousands of years to the Roman armies. A Marine Corps capable of global operations across the spectrum of conflict, as envisioned in the recently published Vision 2035 (an alternative to Force Design 2030 by former Marine Corps Commandant General Charles Krulak and former Commander of U.S. Central Command General Anthony Zinni), requires a robust bridging capability. The Marine Corps divested its only bridging capability, the highly reliable and effective “AVLB” (Armored Vehicle Launched Bridge) to help self-fund anti-ship missiles. Today, the Marine Corps has no organic bridging capabilities. I recently spoke to an instructor at the Marine Corps Engineer School, and he lamented that Marine Corps engineers are now being taught to cut trees and build log bridges, techniques used by the ancient Roman Legions and totally useless in locations without trees.

Marines will die in frustrating helplessness waiting on bridging and breaching support that is not available. Marine Corps Combat Engineer Battalions can no longer be called forward to breach an obstacle. The Bridge Companies have been ditched (if you forgive the pun) from the Engineer Support Battalions, leaving these battalions as basically providers of bulk fuel. Engineers that were once trained and equipped to support Marine infantry in “every clime and place” are now little more than providers of logistical supplies. The experience and expertise to emplace Ribbon Bridging (for floating across rivers), Medium Girder Bridging (for dry or smaller wet gaps), Mabey Johnson Bridging (that modern Bailey equivalent we got from the Brits in 2003 for our assault on Baghdad), and AVLBs that disappeared with our tank battalions, are gone. And not due to enemy fire but to the dangerous strategy of “divest to invest.”

In March 2003, I was proud and confident as I delivered new Israeli D-9 Armored Bulldozers to our front lines in Kuwait as we staged “like greyhounds in the slips” to cross the Line of Departure into Saddam’s Iraq. We had these and fifty-four other I MEF Bulldozers trim for the fight. We had all our Bridging behind us staged to move in layers where we needed it, on call, with 5,000 wonderful U.S. Navy Seabees to assist with the “just arrived in time” Mabey Johnson Bridging. The British 1st UK Armoured Division was on our right, and the United States Army was fully arrayed on our left. Ancient Mesopotamia lay before the Marines, and we were ready! Our Combat Engineers and Engineer Support Battalions knew that we had four major water obstacles to cross: the Euphrates River, the Saddam Canal, the Tigris River, and the Diyala River at the eastern gates of Baghdad.

We crossed the obstacles with grit and determination. For 500 miles, Marine engineers facilitated the movement of the I Marine Expeditionary Force from the Kuwait border to Baghdad. We were blessed to have superb forces on our flanks and the great air support above us. Mobility was key and we succeeded. The enemy failed in their counter-mobility mission. But it was a close thing at times (all the Diyala River bridges were blown).

The Marines would not succeed on this or any similar battlefield today. The assault breaching and bridging needed are gone. The experience and expertise to quickly and effectively employ non-organic bridging and breaching assets are also gone. When the infantry calls out “Engineers Up,” no one will be there to respond.