Do Any of Candidate Trump's Foreign-Policy Promises Still Stand? 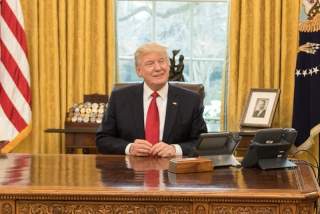 Now he tells us.

President Donald Trump admits that he said NATO was obsolete because, well, he didn’t know anything about the transatlantic alliance. So apparently his campaign comments now are inoperative. If he had to do it all over again, he’d probably sound a lot like, well, Hillary Clinton.

When he was asked about the issue on CNN, he admitted, he deemed the organization obsolete “not knowing much about NATO, now I know a lot about NATO.” He argued that his ignorance was understandable “because I wasn’t in government. People don’t go around asking about NATO if I’m building a building in Manhattan, right?”

Right, but then, you don’t build a building in Manhattan if you don’t know anything about building a building. You learn about the process before you start. For the same reason, if you run for president, you expect to be asked about NATO, so you learn something about NATO. That’s what campaign advisers are for. That’s why candidates invite experts in for briefings. Except, apparently, candidate Trump.

But now he just loves the alliance. It turns out it isn’t “obsolete,” even though the United States continues to defend a group of countries with a larger economy and population than America, and vastly greater resources than Russia, Europe’s only conceivable adversary. So much for challenging the status quo. President Trump has become the status quo.

Not that this is the only issue on which the president was, shall we say, unprepared. During the campaign, he claimed that China controlled North Korea. If only President Xi Jinping raised his pinky finger, candidate Trump seemed to suggest, then North Korea would dance as instructed.

Trump was not the only official so misinformed. Sen. John McCain, whose first reaction to any foreign problem is to send in the bombers, made much the same claim. Indeed, he admitted to being puzzled that the Chinese didn’t rush to do Washington’s bidding. Apparently it never occurred to him that Beijing might have its own set of interests.

But anyone familiar with the issue knew that Beijing’s clout was limited. And now the president does—thanks to his Chinese counterpart. President Trump explained: the Chinese leader, for whom he has “great respect,” convinced him that “it’s not so easy.” Better late than never. However, it would have been better if someone on the campaign had mentioned the issue to the candidate. Or someone, somewhere in the federal government had briefed the president before the summit.

The president appeared to be similarly ignorant about Syria, apparently not realizing that people die, often in terrible ways, in civil wars. Indeed, some four hundred thousand people on all sides, including noncombatants, are thought to have perished since 2011. This apparently escaped the attention of the candidate and his advisers, experts and briefers, if any existed. Nor, it seems, had anyone in the federal government gotten him up to speed as president. Only when he saw the “horrible” photos of those who died in a chemical attack—a few score compared to the hundreds of thousands killed so far—was he moved to do something. Not that the solitary strike will save lives, reduce human hardship or, above all, make America more secure.

Nor is it reassuring that the U.S. president had to rely on the Chinese president to get his facts about Chinese policy. Imagine President Trump meeting Egypt’s Abdel Fattah el-Sisi: “There are no political prisoners in Egypt. Everyone is free to speak their mind. The people love me,” says the Egyptian. Or the president welcoming the Saudi king: “We fully respect the freedom of Christians to worship and believe in equality for women. We also would not think of hurting civilians in Yemen,” explains the royal.

A summit is planned with Turkey’s Erdogan: “We have the freest media on earth. The referendum vote was the freest on earth. All the people love me. Only terrorists oppose me,” announces the sultan wannabe. Meetings with Russia’s Putin, Afghanistan’s Ghani, and Iraq’s al-Abadi also would have equally interesting results. Even better, what if Trump visited Cuba, huddled with the Iranian mullahs, or held a summit with North Korea’s Kim? The tales they all would tell him!

Finally, the fact that candidate Trump admits he issued campaign proclamations without knowing anything about the relevant issue leads to the obvious question: does he stand behind any of his campaign promises? If Germany’s Merkel tells him that her country cannot spend any more than the current 1.22 percent of its GDP on the military, will he abandon the issue of burden sharing? If the incoming (as not yet elected) South Korean president insists that his nation has social needs to meet, will President Trump drop his complaint that America isn’t getting much for its money from defending the South, which is vastly wealthier and stronger than the North?

Does even President Trump’s criticism of nation building stand? After all, he presumably knows no more about Iraqi reconstruction and Muammar el-Qaddafi’s downfall than he knew about NATO’s policy toward terrorism and China’s influence over North Korea. If, say, the ousted president of Yemen were to explain to President Trump that America should undertake an extended occupation of his nation to restore his rule, rebuild the country’s infrastructure and turn Yemen into a global tourist attraction, would President Trump enthusiastically rely on his newfound knowledge and sign on, promising to make the mission the best nation-building effort ever?

That candidate Trump didn’t know the details about complicated issues surprised no one. And it really didn’t matter. One need not know which radical Islamist faction was in the ascendency among Syrian insurgents to recognize that Americans have no place in that conflict. Whether NATO addressed terrorism was irrelevant to the question of why, after seventy years, the United States continued to subsidize European nations that perceived few security threats and weren’t willing to spend seriously, even if they claimed dangers existed.

Trump posed as the common-sense candidate. But now he has revealed himself as just an ignorant advocate of the conventional wisdom. And one who looks to China’s president for advice. That’s probably not what most of his supporters expected.

Doug Bandow is a senior fellow at the Cato Institute and former special assistant to President Ronald Reagan. He is the author of Foreign Follies: America’s New Global Empire.