Do Joe Biden and Kamala Harris Disagree on Gun Control? 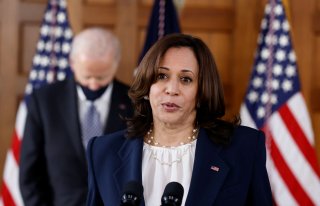 During the Democratic presidential primaries, then-candidate Kamala Harris campaigned largely on gun control reform—as she was heavily exposed to gun violence during her time as a prosecutor—and asserted that if Congress didn’t act swiftly on reform, as president, she would.

When she was running for president, Harris pledged to unilaterally enact extensive gun control bills if lawmakers on Capitol Hill didn’t act within her first 100 days in office. Some of her priorities covered on the campaign train were to ban the importation of all AR-15 style assault weapons, mandate “near-universal background checks” and take away a gun dealer’s license and hold criminal liabilities on them if they broke the law, according to CNN.

With just over a month until President Joe Biden marks his one hundred days in office, it’s unlikely that he will take a similar stance in passing gun control bills by executive orders.

Instead, Biden pushed the Senate this week to stand behind two House-passed bills on background checks and an assault weapons ban following the two recent shootings. He did not say that he would sign the bills into law by using his presidential powers.

This is largely different from Harris’s rhetoric during the 2020 presidential race, beliefs that Biden disagreed with when the two were competing for the nomination.

When Biden was a presidential candidate, he emphasized that there was no “constitutional authority” to nix assault weapons by executive orders. His remarks surfaced during a 2019 debate, where Harris was asked about his points regarding presidential powers and gun reform, in which Biden interrupted, “Some things you can, many things you can’t.”

But it’s important to note that it’s unlikely that Harris and Biden would publicly disagree with one another, as the duo has carved a strong relationship ever since the president declared her as his running mate.

It’s unclear, however, how Harris will navigate conversations relating to gun control, as the issue served as the centerpiece on her own presidential campaign, while it hasn’t been addressed under the Biden administration.

“It is time for Congress to act and stop with the false choices. This is not about getting rid of the Second Amendment. It's simply about saying we need reasonable gun safety laws,” Harris told CBS News, adding that Biden hasn’t crossed off exercising his executive authority to pass bills relating to gun reform.

But experts say that it is fairly common for a president and vice president to have different positions.

“It doesn't matter what positions a vice president held prior to becoming VP; she or he is subordinate to the president. A VP can pick a fight with the president, but this is a sure way to end up on a months long tour of diplomatic outposts no one has ever heard of,” Jonathan Krasno, a political science professor at Binghamton University, said.

Marjorie Hershey, a professor emerita of political science at Indiana University-Bloomington, noted that “the traditional practice of nominating a vice-presidential candidate who would ‘balance the ticket’ made it very likely that disagreements would exist.”

Goldstein also said, “A vice president's advising role always includes giving the president [advice] that the president may not agree with and may not accept.” He went on to add that “one of the reasons many were critical of Vice President [Mike] Pence was the perception that he was too obsequious and unwilling to give such advice, perhaps because he did not believe President [Donald] Trump welcomed such advice.”

“Breaking with the boss isn't a great move, especially when the boss is pretty popular and has the ability to freeze you out of other important initiatives,” Krasno said. “Or when you hope to succeed him as president. No one has more vested interest in Biden's success than does Kamala Harris.”

Ultimately, Harris can offer Biden input on his agenda, as he vowed that his political partner will be the “last voice in the room” before big decisions, but the final move will be made by the president.

Biden hopes that the Senate will move on gun control reform, a matter that will likely be on the chamber’s chopping block since Sen. Joe Manchin (D-W.Va.) said Tuesday that he does not support the two House bills that were passed last week. With razor-thin margins in a 50–50 divided Senate, Democrats do not have enough votes to make them become law.