Do Merkel and Germany Have a Future? 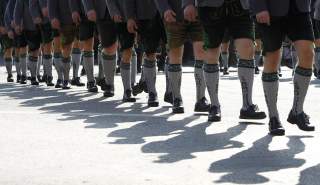 Germany has a new grand-coalition government (GROKO) in sight thanks to the decision by Social Democratic Party (SPD) rank and file to agree to another link-up with Chancellor Angela Merkel’s Christian Democrats (CDU/CSU). SPD dues-paying members voted by two-thirds in a postal referendum to play second fiddle once again under Merkel at the national level. Both parties are motivated by palpable fear that failure to agree would provoke new elections in which they could both lose even more votes to the right-wing Alternative for Germany (AfD) than they did in the shocking general election last September.

Thus, the underlying purpose of GROKO is not to achieve policy goals, but to give time for the AfD to lose political momentum and for frustrated German voters to return to the traditional parties of the center-right and center-left. The CDU/CSU and SPD (plus the Free Democrats and Greens) hope the thirteen percent vote won by the AfD last fall was its crest and with time it will lose both legitimacy and voter appeal. Is this likely?

To be sure, the AfD has huge problems, in part the consequence of its very rapid rise from marginal status to hold ninety-four seats in the national legislature, the Bundestag. It also holds seats in all but two of Germany’s sixteen states (and will likely pick up the others soon). This has been an extraordinary growth spurt unparalleled in postwar Germany. Like adolescent growth spurts, the process has not been very mature. Internal tensions have already nearly torn the AfD apart at the leadership level. A party only four years old now fills hundreds of legislative seats at national and state levels without the structure and discipline of a normal German political party. Disputes over doctrine, policy and personalities (i.e. power) erupt into the open regularly, while public decorum appears almost anathema. Merkel and her associates on both right and left hope the AfD will prove unable to make the transition from the streets to parliamentary chambers and will fatally discredit itself through mindless opposition and posturing.

The AfD also enjoys real popular momentum. It began life as an intellectual reaction against Merkel’s financial policies within Europe, but soon became a nationalist vehicle for anti-Islamist and anti-migrant passions fueled by her decision to admit very large numbers of migrants from the Middle East and beyond. The steady growth of the party—first in state elections and then at the national level—reflected a real element of xenophobia but also the fact that prosperous Germany does have seriously disadvantaged regions and social groups. Recent statistics show that the official poverty rate among unemployed Germans is the highest in the EU, while German television viewers routinely see elderly and unemployed citizens fed by soup kitchens while migrants receive priority for housing, training and other benefits. This is a toxic mix not likely to disappear soon, above all in the perceptions of AfD supporters.

In the Bundestag, the AfD has pledged to oppose the establishment pretty much across the board, arguing that the previous Grand Coalition government had a political free ride to pursue policies much of the populace did not want, including on migrants and EU financial commitments plus other controversial areas such as same-sex marriage. The coalition agreement for the GROKO provides the AfD ample targets for its provocative style of opposition in the new Bundestag, till recently a scene of almost soporific good manners. If nothing else, German political television will be more entertaining in the months ahead.

Both the CDU (with its Bavarian sister party, the CSU) and the SPD are engaged in personnel changes at the top in reaction to their September election debacles as well as to public disgust at the six months lost to the tortuous process of government formation. The CDU and SPD have new party general-secretaries, both energetic women from relatively small states near the French border, who will stay out of government and focus on rebuilding their respective party structures with emphasis on promoting younger talent into their somewhat moribund senior ranks.

The SPD has kissed goodbye to its champion of only a year ago, Martin Schulz, who proved unable either to lead his party effectively into a general election or to solidify its ranks. (He did, however, negotiate a strikingly good coalition deal with Merkel, giving the SPD both the foreign ministry and the key finance ministry—to the outrage of many in the CDU.) The new finance minister will be Olaf Scholz, the tough-minded former mayor of Hamburg. Along with the straight-talking new party general-secretary, Andrea Nahles, the SPD has a leadership determined to recover some of their party’s traditional appeal to blue-collar workers through a more no-nonsense approach to coalition governing. They also face a severe generational split within the party, as its youth wing campaigned strongly against the GROKO.

The CDU is entering Angela Merkel’s final term as chancellor. Indeed, many German commentators question if she will be able to complete a full four-year term, if only because the SPD is motivated less by common purpose with the CDU than by electoral fear of the AfD. If AfD appeal deteriorates, the SPD will look to provoke early elections.

With this in mind, Merkel at long last is starting to prepare for her own succession. During her previous three terms in office she pursued a policy of “cutting down the tall trees” in her own party (something she had learned from Helmut Kohl). Now, the CDU needs new talent in Berlin and an opening to “youth,” which Merkel defines as under sixty. The new party general-secretary, Annegret Kramp-Karrenbauer, is often called the “mini-Merkel” in demeanor and appearance plus political smarts. Somewhat surprisingly, Merkel has also promoted Jens Spahn, one of her most prominent critics within the party, to be health minister. Spahn is an openly gay politician who took advantage of the same-sex marriage law last year, and is an unvarnished critic of the growth of Islam in Germany, which he accuses of increasing anti-semitic, homophobic, misogynist and criminal tendencies. He clearly is a man to challenge the AfD on some of its own ground. Merkel has other arrows in her succession quiver, including her closest associate and Interior Minister Thomas de Maiziere and Defense Minister Ursula von der Leyen.

A notable feature of the reshuffles in both CDU and SPD (and Free Democrats) is that they are pretty much limited to politicians from western Germany. New political faces from eastern Germany (the former German Democratic Republic) mostly belong to the AfD and to the neo-Marxist Left party. The alienation factor in German politics is most prominent in the east; indeed, without it neither the AfD nor the Left would have serious national stature. It was recently reported that the Berlin Wall has now been down for longer than it was up, but the so-called “Wall in the head” is still very much standing. The political culture of the east often has more in common with neighboring Poland and Hungary than with western Germany.

With the formation of the new German government scheduled for March 14, the post–Merkel transition in Germany will begin with contestants for future national leadership in all parties off and running. Place your bets.

E. Wayne Merry is senior fellow for Europe and Eurasia at the American Foreign Policy Council.

Image: People in traditional costumes cast shadows as they march during the Oktoberfest parade in Munich September 19, 2010. Millions of beer drinkers from around the world will come to the Bavarian capital over the next two weeks for the world's biggest and most famous beer festival, the Oktoberfest, which celebrates its 200th anniversary this year. REUTERS/Michaela Rehle