Do South Koreans Really Want U.S. Tactical Nukes Back on the Korean Peninsula? 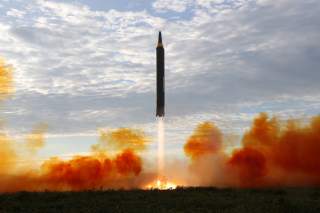 North Korea increasingly poses a grave threat to its southern neighbor and the world by conducting a series of nuclear and missile tests. Amid this escalating tension on and around the Korean Peninsula, South Koreans have started voicing their concerns about a nuclear-armed North Korea.

A Korea Society Opinion Institute (KSOI) poll conducted September 8–9 shows that 68.2 percent of those surveyed believe that U.S. tactical nuclear weapons, which were withdrawn in 1991, should be redeployed to South Korea to protect the country from Pyongyang’s growing nuclear threat. A Gallup poll conducted September 5–7 also found that 60 percent of the respondents said that South Korea should arm itself with nuclear weapons. Extrapolating from the polls, some people could believe that an absolute majority of the South Koreans favors nuclear rearmament in response to a nuclear-armed North Korea.

Indeed, backed by the results of these latest polls, the right-wing Liberty Korea Party (LKP)—the main opposition party in South Korea—is further stepping up its demands for the redeployment of tactical nukes, not only to the South Korean government but also to the Trump administration. Having already adopted bringing back U.S. tactical nuclear weapons to South Korea as its party platform last month, the LKP argues that a “nuclear balance” is the best way to guarantee South Korea’s security in this dire situation. The LKP’s push for nuclear rearmament is in stark contrast with President Moon Jae-in’s policy of upholding a long-lasting principle of denuclearization of the Korean Peninsula, which he reconfirmed during his latest interview with CNN.

Amid a heated domestic debate over the redeployment of U.S. tactical nukes to South Korea, a delegation of lawmakers from the LKP visited Washington last week to lobby for bringing back U.S. nukes to their territory. The delegation likely touted the Korean public’s growing support for going nuclear.

But, how accurately does this type of public poll represent the opinion of ordinary South Koreans? Do they really want nuclear weapons back on their soil?

This is not the first time the South Koreans have expressed a great enthusiasm for having nuclear weapons. Leaving aside South Korea’s own nuclear-weapons program in the 1970s under President Park Chung-hee, a majority of the respondents in public polls in recent years were willing to accept any type of nuclear weapons—either offered by the United States or indigenously developed—whenever North Korea tested a nuclear device. In most cases, however, the media attributes the poll results to the percentage in favor or against such issues as South Korea’s own nuclear armament or the redeployment of U.S. tactical nukes. Thus, without looking into the details of questions and methods of the polls, there is a risk that media reports could lead to a hasty generalization of public opinion on this significant issue.

For instance, in the KSOI’s poll of last week, the question was quite simple, with three possible choices: with regard to a recent controversy over U.S. tactical nukes redeployment, which opinion do you sympathize with? First, tactical nukes should be redeployed for national defense against North Korea’s nuclear threat (68.2 percent). Second, I oppose the redeployment of U.S. nukes because it will aggravate the relationship between the North and the South (25.4 percent). And last, I don’t know or have no opinion (6.4 percent). This question with simplified answer choices ended up generating a majority of pro-nuclear South Koreans, but it is a limited, and even misleading question that does not reflect the complexity of nuclear reality on the Korean Peninsula.

Most importantly, the first and second choices provided with the question reflect some degree of bias of the pollster. By mentioning “national defense” in the first choice, it is assumed that the redeployment of tactical nukes would enhance South Korea’s defense capacity against a nuclear North. Further, this poll did not reflect the counterargument that the redeployment of nukes would possibly not contribute to improving South Korea’s security. Moreover, the wording of the second choice further limits the reasons for opposing the redeployment only into the North-South relationship. Undoubtedly, there is more than one reason why bringing back U.S. tactical nukes to South Korea would not be in the latter’s interest. One of the other reasons is a possible nuclear domino in Northeast Asia facilitated by South Korea’s forsaking of its current principle of denuclearization on the peninsula even though the tactical nukes would stay in possession of U.S. Forces Korea (USFK).

South Korea’s presidential office (the Blue House), officially against the redeployment of U.S. nukes to Korea thus far, expressed its concerns on some of the negative consequences of the redeployment, including the spread of nuclear weapons in the region. In his CNN interview, President Moon clearly dismissed the possibility of reintroducing U.S. nukes to his country as well and disagreed with the idea that “South Korea needs to develop [its] own nuclear weapons or relocate tactical nuclear weapons in the face of North Korea’s nuclear threat.” He also warned that this move could “lead to a nuclear arms race in Northeast Asia.” Neither the Blue House or President Moon pointed out at a specific country, but some South Koreans might find a nuclear-armed Japan as dangerous as a nuclear-armed North Korea considering Korea’s unresolved historical issues with Japan. In this sense, it would be interesting to see whether—and how much—a poll result would be different if the possibility of Japan’s armament, including with nuclear weapons, were mentioned in a question.

Another issue is how much the general public in South Korea is familiar with normative and technical aspects of this issue when questioned in a poll. Some might have heard President Roh Tae-woo’s declaration on the denuclearization of the Korean Peninsula in 1991, but might not be fully aware that South Korea promised not to produce, possess, store, deploy or use nuclear weapons. There would be also fewer Koreans who can distinguish tactical nuclear weapons from the strategic ones that North Korea claims to possess. Furthermore, a number of ordinary Koreans would find it difficult to understand what “nuclear deterrence”—a term often featured in the media but not thoroughly explained—means and how it works. Indeed, the public cannot be knowledgeable on every current issue asked in a poll. Yet compared to other social and economic issues encountered in daily life, such a security problem as having nuclear weapons or not would be the least familiar issue to the general public. Thus, simplified public opinion on unfamiliar issues has certainly limits unless a process of extensive discussion and deliberation is preceded nationwide.

Last but not least, even if some people believe U.S. tactical nuclear weapons should be redeployed to South Korea for ensuring the country’s security, fewer people would support that option if their neighborhood was selected as a deployment site. The protests in the rural town of Seongju, which is where the Terminal High Altitude Area Defense (THAAD) system has been installed is a good example of how local residents can turn into fierce opponents of a military decision. Another example is South Korea’s growing anti-nuclear energy movement, particularly in the areas where nuclear-power plants are located or planned to be built. Some residents in those areas have been increasingly concerned about their safety and cooperating with religious and environmental groups in anti-nuclear-energy protests. If tactical nuclear weapons are deployed to a U.S. Forces Korea base, not only would local residents near the base likely follow the path of the anti-nuclear-energy movement, but also the protests might be much more intense because if North Korea decides to start a war, then their towns could be one of the first military targets.

It is hard to disregard the fact that there are some pro-nuclear-weapons sentiments in South Korea amid growing nuclear threats from the North. However, we should not equally disregard another fact that public opinion on complicated security issues can be easily misguided by biased or insufficient information. Furthermore, public opinion can be dramatically shifted with a change in external environment. In a democracy, listening to public opinion is an important step for a government or politicians to deliberate on policy options. However, simplified public opinion via a poll should not be used as an excuse for making or supporting an important decision on national security that could determine a country’s destiny.

Se Young Jang, Ph.D. in international history, is a nonresident scholar at the Nuclear Policy Program of the Carnegie Endowment for International Peace.