Do Trump's Enemies Finally Have Their Smoking Gun? 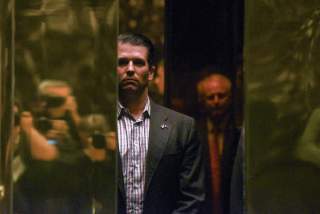 President Trump’s enemies think they have found the smoking gun—or at least some telltale powder residue. The New York Times reports that not only did Donald Trump Jr. meet with “a Russian lawyer who has connections to the Kremlin” during last year’s campaign, but that Trump fils knew that the meeting was part of a Russian effort to help his father’s campaign by supplying dirt on Hillary Clinton. This contradicts Trump Jr.’s account of the meeting, which he said was about international adoptions and the Magnitsky Act. Vox News and other liberal outlets have readily speculated that Trump Jr. may have committed a federal crime by seeking to obtain an in-kind campaign contribution—information—from a foreign source.

Trump Jr. insists he learned nothing about Clinton from the meeting, which did in fact focus mostly on adoptions. The Magnitsky sanctions against Russian officials certainly have been an acute irritation to Moscow; it takes no feat of imagination to conceive of a go-between for the Kremlin making Magnitsky matters a prime topic of discussion. So can anyone prove that there’s more to the story? By itself, the meeting is not much more incriminating than Trump père’s explicit calls during the campaign for Russia to release Clinton’s private-server emails. (“Russia, if you’re listening, I hope you’ll be able to find the 30,000 emails that are missing,” candidate Trump said last July 27. “I think you’ll probably be rewarded mightily by our press.”)

As grounds for criminal prosecution, the meeting seems like a dud based on what is known to date. Is the possibility of receiving information from a foreign source really equivalent to taking bribes from another country? Laws can be stretched, but only so far—no matter how creative the prosecutor.

Yet the latest twist to the Russia affair does foretell legal trouble for the president and the president’s men. If Donald Trump Jr. did not commit a crime here—and he probably didn’t—chances are that someone close to the president broke some federal law at some point. There are enough laws on the books to ensnare even the innocent and cautious. Whatever else it was, the Trump campaign was not cautious. If someone as close to the candidate as his son and namesake would take a meeting with a foreigner that anyone could have guessed was a Russian agent, just what kind of quicksands did the campaign take the trouble to avoid? Rigid observance of propriety was not the style in Trump world, to say the least. So Mike Flynn didn’t register as a foreign agent until after he was taking Turkish money. And Donald Trump Jr. let himself be lobbied by a Russian cat’s-paw. Somewhere along the line, some campaign official’s carelessness will have crossed the line into illegality. Even assuming the liberals’ great white whale, proof of collusion, never surfaces, investigators will be able to tie minor lawbreaking to major implications of wrongdoing: an otherwise shadowy case will be given substance by a few documented instances of foolhardiness (if not something worse).

Republicans had better brace for the day the “Mueller Report” comes. The Starr Report on President Clinton’s misbehavior did not bring to light any of the more serious crimes for which Republicans had hoped to find evidence. It didn’t matter: even as a compilation of old news spiced by relatively minor (if salacious) new details, the Starr Report inflicted serious embarrassment on the Clinton administration and gave the Republican Congress a justification for impeachment. Clinton was saved by his personal popularity, a booming economy and the GOP’s ineptitude. Trump has presided over a strong economy so far, but otherwise he has yet to catch the breaks that Clinton caught. Impeachment is seldom tried, and has never succeeded; the worst-case scenario for Trump, assuming the Mueller Report follows the pattern of Starr’s, may be that it drops soon after 2018 midterm elections in which Republicans are badly bloodied yet hold onto control of Congress. To save itself, the GOP would turn on Trump, unless Trump candidates proved a serious threat to wobbly Republicans in the 2018 primaries. Short of an impeachment scenario, however, a Mueller Report released before the 2018 midterms or 2020 election would be damaging enough for the president and his party to be worth many a seat in the House or presidential elector.

Progressives can ill afford to be complacent, however. Richard Nixon faced an all but uniformly hostile media during the Watergate scandal, and Nixon had been re-elected by such a large landslide in 1972 that the erosion of his support over the next two years was a sign of national repudiation. The major media no longer wield the authority they had forty years ago, and Trump can count on support from right-wing broadcasters. A hard core of Republicans and populist supporters will not desert him, just as they did not desert Nixon—but the difference is that Trump may be more content than Republicans were in the Nixon era to rely on that stalwart minority as sufficient to justify staying in office. It’s enough today for a president to be his party’s president rather than the country’s. (That’s not thanks to Trump: American politics has been drifting in this direction since the Cold War ended.)

Throughout the 2016 election, Trump’s enemies relied on Trump to defeat himself. Instead, he defeated them, despite all his gaffes and controversies. That can happen again. Republicans made the same mistake with Clinton in 1998, assuming the Start Report by itself was enough to doom the Democrats in that year’s midterms—in which, instead, the GOP lost seats. Trump may be in a worse position than Clinton was when his special counsel makes his report, but there is still a difference between injury and death, especially for a dauntless berserker like Trump.

The president’s agenda, however, could well be demolished even if the man himself serves out his term. Ironically, rapprochement with Russia may be one of the long-term casualties of Russia’s interference in last year’s election. Moscow’s meddling did not elect Trump, but it has poisoned his victory and given a gangrenous limb to his administration. Trump has flinched from the amputations and surgeons that would certainly have hurt—cutting off Flynn early on, for example, and leaving James Comey in place—but that would not have hurt as much as what he is apt to face now.

This, then, is what politics will look like for the foreseeable future. The embarrassments will keep coming, and more likely than not, they will keep falling short of proving the case that liberals believe, on faith, must be true. Trump will fight on, and his fighting will both give heart to his supporters and create new tangles and scandals, which will bolster his enemies. The op-ed writers will wring their hands, and Twitter pundits will chirp. The country will survive, though, and may even be stronger for putting its institutions to the test. Trump is creative destruction personified, and whatever his faults, that is something American politics has needed for a generation.