Do You Trust Afghanistan's Anti-ISIS Fighters? 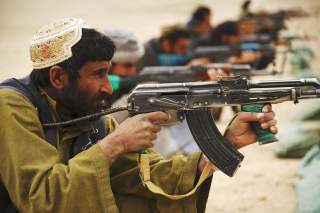 This said, the Afghan government and its supporters face a likely double bind: on the one hand, they have to resist the temptation to support unknown elements that could well be abusive pro-government militias or, even worse, possibly disguised Taliban or groups linked to them, to secure short-term gains against the current threat from Islamic State (which would, however, fuel the insurgency in the long term). On the other hand, and especially in view of the phantom menace of ISIS, inaction or even only hesitating for too long can also have a devastating effect, as this might drive pro-government or neutral elements to the Taliban insurgency too, as hinted at by malek Hoshim.

So in the end, the Afghan government and its international backers might, in the absence of truly noble local warriors, be left with only bad options. However, having only bad options is not necessarily an excuse for doing nothing, just as urgency should not be an excuse for implementing hasty measures which might well result in backlashes. Or to put it otherwise: unlike in a galaxy far, far away, in Nangarhar it is hard to determine who is on the dark side of the Force, and one might wonder if there is a light side at all. But to paraphrase Yoda, contrary to the quick and easy path of the dark side, no one ever claimed that it is easy to do the right thing – especially not in a far, far away war-torn place like Afghanistan.

Franz J. Marty is a freelance journalist based in Kabul, Afghanistan, writing mainly on military and security issues. His articles are regularly published in Jane’s Defence Weekly.