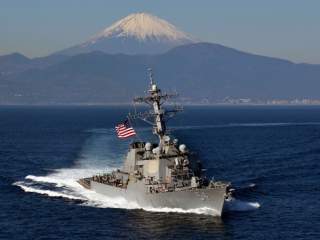 “Free riders aggravate me,” President Obama recently told the Atlantic’s Jeffrey Goldberg, setting off a diplomatic brouhaha as U.S. allies and partners took umbrage—some publicly—at the notion they were dumping the cost of their own security onto Americans. The comments have been read as a rare moment of candor by the president in his final year, voicing long-held but little-discussed frustration over other nations’ lagging or limited commitments to security. The president, however, has not been alone in talking about this issue. One man who might follow Obama in the White House, Republican front-runner Donald Trump, has consistently drawn attention to America’s outsized role within NATO and in other alliances.

“Aside from Barack Obama, Donald Trump and a handful of other people, nobody really seems to care very much,” John J. Mearsheimer, distinguished professor at the University of Chicago, explained at a discussion convened at the Center for the National Interest in Washington, DC, on Thursday. “It’s just taken for granted that free riding happens,” he said. Mearsheimer was joined by Richard Burt, former U.S. ambassador to Germany and assistant secretary of state for European and Canadian affairs, as well as by moderator and National Interest editor Jacob Heilbrunn, in a lively discussion about the future of America and its allies.

Both Mearsheimer and Burt agreed that free riding is much too prevalent and much too little discussed. For Mearsheimer, free riders are a natural consequence of the larger strategy of liberal hegemony that the United States has pursued since the end of the Cold War. America’s belief that it should be the world’s policeman, that it is uniquely deputized to promote democracy and human rights worldwide, inevitably led other nations to lean on U.S. largesse while cutting their own security spending.

For Burt, however, free riders are simply the most visible of several dilemmas the United States has with its allies. For example, America has made commitments of extended nuclear deterrence to some countries that are less credible when geography or conventional capabilities render allies militarily indefensible, he said. Washington has also faced the dilemma of whether to go ahead with military projects supported by allied governments, projects that are seen as boosting security, but are nonetheless opposed by the local populations, such as the U.S. stationing of cruise missiles in Europe in the 1980s. In yet another dilemma, U.S. allies and partners have at times unilaterally pursued their own interventions—“reckless driving,” Burt called it—dragging America into crises of varying degrees (see Saudi Arabia’s current campaign in Yemen, for example). Finally, some allies have drifted, culturally and politically, from where they were when the alliances were first struck—Erdoğan’s Turkey in recent years being a prime example. Each of these legitimate issues should be addressed one by one, Burt argued, without scrapping the whole of American alliance-building efforts.

Both agreed that the free-riding contagion has spread since the end of the Cold War, but diagnosing the problem is only the first step. The panelists quickly turned to what the United States should do in response to its drifting and dissatisfactory alliances and partnerships.

“I believe the United States should adopt a strategy of offshore balancing,” Mearsheimer explained. The United States, he said, has three—and only three—areas of the world that really matter strategically: Europe, East Asia and the Persian Gulf. The singular U.S. ambition should be to prevent any one country from becoming a hegemon in any one of these regions, he said. That’s all. If a country is poised to become a hegemon, it’s in America’s national interest to first have other nations balance against the rising power. If, and only if, this fails, the United States should get involved. “It’s always better to come in later, rather than earlier,” Mearsheimer explained, citing the American experience in the First and Second World Wars as evidence. “You don’t want to go to war unless you absolutely have to.” It’s better, he said, to have countries in each region bear the heaviest costs in lives and treasure of securing their own region.

Here, of course, NATO becomes the sticky issue. Dimitri K. Simes, president of the Center for the National Interest, noted how NATO has inadvertently become something of an interest in itself, and that it was precisely the unrealistic expectations of alliances before the First World War that emboldened countries to ratchet up tensions ahead of 1914. The key question, Simes said, has become how the United States can change its relationship with NATO, a cornerstone of European stability that directly contributes to U.S. security, without creating an artificial crisis on the continent—without “breaking the china.”

The United States, Burt said, must contend with the fact that NATO, the stalwart military alliance of the Cold War, has become something altogether different since the implosion of the Soviet Union. The ambassador explained:

“Rather than dismantle what people will argue is the most successful alliance in history, people had to find new roles and missions for NATO. One of those has become a kind of political mission of democracy promotion. NATO expansion was justified not because of a looming Russian threat. It was seen as part and parcel of this expanding liberal order.”

NATO, he said, “evolved in a kind of unconscious way from being a military alliance to becoming a political project.”

For Mearsheimer, the solution to this NATO problem is clear. “The United States should get out of Europe,” he explained. “We should turn NATO over to the Europeans. I don’t understand for the life of me what we’re doing in Europe. There is no potential hegemon.”

“Russia is not a serious threat,” Mearsheimer continued, noting that its population would decline over the next few decades. “The idea that Russia is the second coming of the Soviet Union and Vladimir Putin is about to create a ‘Greater Russia,’ and he’s about to go on a rampage and conquer this country and that country in eastern Europe, I think is laughable.”

NATO’s steady push eastward in the 1990s and 2000s—and its strategy of doubling down in recent months—has only made matters worse, Mearsheimer argued. “The basic operating assumption of the United States is we are tough, [Putin] is weak, and he’s going to throw his hands up,” Mearsheimer said. This, however, is a sunk strategy. “When you move into a great power’s backyard and start threatening it, it tends to get paranoid. It tends to get really scared. It tends to do crazy things,” he said. “Getting tough with the Russians and putting ships in the Baltic Sea, getting right up in their faces, is just going to lead to more and more trouble. I bet my bottom dollar they are not going to throw their hands up.” Worse, Mearsheimer said, if there is even a 2 percent chance that Russia, feeling deluged all around by NATO, would turn to its nuclear capabilities, then that should be enough for Washington to reassess its approach.

Putin, Burt countered, has been his “own worst enemy” as of late. The Russian economy is stagnating, and not simply due to the collapse in the price of oil and sanctions but also because of mismanagement and delayed reforms. Russia’s focus in recent months on military power can only paper over the worsening economic situation for so long, he said.

But the United States, for its part, cannot ameliorate Russia-NATO tensions by simply adding new forces to Europe. “We need a diplomatic approach,” Burt said, “a competent diplomatic strategy to couple with this new forward strategy of NATO which gives Putin a face-saving way to reduce the tension.” Such a strategy would, the ambassador argued, necessitate ensuring for Russia that Ukraine is not going to become a full-fledged member of the EU or NATO.

What Are the Benefits?

Training a critical eye on the current state of U.S. alliances both in NATO and beyond isn’t simply a matter of fairness and niceties; it’s about best allocating limited resources. “The United States should spend money at home,” Mearsheimer said, “and expend lives only when absolutely necessary.”

“When I go to European airports, and I start thinking about LAX and LaGuardia, it enrages me,” Mearsheimer said. “We have second-world—maybe third-world—airports in the United States. It’s ridiculous. And we’re spending trillions of dollars to fight wars we’re going to lose. We’re spending huge amounts of money defending Europeans who are perfectly capable of defending themselves.”

The problem with implementing Mearsheimer’s strategy, Burt said, is that the United States has created a kind of “dependency culture” within NATO. Burt explained:

“Anybody who thinks that even a gradual withdrawal of American power from Europe is going to lead the Germans to suddenly pull up their socks, spend more than 1.2 percent of their GDP [on defense], and become the pillar of a new European security order, is kidding themselves.”

Such a cultural shift may take fifty or sixty years, according to Burt. “Whether we like it or not,” he said of America’s conundrum, “we have woven ourselves into the fabric of European defense and European security.”