Does America Need New ICBMs (Or Any at All)? 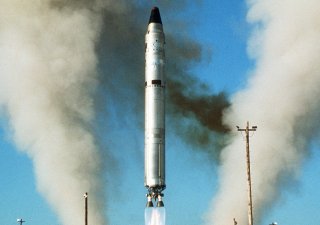 President Joe Biden is expected to submit his fiscal 2022 defense budget request to Congress in May. The ongoing efforts to keep building costly weapons like the F-35 Lightning fighter jets and Gerald R. Ford-class aircraft carriers have been particularly controversial. But another program in development has been grabbing headlines: The Ground-Based Strategic Deterrent (GBSD).

Matt Korda, a research associate with the Federation of American Scientists, joined the Ploughshares Fund’s Press the Button podcast to examine the flawed thinking behind the proposed GBSD. Korda discussed his new FAS report “Siloed Thinking: A Closer Look at the Ground-Based Strategic Deterrent” that reviews the role of intercontinental ballistic missiles (ICBMs) in U.S. nuclear posture.

The Pentagon has brought forward several justifications for pursuing an ICBM replacement program, including that it would be cheaper to develop new missiles than extend the service life of the current missiles, the Minuteman III.

Korda challenges these justifications, stating that the “assumptions appear to have either been flawed or exaggerated. They ended up heavily biasing the Pentagon’s decision to pursue GBSD.” He explains that the Pentagon’s decision to build new missiles was based on maintaining the current ICBM force until (an arbitrary) 2075. According to Korda, “If you select a slightly different time, maintaining the force until 2050, for example, or even till 2100, the calculations changed significantly.” Pursuing a life-extension of the current Minuteman III system would have been the better alternative, deferring a decision on GBSD for two decades and alleviating the pressure on the current defense budget.

The rationale for maintaining ICBMs at all in the U.S. nuclear force has been an issue of controversy. There are several worrisome risks. First, despite ICBMs being portrayed as necessary for deterrence, “They are giant targets in the middle of the country that invite really devastating attacks on us soil,” according to Korda. Such an attack would come with social, economic, and environmental impacts that are obscured by framing the attack as one on sparsely populated areas. In reality, attacks would destroy hospitals, strain the healthcare system, cause food shortages, and disrupt key industries. Second, if ICBMs are launched towards China or North Korea, their paths would overfly Russian territory. This creates serious constraints, and other systems in the U.S. nuclear arsenal are better suited for those targeting missions. Third, because ICBMs have fixed locations, there is time pressure to use them (known as ‘use them or lose them’). In Korda’s words, ICBMs “can bias a president towards launching nuclear weapons very quickly in a crisis.” Hence, a false alarm (as seen in the past) might cause a president to approve a nuclear Armageddon.

Ballistic missile submarines do not have the same time pressures since their locations are unknown. They are the most survivable leg of the arsenal and ensure reliable second-strike force. Korda suggests that the United States could eliminate the ground-based leg completely. Not only are ICBMs vulnerable and costly, but the option for a preemptive nuclear strike is a Cold War relic. Instead, nuclear posture should prioritize the role of the submarines: “The United States could ride out a nuclear attack, accurately assess damage, and still maintain an assured retaliatory capability,” Korda said.

Proponents of maintaining an ICBM force argue that technological innovation could soon threaten the submarines’ capability to stay undetected. Korda explains that these concerns are exaggerated. It is unlikely that all submarines would be detected simultaneously, they are difficult to destroy, and the U.S. has a reliable bomber force as a backup. Further, “the next generation of ballistic missile submarines are going to be even quieter with the introduction of new electric drive propulsion.”

Politicians in the Great Plains in the Midwest are a major reason why ICBMs are still in operation. Senators in Wyoming, Montana, North Dakota, and Utah advocate for missiles in their states due to government infrastructure investments, playing an outsized role in dictating U.S. nuclear force posture. This powerful “ICBM coalition” has blocked Pentagon assessments of possible force reductions and has argued that the development of GBSD would create jobs. However, Korda points to research by the Cost of War project at Brown University: “For every $1 billion that they shift from defense to green energy, you get a net increase of 2,000 jobs.”

Instead of addressing other important security issues, the defense budget is overly focused on the nuclear arsenal. GBSD’s estimated cost is $264 billion throughout its life cycle—money that could be used for the Biden administration’s ambitious domestic agenda, including fighting the pandemic, climate change, or racial injustice. Korda recommends a second, hard look at our national priorities. In the middle of a pandemic and a few months after an armed insurrection, are these missiles the best possible investment for Americans’ security?

The entire interview with Matt Korda is available here on Press the Button. To read the full FAS report see here.