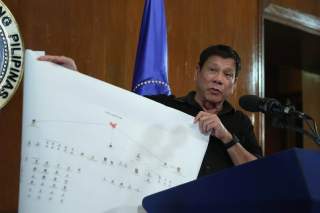 America’s alliance structure in Europe and Asia dates back more than six decades. A few of the smaller, less viable organizations collapsed (CENTO, SEATO), but since the end of the Cold War, Washington has expanded rather than contracted its treaty obligations. That includes in the Philippines, which two years ago approved a new agreement providing the U.S. military with bases and joining in exercises.

Now this alliance might finally be coming to an end.

No one knows what Philippine president Rodrigo Duterte will do next. He makes Donald Trump look like a deep thinker of notable civility and stability. Nevertheless, after spending the last month trashing President Barack Obama, the United States and the U.S.-Philippine relationship, Duterte announced he’d joined the opposing team while visiting Beijing.

America’s relationship with the Philippines always has been complicated. Americans arrived claiming to be liberators, ready to free the archipelago from its Spanish masters. Then Washington used even greater violence to suppress an indigenous independence movement. Several hundred thousand Filipinos died in the ensuing conflict.

Nevertheless, Washington eventually released its colony, and the two peoples fought together in World War II. Although the Philippine government was a model of how not to operate, military ties remained close, reflecting the 1951 “mutual” defense treaty as well as ongoing U.S. troop presence. Eventually rising nationalism, along with an ill-timed volcanic eruption, resulted in the closure of Clark Air Base and Subic Bay naval station.

But only a few years later, the American armed forces trickled back, aiding Manila in combating Islamic insurgents, providing military assistance and arming the decrepit Philippine armed forces. As the People’s Republic of China more firmly asserted its territorial claims, Philippine officials hoped to borrow the American military to confront Beijing nearby, while the Pentagon wanted to expand base access to contain the PRC regionally. It seemed like a win-win—except for the American people, who risked waking up some morning and finding themselves at war with China after a clash between Chinese and Philippine vessels near Scarborough Reef, a useless bit of rock most Americans had never heard of.

Now the seventy-one-year-old former mayor has upset the two militaries’ cozy arrangement. Slaughtering drug users and dealers is criminal, but insulting the U.S. president is even more shocking for most Americans, who are used to foreign dependents exhibiting appropriate deference. American officials seem united by the hope that everything will just blow over, or they will wake up and discover President Duterte was just an unusually frightful nightmare.

Even his own officials did their best to neuter his outbursts. He often contradicted himself—he wanted to keep the 1951 defense treaty while “realigning” the country and suggested that some of his ideas were only for the long term. Some observers theorized that Duterte was only acting crazy, attempting to gain leverage in order to squeeze additional cash out of Washington in return for accepting U.S. military forces. Or maybe Duterte was hoping to win a firmer U.S. commitment to defend the Philippines, including its contested territories, and press China for the return of Scarborough Shoal.

However, he does not seem that organized and calculating. More likely that Americans and Filipinos alike are seeing the real Duterte.

If so, Washington’s plan to expand military cooperation and U.S. use of Philippine territory is dead. American officials might be able to hunker down and preserve the legal basis for the U.S. military’s presence, if not all of the ongoing activities. Then Duterte’s successor could return to usual Philippine form, satisfying U.S. desires.

However, his visit to the PRC suggests that the coming years are likely to be much less stable. In Beijing, Duterte did the full monty in Chinese, so to speak. He proclaimed his Chinese heritage and announced his “separation from the United States.” America had “lost” both economically and militarily, he asserted. Moreover, he stated, “I’ve realigned myself in your ideological flow and maybe I will also go to Russia to talk to Putin and tell him that there are three of us against the world—China, Philippines, and Russia. It’s the only way.”

This is bizarre nonsense. Neither China nor Russia wants to take on the world. They hope to make more friends, especially of states formerly in America’s orbit. And if they are looking for partners, they probably won’t choose a semi-failed state governed by an inconsistent hothead.

However, it is becoming harder for even Duterte’s most loyal aides to walk back his statements. His economic ministers said he only meant he wanted stronger Asian integration, but that is not what he said. Talk of allying with China and Russia against the United States is a lot more serious than seeking investment and trade deals from them.

Duterte may be lucky to last his full term. It’s not clear what he will end up getting from China. Beijing expects to be well compensated for its “assistance,” as a number of African nations have found. Burma’s junta yielded much of its authority to civilian government in part to attract the West to counter the PRC, whose embrace had grown uncomfortably tight. If Manila ends up paying a lot more for Chinese “help” than expected, political dissatisfaction may follow.

So far he remains popular, but the Philippine people are fickle. And the public is overwhelmingly pro-American; more than twice as many Filipinos view the United States favorably than China. Indeed, U.S. Assistant Secretary of State Daniel Russel publicly warned Duterte not “to underestimate the power of the public’s affinity for the U.S.” Posing an even greater danger may be the security establishment, which is heavily dependent on the United States—and has not hesitated to speed the exit of past unpopular presidents.

Rather than hope for a coup lite, American officials should use the Philippine soap opera to rethink their policy of underwriting Manila, irrespective of its policy. Continued defense cooperation makes sense, but that means a much more limited and equal relationship. Washington should terminate the misnamed “mutual” defense treaty and scale back its military presence under the 2014 pact. Certainly no more anti-Chinese military patrols and more limited training activities.

If Duterte is able to peacefully settle the China-Philippines territorial dispute, Washington should be pleased at having one less war contingency to plan for. The United States should not push its client to confrontation and conflict.

On the other hand, if Manila still wants to challenge the region’s rising power, then Washington should suggest that the former build a military capable of doing so. For America to effectively turn the decision for war with a nuclear-armed power over to an unpredictable, irresponsible and impulsive leader of a marginally armed small state would be more than foolish. The United States should step back, prepared to counter any hostile state seeking to dominate Eurasia, while leaving more mundane disputes, such as that over Scarborough Shoal, to the interested parties.

At its most crude, the United States doesn’t need the Philippines. China challenges American domination in East Asia, not security at home. And Manila couldn’t aid Washington in defending the latter anyway. Washington’s influence is not worth courting conflict with a likely great power by attempting to make the archipelago part of a Pacific cordon sanitaire to contain the PRC—especially since Beijing has not threatened any state’s independence, even in its own neighborhood. China’s neighbors, not America, should take the lead in constraining the PRC.

Rodrigo Duterte has inadvertently helped the United States for all the wrong reasons. He seems prepared to end an alliance which Washington should have dropped years ago. It’s an ugly way to do business. But it’s better than forever preserving the failed status quo.