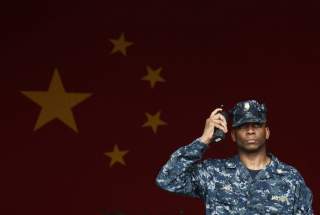 These days, the “China threat syndrome” is everywhere to behold in American political life. A chorus of cheers celebrates the upcoming trade war even though many key American producers, above all farmers, could be grievously damaged. Another group heralds the return of the TPP as the ultimate “aircraft carrier” that will supposedly finally sink China’s brash economic ascent. American universities are said to be under assault by legions of Chinese Communist infiltrators. Beijing is accused of trying to upstage and undermine Washington’s diplomacy on the Korean Peninsula. China’s Belt and Road Initiative, that seeks to knit Europe and Asia ever closer, is viewed as a menace to the “rules based order” and American global hegemony. Beijing stands accused of promoting environmental disasters from Africa to Southeast Asia to the Arctic. What seems to gall American strategists, above all, is that China has dared to set up a string of reef bases in the South China Sea (athwart the most important artery of global trade!) and now appears to be producing warships “like sausages.”

Even if China somehow represented an “evil empire,” (which it emphatically does not as almost anyone who has travelled there in the last thirty years will readily explain), it would still simply be imprudent to alienate the Middle Kingdom in the midst of ongoing severe crises with Russia, North Korea, Iran, not to mention numerous unfinished wars in the Greater Middle East. The cardinal principle of any sound foreign policy—namely prudence—was apparently jettisoned long ago from U.S. foreign-policy deliberations. Never mind that Beijing has not resorted to a large-scale use of force in well over thirty years—a record of moderation unmatched by any other great power. Still, with temperatures heating up in the Taiwan Strait since the mid-March passage of the Taiwan Travel Act, Washington’s many China hawks seem utterly determined to test Beijing’s red lines, perhaps in the hope that it too will dispense with all prudence, so the “bloody business” can commence at last and before China is too strong to counter. This approach, of course, is foolhardy in the extreme.

Let’s all take a deep breath. This edition of Dragon Eye will examine briefly a mid-2017 article from one of China’s official military magazines, The Chinese Air Force [中国空军]. I am not endeavoring to summarize an article about some new Chinese missile that can target U.S. ships. I have done that before many times and one can easily find such articles in the Chinese press these days. Rather, this particular Chinese Air Force article focuses on the heroic exploits of U.S. airmen known as the “Doolittle Raiders” of Pacific War fame, noting that last April was the seventh-fifth anniversary of that epic story from America’s “darkest hour” in early 1942. Led by Lt. Col. Jimmy Doolittle [杜立德], the raid involved the highly unconventional approach of launching relatively large Army Air Force B-25 bombers off of an aircraft carrier on a one-way trip across Japan and into China.

According to this rather detailed Chinese rendering, the raid succeeded in “creating confusion in Japanese strategic plans . . . shifting their strategic direction [打乱了日本的战略计划 . . . 改变战略方向].” In a country now increasingly acquainted with the challenges of carrier aviation, the problem of “launching land-based bombers from an aircraft carrier [让陆军轰炸机从航母上起飞]” is recognized to have been extremely daunting. The article notes that when Doolittle announced to his men that they would embark on the incredibly risky mission and they were permitted to ask for reassignment, that “in the entire unit . . . all volunteered to participate [全部人员 . . . 都表示愿意参加].” It is, moreover, explained that Doolittle faced the agonizing decision about whether to cancel the raid when the USN aircraft carrier Hornet bearing the raiders was discovered too early by Japanese patrols. Knowing full well that he and his men would be in even greater danger as a result of the longer flight and the possible loss of surprise, Doolittle made the bold decision to launch anyhow. The Chinese author seems to write with satisfaction that Japanese air defenses did not succeed in shooting down a single one of Doolittle’s raiding bombers.

With some pride at China’s prominent role in these events, it is noted in the article that sixty-nine of Doolittle’s fliers were saved by Chinese, after the American bombers succeeded in limping across the East China Sea and were forced to crash land—generally in the countryside of Zhejiang Province. While almost all escaped to safety and returned to fight with American forces, eight American fliers were captured and three were cruelly executed by their Japanese captors after a sham trial. However, as this Chinese rendering notes: “The Japanese were outraged at the active assistance given by local Chinese to the fliers and they undertook a frenzied revenge against Chinese soldiers and civilians [日本对中国军民积极救助飞行员的的行动非常气恼疯狂对中国军民进行报复].” The article notes that the Japanese destroyed numerous villages in the area outright, employing “germ warfare [细菌武器]” and killing or wounding 250,000 Chinese. That account is actually supported by documentary evidence from archives that has recently come to light.

The focus of this Chinese Air Force article, however, is not on Japanese atrocities, but instead on the significance of the courage and innovation of the Doolittle raiders. The author observes that the raid was essential to lift American morale [提高了美国的士气] in the aftermath of the unprecedented defeats following the Pearl Harbor attack. The end of the article makes the link between the Doolittle Raid and Japan’s strategic mistake in overcommitting their forces to the risky Midway operation. This Chinese military assessment observes that Japanese naval aviation could never recover from the losses sustained in the Midway battle. For Chinese military strategists, the author sees valuable lessons from studying the exploits of the Doolittle Raiders. The raid is said to be an example of “employing new approaches to cope with dangers [用新思路来处置威胁].” American strategists are applauded for creating a “nontraditional plan [非传统计划]” and, not surprisingly, for exhibiting a “stellar level of leadership [高超的领导水平].” The article explains this leadership allowed Doolittle to train fliers under incredibly arduous conditions (just three weeks) and then to make a decision to go, even when the plan had gone badly awry, forcing the early launch that put all the raiders in even greater peril. This appraisal also gives the U.S. armed forces high marks for undertaking the ultimate joint operation in this case—one that is compared interestingly here to the historical army-navy combined triumph at Vicksburg [密西西比洲的维克斯堡] in the Civil War. It’s safe to say that American aviators have some admirers in the PLA Air Force and elsewhere in China too.

If China is indeed girding for a military conflict with the United States, then this author has not seen evidence of this bellicose disposition. Indeed, it is not hard to find such articles as the one discussed above, wherein the PLA speaks admiringly of American military exploits. Why has American Sinophobia intensified to such a degree? Here, Thucydides may provide the answer as he emphasized the fear that overcame Sparta as it watched the rise of Athens. But American Sinophobia fortunately dissipates rather quickly in the stark sunlight of certain historical truths. There is no arguing with the fact that China was the dominant power in East Asia prior to the advent of Western imperialism, so that Beijing’s aspirations to lead the region are actually not at all anomalous. Moreover, it can hardly be contested that China had an exceedingly rough and painful road—also known as the “century of humiliation [百年国耻],” during its transition to modernity, and thus is entitled to seek credible means of defense and security. Is there anything actually unexpected in Beijing’s attempts to both defend its maritime approaches and simultaneously to regain territory (as codified in the Cairo Declaration) lost in the course of repeated Japanese predations? To my estimate, these rather obvious historical conclusions only reinforce the prescient conclusion that Robert Ross made in the National Interest just a week ago. He said that “proposals for how to deter China, contain China or balance the rise of China and how to strengthen U.S. alliances are illusionary. Rather than hold on to outdated notions of U.S. preeminence, the United States will have to adjust to the new balance of power in East Asia.” Since, as I have noted on more than one occasion, China’s intentions are relatively benign, it should not be too difficult to “meet China halfway.”