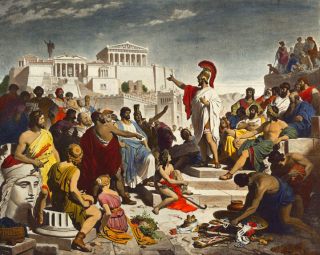 ON A rainy evening along the banks of the Tigris river soon after U.S. forces had entered Iraq and defeated Saddam Hussein’s army, I began to search for one of the U.S. soldiers—a sergeant—who regularly patrolled the streets of Baghdad. He was the tip of a U.S. spear planted in the Middle East. His duty meant encountering face-to-face the political, linguistic, cultural and religious cauldron about which I had to write more abstract reports back to Washington. He had ground truths—albeit anecdotal and his alone—that went beyond the assiduously curated information digitized on my computer screen. He reminded me of the early days of intelligence gathering in the ancient Near East by military scouts of Achaemenid Persia and Alexander the Great. I envied his immediacy. I recalled that the earliest histories of the ancient Near East are preserved in an ancient Greek prose in which the verbs “to see” and “to know” have the same root—a useful linguistic truth for an analyst to remember and a reason for searching out the sergeant.

I caught up with my scout as he was returning from his patrol with the taut expression of a professional operating in a high-threat environment. When the pillars of law and political order crumble to dust in war, it is the soldier on patrol with one leg hanging out of a jeep and a finger on the trigger of his long weapon that fills the space. The burden is visible on each soldier’s face. That night he sighed as he recounted how little communication he had with those locals around him. He pulled out a thin metal extension rod from his pocket and confessed that he often had to resort to threatening people with it to gain compliance from those confused by his incomprehensible commands. He was thoughtful and troubled by his failure and, turning to me, he asked pointedly, “Do you have any suggestions on how this could go better?”

There we stood, the most recent, modern, lawful and civilized invaders of the land between the rivers—Mesopotamia, the Tigris-Euphrates basin—and I, the supposed government expert, struggled to respond. The one thing I knew not to do was to ask him if he was familiar with Michel Foucault—the twentieth-century French social theorist and influencer of academic approaches to the Middle East—a postmodern assault on meaning seemed grossly ill-suited for a soldier in search of understanding. Nor would I ask if he had considered the virtues of aggregating the interests of competing groups within political parties or appreciated the need to develop the organs of civil society between rulers and ruled. Perhaps a reminder of the universal appeal of liberalism and the proven stability and wealth generation of democratic capitalism would serve as counsel for my mission partner. In every potential syllogism, however, there was a disturbing lack of coherence and relevance as we sought to explain the moment in which we were living.

THERE ARE many important approaches to thinking about the Middle East well underway in the public domain, but the use of ancient history to conceptualize contemporary problems in the region has generally not been among them. Scholarly aversion to anything that hints at “Orientalism;” a modest and often shrinking presence within the academy of classics and other disciplines associated with the study of antiquity; a new turn to algorithms and massive data sets; and the general dominance of social science methods in our approach to the region—all have left the study of ancient history on the sidelines of strategic thinking about the contemporary Middle East. The extent of upheaval in the Middle East though requires a reconsideration of these intellectual strictures. It is not sufficient to approach the ferment in the region with only the intellectual tools and constraints of the last century—an era that in many respects no longer exists.

The revival of ancient history as an analytic tool offers the possibility for thinking in new ways about the role of the United States in the region by mapping the ancient communities, identities, and patterns which U.S. policies and actions will inevitably affect. The United States has been engaged in the Middle East since its early nineteenth-century wars with the Barbary pirates, inheriting much of the political and military influence of a collapsing British empire, confronting Soviet regional ambitions in the Cold War and eventually serving as guarantor of the region’s supply of oil to global energy markets. Throughout these two centuries, the United States has rarely had to face directly the complexity of the region’s internal political and religious culture. No longer.

The echo of ancient patterns and precedents has already been audible in the region’s political and cultural trends in the post-Cold-War era. An Arab Egyptian president in 2002, for example, recreated the Library of Alexandria of the third century BC and invited the world to attend its grand opening. Saddam Hussein named his elite Republican Guard divisions after Babylonian kings. The Khorasan region of eastern Iran and western Afghanistan, where the revolt against Umayyad rule in the eighth century began, became a brand label for contemporary Islamic extremists.

The examination of the ways in which the past echoes into the present in the Middle East is to take history as seriously as the peoples of the region do. It means showing deference to the possibility of diverse ways of political organization and expressions of religious identity that are indigenous to the region and not always fully discernible with an analytic tool kit that privileges the political assumptions and analytic methods of the post-Enlightenment world. An analytic method that takes ihtiram (“respect” in both Arabic and Persian) as a starting point also might lead to understanding and policy outcomes for the United States that can endure in the region.

In politics, going back to conceptual beginnings makes sense in a region that is starting anew after a century of ideas, institutions and social compacts have failed or begun to fail. The ancient Greek experience, in particular, offers insights on: how to conceptualize the complex overlay of past, present and future in the politics of the Arab world today; the importance of building citizenship over tribal and clan allegiances; and the primacy of law for a stable political order. The Greeks are well suited for helping us to think about the complexity of the Middle East’s political future because they began their political journey influenced by the civilizations of the ancient Near East, found ways to innovate politically and faced some of the same internal divisions Middle Eastern societies confront.

The region faces the daunting task of developing, adapting or recovering its own set of governing structures and political ideas to make societies, states and religious and ethnic identity cohere enough for the region to recover and advance. According to the medieval Arab historian Ibn Khaldun, human communities of various scope develop when they have social cohesion, or asabiyyah—a bond that inevitably falters and then regroups in a new way under a new political order. It is the quest for new asabiyyah, a binding social compact, that preoccupies the Middle East—a quest that will almost certainly have to take place within the region and on its own terms to be enduring.

THE PATH the Greek world took to arrive at the rule of law and the placing of sovereign power in a popular assembly—albeit of limited male membership—is a tale of kings, aristocrats, blood feuds, persistent conflicts, religion, and only gradual progress toward a stable and freer order governed by law. It is a story of the difficulty of building and maintaining a social compact amid differing groups and coping with foreign influence and invasion. It is a world that would be familiar to the inhabitants of the Middle East today who rebelled against undemocratic rule in the mostly ill-fated “Arab Spring,” became subject to foreign military intervention and fell into various degrees of internecine conflict. The struggle to emerge from conflict by creating institutions that can mediate and claim the allegiance of citizens over tribes and sects was central to the Greek political experience and makes that experience conceptually powerful for understanding the challenges of political development in the Middle East.

Homer is always a good place to begin. The Iliad’s description of the Greek military camp along the shores of Troy includes political processes and nascent institutions that are helpful for conceptualizing change in the contemporary Middle East. This political community—not quite city-state—has political elements of the Greek Bronze Age of Mycenaean kings, the armed aristocracy of the archaic age of the eighth century BC and a foreshadowing of the democratic Greek polis of the classical fifth century BC. In Homer’s poetic conception, the community of Greeks inhabit simultaneously multiple political phases of past, present and future. This is a useful way to also think strategically about the politics of the contemporary Middle East.

Across the region, past identities of religion or empire blend with modern political institutions, ideas and technologies to hint at nascent political futures. Turkey, for example, is at once heir to European ideas and practices of secular nationalism, republican government and industrialization and to the Middle East’s Ottoman Caliphate and Sultanate, Central Asia’s nomadic Steppe warriors and ancient civilizations that projected influence in the Middle East. In Egypt, the patterns and precedents of Egypt’s ancient and medieval histories present a unique combination of political stature, Islamic scholarship and ties to the West that could position Egypt to lead the development of new political thinking in the Arab world. Throughout the region, Islamic extremists, for their part, embrace early medieval battlefield successes to define modern political and territorial goals and rely on the tools of the digital age to achieve such aims.