Does the BJP’s Defeat Mean Victory for Secularism in India? 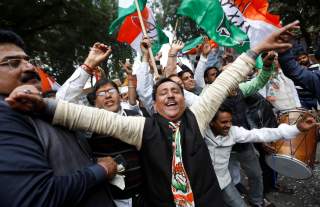 In recent years India has assumed considerable strategic importance in American policy toward the Indo-Pacific (formerly Asia-Pacific) region. This is the result of its growing economic and military capabilities and the perception in Washington that it can act as a balancer to China’s rising power in the region. It is important, therefore, that the American policy community is cognizant of recent developments in India that are important for the future of the largest democracy in the world.

Results of the latest state elections held in five states in November and December portend that the Modi juggernaut has been halted. Indications that this might happen were available in recent by-elections in a few states, including the largest, Uttar Pradesh. The most significant outcome of the most recent elections was the decisive defeat of the Hindu nationalist Bharatiya Janata Party (BJP), which has ruled since 2014, in Rajasthan and Chattisgarh, two of the three states that went to the polls in the Hindi heartland, which forms the BJP’s stronghold. In the third, Madhya Pradesh, although the BJP lost a large number of seats it is just five seats behind the Congress Party, which has fallen short of a clear majority and is dependent on independents and smaller parties to form a government.

These results are very significant as they can be viewed as indicators of what could happen in the national elections scheduled for the spring of 2019. They suggest above all that India’s grand old party, the Congress, which had gone into sharp decline in the past few years, is once again resurgent. Its young president Rahul Gandhi worked tirelessly during the campaign and deserves credit for the party’s rejuvenation. So does the Congress leadership at the state level, especially in Rajasthan and Madhya Pradesh, where the induction of young blood at the highest echelons of the party made a major difference to the mood of party workers and supporters and led to the BJP’s unexpected defeat in its bastion.

However, one must not forget that the Congress’ victory was in large part the result of several important factors that were responsible for the BJP’s debacle. The first was the inability or unwillingness of the party’s governments at the Center and in the states to respond to the sorry plight of farmers who are in great distress. Farmer suicides have been rampant and the Modi government’s ill-considered and poorly implemented demonetization in 2016 hit the rural poor, who live on the margins of subsistence and need cash for daily sustenance, very hard. Hundreds of thousands of farmers from around the country marched on the capital, New Delhi, a few days before the elections demanding that they be heard. All three states in the Hindi heartland are largely rural and agricultural and the farmer’s anger at the BJP government’s lack of concern for their plight translated into votes for the Congress.

The adivasi (literally original inhabitants, that is, indigenous tribes living in the Indian subcontinent from before the Aryan invasion) and Dalit (literally oppressed, the former untouchables of Hindu society) voters also left the party in droves. A substantial portion of these two sections had voted massively for the BJP in the last elections. However, they felt not only neglected but also threatened by the policies of the BJP governments. The neo-liberal policies promoted by the BJP led to the confiscation of tribal lands for so-called “development” purposes. Such policies entailed handing over of land traditionally inhabited by the adivasis to industrial magnates, both Indian and foreign, to build modern industries.

The Dalits felt they were used by the BJP to come to power but then discriminated against by the largely high caste leadership of the party, many of whom believe in the Hindu caste system that relegates the Dalits to the lowest rung of Hindu society and treats them as outcasts. There were massive Dalit demonstrations around the country following clashes between them and upper caste Hindus. The Congress has had a much better track record of responding to the plight of the Dalits going back to the times of Mahatma Gandhi and the freedom movement. Thus Dalit sympathies quickly shifted back to the Congress.

Many analysts believe that the electoral verdict also entails a rejection of the BJP’s divisive Hindu nationalist agenda, which has little to do with the religious tenets of Hinduism. It is a political ideology that advocates that Hindus are the owners of the country and others, especially Muslims and Christians, can at best be treated as second-class citizens. The agitation to build the Ram Temple in Ayodhya at the site of the Babri mosque, which was destroyed in 1992, has come to symbolize the Hindutva program. Hundreds of thousands of devotees were mobilized in Delhi and across the country in the run-up to the elections to mount pressure on what was seen as a government friendly to the cause to construct the temple immediately despite the fact that the issue is under adjudication in the Supreme Court.

This attempt at mobilizing Hindus on the Ram Temple issue to vote in favor of the BJP seems to have failed in the recent state elections but it may still work in the national elections in 2019. The Congress has been ambivalent on this issue; after all, the Babri mosque was demolished in 1992 when there was a Congress government at the Center that refused to intervene even when forewarned that this was likely to happen. To add insult to injury, one of its candidates who recently won in Rajasthan declared during his campaign that only a Congress prime minister would be able to build the Ram Temple in Ayodhya.

In fact, in the run-up to these and earlier state elections, the Congress has been pursuing a “soft” Hindutva policy as opposed to the BJP’s “hard” Hindutva. During the election campaign Rahul Gandhi, the president of the Congress, was busy visiting Hindu temples and publicizing his high caste Brahmin genealogy for electoral gains. This is the first time since independence that the religion and caste of a candidate for the job of prime minister have been overtly portrayed as the defining basis for his claim to lead the country.

Rahul Gandhi’s regional satraps have been even more explicit in emphasizing the Hindu character of the party and their own and their leader’s religiosity by promising to build gau-shalas (cow-homes) in every district to provide shelter to stray cows. They have made such declarations in order to deprive the BJP of its appeal based on its cow protection agenda that has led to the lynching of several Muslims and Dalits accused, mostly falsely, of cow slaughter in BJP-ruled states.

The Congress Party’s soft Hindutva probably helped it marginally in the recent state elections but could prove counterproductive when it is pitted against the BJP in the national elections to be held in the spring of next year. This could be the case because Rahul Gandhi and his advisors are confusing contrived demonstrations of personal religiosity with Hindu nationalism. The latter owes its origins to Vinayak Damodar Savarkar, K.B. Hedgewar and M.S. Golwalkar, who were its founding fathers in the first half of the twentieth century, and not to the religious tenets of Hinduism.

The soft Hindutva strategy on the part of the Congress, based on the precept “if you cannot beat them then join them,” is ceding the ideological ground to the Hindu nationalists by diluting the tenets of secularism enshrined in the constitution. It may finally redound to the benefit of the BJP and this could be proved as early as the spring of 2019 when parliamentary elections are held.

Having lost the recent state elections by its failure to keep its promises on the economic front, the BJP is likely to take increasing recourse to its Hindutva agenda to galvanize support for the party in the countdown to the national elections. It is time that the Congress, in order to unmistakably distinguish itself from the BJP, made its ideological stance very clear and re-emphasized its adherence to the fundamental precepts of the constitution, which are based on the equality of all citizens regardless of caste and creed. Any dilution of its stance on this issue will only benefit the BJP because the Congress’s pale imitation of the former’s ideology will not be able to compete with the genuine article.

The Congress has demonstrated its rejuvenated political strength by defeating the BJP in three important state elections in the latter’s stronghold. This is the right time for its president, Rahul Gandhi, who is seen as a principal architect of these victories, to take a strong and unequivocal position on the party’s commitment to secularism and the equality of all citizens. This is a principle that most Americans hold dear. It would, therefore, also demonstrate clearly the ideological compatibility of the world’s largest and the world’s most powerful democracies.