Does Bobby Jindal Stand a Chance in 2016? 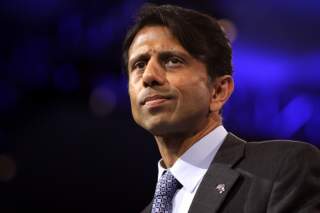 The two-term Louisiana governor and former congressman would deny he has a campaign at all. Jindal's official stance is that he hasn't decided whether to run for president yet. But his eyes are clearly on 2016.

Jindal worked the conservative circuit in D.C. last week. I missed the tour, but people who listened to the governor found him wonky, eloquent—and hard to push off his script.

That's not to say that they found Jindal scripted, like the tired Obama Teleprompter jokes that are a staple of conservative comedy. But he had things he wanted to say, a narrative, and he wasn't going to budge from it for pesky things like questions from reporters.

Understandable, to a point. It's hard to be taken out of context when you provide little else but context. It also limits your potential to create buzz, however, outside the conservative policy journals that have already paid a great deal of attention to Jindal in the past.

One exception was Jindal's call for Muslim immigrants in the West to assimilate, a speech that resonated partly because of his own Indian-American ancestry. The speech was widely panned by liberal reporters, who challenged his claims about European "no-go zones," but well received by conservative activists. If Jindal is to move out of the single digits in polls of Republican primary voters, he'll need to connect with the base more, even if it garners hostile mainstream-media coverage.

On foreign policy, Jindal has been rhetorically hawkish but substantively vague. This seems to be the default position among Republicans not named Rand Paul.

When it comes to domestic policy, Jindal is far more detailed. He has a plan to not just repeal but also replace Obamacare. He has a plan to dismantle Common Core and promote high standards, while at the same time getting rid of the federal government's role in education.

The trouble is that Jindal's plans are controversial, even within the Republican Party. Many fellow Republicans think Jindal's about-face on Common Core—he was once a supporter of the multi-state education standards, which he now likens to the Soviet Union—is opportunistic.

While Jindal's health plan contains many things free-market health-care reformers like, such as capping the employer tax break for health insurance, junking the individual mandate and expanding health savings accounts, unlike some other Republican alternatives, it completely eliminates Obamacare.

In fact, Jindal's health plan is the anti-Obamacare. Obamacare focused on expanding coverage more than controlling costs (and many of its cost controls, such as the Independent Payment Advisory Board, are unpopular with both parties). Jindal hopes to bring down costs first.

The downside of this approach is that it is much more disruptive of existing health-care arrangements. It fails the "if you like your doctor, you can keep your doctor" test. More problematic to some Republicans is that it does not meet Obamacare's coverage baselines. Some people covered under the Affordable Care Act would lose their coverage.

Jindal has come under fire for emergency-room closures in Louisiana. His detractors blame the governor's refusal to accept Obamacare's Medicaid expansion, as many other possible 2016 rivals—Chris Christie, John Kasich, Mike Pence—did. Jindal counters that Medicaid is associated with bad health-care outcomes and state fiscal problems, with the new federal funds not guaranteed in perpetuity.

If anything dooms Jindal's nascent presidential campaign, it will be the number of critics he has in Louisiana. He has openly feuded with Sen. David Vitter, who would like to replace Jindal as governor. He has been blamed for budget shortfalls and locked in Common Core lawsuits with Republican education officials.

It's hard to imagine someone so unpopular with Republicans in his own state winning the party's nomination for president.

Jindal scoffs at this notion, however. "It's easy to be popular as a politician—kiss babies, don't do anything controversial," he told National Journal. "I was elected to make the big changes in Louisiana."

If he runs for president, Jindal will run on big changes at the national level, too. We'll see if a field that includes Jeb Bush, Scott Walker, Chris Christie and leading Tea Party senators will let him.