Does Brexit Mean the West is in Decline? 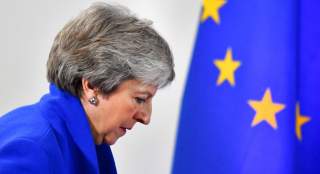 I recall Henry Kissinger making a speech in London in the late 1980s. He started by saying that when Adam and Eve were expelled from the Garden of Eden, Adam turned to Eve and said, “You know my dear; we are living in an Age of Transition.”

That can be said of any period but, by any standards, today’s world is exceptional.

My own country, the United Kingdom, will, in May of next year, leave the European Union, which it has been a part of for almost half a century. The outcome remains unclear, but we know that the future will not be what it used to be.

The United States is experiencing the presidency of Donald Trump, an administration unique in almost 250 years of American history.

China has ended a thirty-year period during which the United States was the world’s only superpower. Whether it will challenge the United States for global supremacy will have consequences not just for those two countries but for the world as a whole.

In Russia, for better or for worse, we have seen under Vladimir Putin, the end of the global impotence it has experienced since the collapse of the Soviet Union. It may not be a superpower like the Soviet Union, but it cannot be ignored.

Are these developments disparate and accidental? Or is there a common thread? To understand this better one must go back to 1989 and the fall of the Berlin Wall. It is remarkable that that occurred exactly two hundred years after the fall of the Bastille in 1789, which ushered in the French Revolution.

In reality, what happened in and after 1989 was not one event but three historic events linked together; and they came with multiple consequences.

First, there was the end of the Cold War, the global struggle between the Soviet Union and the United States, which could have led to World War III and a nuclear holocaust. Today Russia is aggressive, but Putin does not seek to replace the United States as the global superpower.

Second, there was the end of the ideological struggle between communism and capitalism. Communism collapsed because it could not deliver a level of prosperity that came anywhere near to that taken for granted even by people of modest means in Europe and North America.

It was remarked that communism only worked either in heaven where they did not need it or in hell where they had it already.

Today capitalism and market economics are applied throughout the world even if, in the People’s Republic, they are applied “with Chinese characteristics.”

The third consequence of the events of 1989 was the collapse of Europe’s last empire, the Russian Empire. The USSR imploded into fifteen separate states. Today Putin presides over a Russia with borders that have been pushed back and are now similar to those governed by Peter the Great in the 1720s.

That is why Putin, even before he became president, remarked that the collapse of the Soviet Union was the greatest geopolitical disaster of his life. His nostalgia was for the Russian Empire and not for Soviet communism.

The Russian Empire was the last to disappear but that was because it was a different kind of empire to those that had emerged elsewhere in Europe. The British, Spanish, Portuguese, French and Dutch states became empires by conquering territories in Asia, Africa and the Americas. When these colonies and dependencies won their independence, their success reduced the prestige and global power of those countries.

But the British, French, and other states did not feel any more insecure because they no longer controlled parts of Asia or Africa. Russia was different. It had, as a seventeenth-century state, few natural borders. It expanded its territory in order to enhance its own security and, like the Romans, had to keep expanding in order to protect its earlier conquests.

It has been remarked that whereas Britain had an empire, Russia was an empire. Our struggle with Putin today is because of his desire to win back some of that lost territory, and to dominate what he cannot recover and chooses to call Russia’s near abroad.

The consequence of the dramatic developments after 1989 was, for Europe and for the world, the end of ideology but not the end of history. The reality often is that as one door closes another one slams in your face! Over the subsequent years we have seen the growth of populism, nationalism, and a new generation of authoritarian leaders.

At the turn of the century it seemed that globalism, democracy and liberal values had been triumphant. But just as the Reformation led to the Counter Reformation in the sixteenth century we are now experiencing a reaction. That does not mean the world is going back to where it was. It may mean that it has moved two steps forward and is now moving one step back.

Whatever the merits of Brexit it cannot be denied that the United Kingdom is about to move back as it leaves the European Union.

Many wonder why, when Euroscepticism is to be found throughout Europe, the UK is leaving the European Union—alone.

There is a reason. It has got little to do with isolationism, nationalism or nostalgia for the British Empire. It has everything to do with Great Britain’s historical experience and its island geography.

The twentieth century was terrible for Europe. Not only was it the cradle of two world wars. Almost every continental European country saw the destruction of its liberty, in some cases for generations. Germany had Nazi tyranny; Italy had Mussolini’s Fascists; Spain, Portugal and Greece suffered under dictatorship. Poland, the Czechs, and all the countries of Central and Eastern Europe were kept under Soviet political and ideological control for almost half a century. France, Belgium, and the Netherlands—as well as parts of Scandinavia—were conquered and occupied by Hitler during the World War II.

The European Union was not just created to ensure that never again would the nations of Western Europe go to war with each other. It was also created to bring about a new Europe that embraced democracy and the “rule of law.” Many Europeans have accepted a reduction in their sovereignty and a growing supranationalism, a European currency, an end to control of national borders, and other aspects of European integration. They agreed to these changes not just because the outcome was desirable but because it was worth paying any price to ensure that they never again lost their liberty or were governed by tyrannical regimes.

Such considerations are respected by the British public but do not carry the same weight as a reason for the UK transferring powers to Brussels. Britain has been a very lucky country. It is an island nation that has never been conquered or invaded since William the Conqueror in 1066, almost a thousand years ago. Its parliamentary system and rule of law have not been destroyed since Oliver Cromwell in the seventeenth century.

As a result, you cannot persuade the British public (no more than you can persuade the Swiss) that sharing sovereignty on domestic issues is anything other than a loss of self-government and accountability unless there are major benefits that would fully compensate for it.

These benefits must be real and not just theoretical. Thus, Margaret Thatcher was prepared to reduce the sovereignty of Britain to help create the internal market in the EU. Likewise, the UK did not have the same problems as the French in allowing the United States to have command of all forces allocated to NATO in peacetime. In both cases a degree of supranational jurisdiction was seen as sensible.

General de Gaulle was right when he said while vetoing Britain’s membership of the Common Market in the 1960s: “Of course Britain is a European country, but it is a different kind of European country.”

Now that Britain is to leave the EU one of the most important challenges is to ensure that the UK, France, Germany, and the rest of Europe continue to work together on major issues of foreign policy. To date, the negotiations have been about trade, budgetary issues, and the rights of EU citizens in the UK after Brexit. These are important issues. But Europe’s contribution to global foreign policy is what the United States cares about—and the rest of the world will notice.

I voted Remain in the referendum because I was concerned that the fragmentation of the EU might weaken Europe’s voice in the wider world. That could still happen, but we must ensure that it does not.

When the British prime minister says that Britain is leaving the European Union—but not leaving Europe—that is not empty rhetoric. For the last three hundred years, long before the EU was created, Britain, despite being an island offshore to the rest of Europe, has always joined with other European nations in resisting tyranny.

Napoleon hoped that Britain would remain neutral when he set out to dominate Europe. Instead, Britain was his principal foe until his defeat at the battle of Waterloo. As William Pitt said in 1805 “England has saved itself by its exertions and will save Europe by its example.”