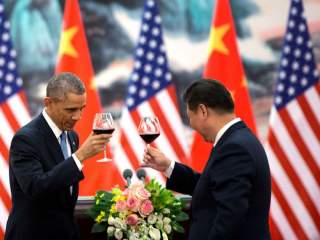 At a conference in China recently, a Chinese scholar seated next to me made the following ominous comment: “The United States is building up its alliances to surround and contain China. But China can also build up alliances to counter the United States.” Many Western strategists are, of course, dismissive of such warnings, on account of Beijing’s long-touted conviction that alliances are outdated and irrelevant. To boot, those states closest to Beijing, such as Pakistan, Laos and North Korea, are not particularly powerful and may form more of a burden than a benefit to Chinese foreign policy. But as a recent article on this forum illustrates, some major Chinese academic strategists continue to advocate for a change in China’s approach.

Further evidence of an intensifying debate in Beijing foreign policy circles is a December 2015 article in the important Chinese journal Chinese Foreign Policy (中国外交). Written by China Academy of Social Sciences researcher Xu Jin (徐进) the article merits a closer look because it was the volume’s lead paper, implying the argument has already garnered some significant support. It turns out, however, that the piece is being republished after appearing originally in another journal, once again underlining its importance. The title of the piece is simply “Why China Rejects Alliances” (当代中国拒斥同盟心里的理由), and the argumentation is clear in the very first sentence, when the curt question is answered. China rejects alliances, according to Xu Jin, because of a “few misunderstandings.”

Xu begins his argument with the bold statement that “Looking around the world since 1648, there has never been another single great power that pursued a policy of rejecting alliances” (不结盟). He admits that this policy frequently affords Beijing greater flexibility, but he also believes that China may be viewed by certain countries as “evading responsibility” and “unreliable.” He then proceeds to outline several misconceptions that he claims are held by the Chinese foreign policy elite with respect to alliances.

First, he says that they fail to understand that an alliance is not the same as friendship. He explains the essence of an alliance actually revolves around common interests and goals. Thus, Xu cites U.S. relations with Saudi Arabia as a legitimate alliance, but one that governs a broader relationship that is “neither hostile nor friendly” (非敌非友). A second misunderstanding reflects the apparently common conviction among Chinese scholars that an alliance must imply a full spectrum of cooperation. Here, Xu presents as an illustrative example the U.S.-French and even the U.S.-UK relationships, wherein he suggests there have been frequent disagreements, with the Europeans often pursuing their own independent approaches. Directly criticizing major Chinese foreign policy thinkers like Liu Jianfei (刘建飞) of the Central Party School, Xu contends that it is nonsensical to say forming alliances reflect a “Cold War mentality.” Rather, he says, countries have been making alliances for thousands of years, so that line of thinking does not correspond to an accurate reading of the historical record.

A fourth assumption that Xu attributes to the conventional rejection in Chinese foreign policy of alliances is the notion that seeking out alliances represents a weakening of national sovereignty, with a commensurate loss of flexibility. He suggests that even in the close alliance between Tokyo and Washington, the United States has retained significant flexibility, as demonstrated by Henry Kissinger’s secret trip to China in 1971 or by Washington’s somewhat “murky strategy” (模糊战略) toward defending the contested Senkaku/Diaoyu islets. Xu ultimately concedes, however, that a price may indeed have to be paid in terms of flexibility and sovereignty. He argues that sometimes circumstances are such that “two countries understand that if each depends only on their own capacities, there would be no possibility for them to realize the goal of seeking gain and avoiding harm” (双方都知道单靠自己的力量已经无法达到趋利避害的目的).

A final sacred cow of Chinese foreign policy assumptions with respect to alliances that Xu confronts is the notion that China should treat all states in the exact same way. He explains that since the 1980s, Chinese foreign policy has “watered down any notion of friends and enemies” (谈话敌友理念). He then compares relations between countries to simple interpersonal relations. “Could a person recognize and develop friendly relations with all other people?” Xu asks, and then answers: “Obviously, that is not possible.” He then states emphatically that Russia and Pakistan have a certain friendly and helpful disposition toward China, while Japan and Philippines certainly do not. He then warns: “Countries that are engaged in strategic confrontation with China should not be treated with kindness.” An implication of this argument may well be a more realist, hard-headed disposition in Beijing, which could even entail the formation of new, countervailing alliances.

The end of Xu’s article has a rather detailed analysis of the Sino-Soviet dispute that developed in the late 1950s and nearly resulted in a war between Moscow and Beijing in the late 1960s. His focus on that history seems wholly justified, since he maintains that this is the preeminent case in the minds of Chinese foreign policy analysts when they think about an alliance gone dreadfully wrong. He points out several reasons for the steady decline of the Sino-Soviet alliance under Nikita Khrushchev and Mao Zedong. First, Xu cites “leadership personalities” (领导人个性) as a significant problem for managing the erstwhile alliance, but he also discusses “ideology” and “the lack of experience in both countries in managing such an alliance.” He argues that these factors are not likely to inhibit China’s ability to manage alliances in the future. Thus, he thinks Chinese diplomacy going forward will be pragmatic, and thus “will forgo participation in such a type of ideological alliance” (不会参加一个意识形态同盟).

In a final demonstration of intellectual boldness, this Chinese scholar calls on Chinese foreign policy elites to study Western practice with respect to alliance formation. He observes: “From now on, China has to study how to lead other people. Leading the world, however, is no easy feat. In that respect, we had better study the experience of the British and the Americans.” He further states that “as an alliance leader, the United States was quite a bit more lenient than the Soviet Union, and its leadership practice proved wiser.”

At the end of the article, the clarion call for alliance building and leadership is substantially reigned in. Earlier in the piece, Xu had noted that more than thirty years of steady economic growth show that the disposition to “reject alliances” (不结盟) under Deng Xiaoping’s famous dictum to “conceal one’s strength and bide one’s time” (韬光养晦) has enjoyed significant success. He contends that Beijing’s current inclination to form partnerships (结伴), rather than alliances, suits China’s current circumstances. However, Xu is quite clear that he doesn’t want alliances, as a tool of diplomacy, to be taken off the table of China’s future options.

One cannot be entirely pessimistic reading this innovative article, which demonstrates a dynamic debate underway among Beijing’s academic strategists. Moreover, it is rational and relatively moderate in its tone. The author demonstrates plenty admiration for American diplomacy and, especially, the United States’ management of alliances. Nevertheless, such a line of argumentation could encourage strategic pessimists in Beijing to push for creation of a genuine alliance, encompassing such important powers as Russia and Iran, for example. That would be an alarming development for the world order, to be sure. Those thinkers on both sides of the Pacific (and the Atlantic for that matter) concerned about preventing a new Cold War from taking shape need to take steps to arrest such disturbing tendencies.