Does Christianity Still Have a Chance in Kurdistan? 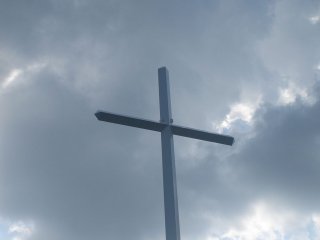 “Stay on the path,” our companions remind us every few minutes as we pick our way along streets made nearly impassible by piles of rubble, tangled wire, chunks of metal and indeterminate mountains of debris, all of it swimming in the mud of intermittent downpours. “And don’t step through any doorways. And don’t go into any houses.”

It’s really not necessary to tell me that more than once. I am not anxious to encounter one of the mines or booby-traps maliciously left behind by ISIS when the Peshmerga reclaimed this little piece of Nineveh province. We are here to assess the likelihood that residents might be able to return to some of the towns they abandoned when ISIS came. For this town, Batnaya, the answer is obvious: it is permanently uninhabitable. Once a tidy little town with shops, schools, homes and farms, and with an ancient history – it was founded by the Medes in the sixth century AD – today every structure is smashed, broken and destroyed beyond the possibility of repair. One will need to clear everything, and start from scratch. Only one structure rises, tall and weirdly intact, from the middle of the wreckage: the church, to which we now are headed. No, it wasn’t some biblical miracle. Or perhaps, yes, it was, the dark miracle of the attackers’ hubris: ISIS kept the church whole because they intended to convert it into a mosque. In the interim, they used it as their base, and also as their bastion. Reaching the churchyard, we find stacks of homemade rocket launchers and on the wall, a targeting guide, three upward arrows to assist in calculating the degree of launch. There are other signs of this hateful occupancy as well: black charring on the vestry wall from some sort of bonfire, and graffiti, lots of it, denouncing the Christians, the Kurds and the Peshmerga. Our Peshmerga escorts translate: “Who is the best friend of the Jews? The Peshmerga. Who is the support of the Christians? The Peshmerga. Who serves America? The Peshmerga.”

Inside the church, all is desecration – smashed statues, burnt and torn bibles, children’s catechisms. And more graffiti. My eye comes to rest on two messages in German, my own mother tongue. “Oh slaves of the cross, you don’t belong in this Islamic land. Leave, or we will kill all of you.” “Oh you shit slaves of the cross, we will kill all of you. This land is Islamic, dirt like you does not belong here.” For a moment I am lost in semantics. Young German jihadists were among the occupiers, that much is clear. I look around – nothing in English, so the intention was not to leave behind some polyglot messages. In these inscriptions, the German is flawed, and the tone has a sort of hip, rap feeling to it; I can almost see them, young diaspora men from Berlin or Cologne, born there, raised in some underclass neighborhood, bored, angry. Maybe at home they spoke a bit of North African dialect Arabic, or Turkish or Urdu, but if they want to write they are obliged to express themselves in the bits of German their teachers managed to impart – never guessing to what use their teachings would one day be put. Now, presumably, the young men are in Mosul, readying themselves for the final big battle, whiling away the hours and ramping up their courage with further braggadocio smeared on walls.

As for the citizens of Batnaya, they too are waiting for the impending battle of Mosul to finally bring clarity. Meanwhile they have found refuge in Al Qosh, the nearest majority-Christian city and home to the diocese. Al Qosh is 33 miles from Mosul, and in this remaining stronghold of Mesopotamian Christianity, life goes on. On the main road, we are greeted by a “Welcome to Al Qosh” sign with a smiling Kurdish man and woman in national dress. Next we pass a playground with a huge ferris wheel, now unoccupied due to the rain that is once more sloshing down. The weather has also interrupted the erecting of Christmas decorations in the park across the street. The city is nestled up against a mountain; halfway up the slope, an electric silhouette of a Christmas tree and above that, a large cross blink in bright white neon through the fog.  “When ISIS came, some said that maybe we should stop illuminating the cross,” Father A. explains. “But we decided not to do that.”

It’s not swagger, just determination. In the same calm tone, he informs me that he owns three guns and knows how to use them. OK, there’s satisfaction in his voice when he explains how he helped the Peshmerga clear mines by detonating them, using the church’s generator. Christianity in Kurdistan may be embattled, but it’s fighting back.

Once at the church, our wet and straggly little delegation – a retired U.S. general, a medic, a former Hollywood actor (with the soap opera Dallas and a James Bond film on his credits) who is now in the NGO world, and me, plus a handful of Peshmerga friends who offered to escort us – is received by the bishop and two of his priests. Besides absorbing and somehow managing to care for the thousands of refugees from the surrounding villages and towns, they are also the custodians of the Al Qosh synagogue, just steps away, which their predecessors volunteered to protect when the last Jews left the area. This is the frontline not only for Christianity in Mesopotamia, but also for its history as the cradle of religions, as a place where Christians, Jews and Muslims once lived as friendly neighbors. This is not an idealistic vision imposed by our outside lens. You can still see it in the relaxed manner in which the Peshmerga now sprawl in the bishop’s receiving room sipping his tea, in their banter with the youngest priest, in the dismay on their faces when they saw the beautiful interior of Batnaya’s church desecrated into stomped bits of plaster, the Virgin minus her head and hands, the hateful threats. The goal is to defeat ISIS, yes. But the goal is also to have the remaining Christians stay, and not disperse into Western Europe or the Americas, to not allow ISIS, even in defeat, to change the face of Kurdistan.

So we are next taken to Telaskov, where the goal of holding fast to a multifaith Kurdistan still has a chance. Telaskov translates as “Bishop’s Hill.” Formerly home to eleven thousand people, it was a thriving, modern town, and a drive through its abandoned streets reveals bus stops surrounded by brightly painted benches, parks, coffee shops and modern apartment complexes. In 2014, ISIS advanced and the population fled. The Peshmerga, supported by armed Christians, were able to retake it quickly, which accounts for the comparatively light damage it suffered. But the front line to Mosul is a mere ten-minute drive from here; also, ISIS had sufficient time to booby-trap and mine the houses before its retreat. So the city remains abandoned, a ghost town, the set of an action movie gone wrong. Still, this is a town that can one day be revived. It won’t require that much. Cleanup, yes, including de-mining. And the restoration of infrastructure. Of special importance: medical care. Without clinics for emergencies, without provisions for pregnant women and children, families will not return. This would not, in the grand scheme of things, require much of an effort from the outside world. A half dozen mobile clinics that can later be converted into permanent installations, medicines, some volunteer doctors and nurses to get things started. Will that happen?

The usually intrepid Father A. is unsure. “We do feel abandoned,” he allows. Well, that’s not just an understatement and not just a feeling; that’s a hard fact. Batnaya, Telaskov, Turkaev, Bakova, who in the West has even heard these names? Yet these were flourishing Christian towns of thousands, the bedrock of Christian history. And these are the people who are holding the line, at immense cost, against the terrorism and the grandiose violent fantasies of an aggressive radical Islam.

Isn’t this the season when Christians remember Mary and Joseph, homeless, driven out? As I trudge through Batnaya, I can practically feel my long-slumbering Catholicism un-lapsing. I feel like showing up at midnight mass in Washington or Berlin, waving those pictures of Jesus with the ISIS boot marks on them that I salvaged from Batnaya, yelling at the startled congregation to wake up and pay attention because their brothers and sisters are in the direst peril. And this is not the time to eat cookies and light candles, it’s the time to take action. And that aside, we’re still left with the geopolitical aspect. Whether or not Christians will be able to stay in their homes in the Middle East isn’t just a question of religion, not just a question of keeping down the numbers of refugees by helping people stay in place; it’s a matter of what societal vision will win the day. Will it be the Kurdish vision of peaceful and friendly respect among neighbors, of a shared beloved homeland in which there is room for differences of belief and practice? Or will it increasingly be a region where others are dirt and disputes are solved by genocide?