Does France Have the Master Plan to Defeat ISIS? 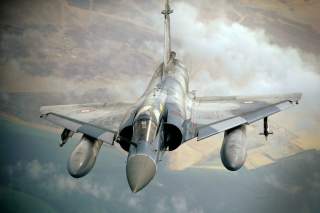 Early last year, France intervened in Mali against Al Qaeda’s North African affiliate. They struck the jihadist groups violently with airpower and special forces, and then chased them out of the country with ground troops. To keep costs down and avoid an insurgency, after their initial operations, France gradually reduced its forces as an international, follow-on force flowed in.

The French strategy stopped a jihadist insurgency from taking over all of Mali, ejected the jihadists from the country almost entirely, and struck a major blow to their ability to threaten both the region and France itself.

In short, the French achieved on a smaller scale something very similar to what U.S. strategists hope to achieve now with operations against ISIS. The challenge in Mali was far less complex than any operation against ISIS will be, but French success nevertheless has some important lessons for U.S. debate about how to deal with ISIS today.

First, the French demonstrated that modern military forces can defeat—often fairly handily—insurgent groups that seek to fight like conventional forces. The French killed hundreds of jihadists in a few weeks, destroying the infrastructure that they had worked to build for years. This seriously undercut jihadist capabilities.

The United States and its allies have good reason to expect broadly similar success in the early stages of a similar strategy against ISIS.

Second, ground forces were an important part of French success. To be sure, airpower and special forces played a critical role from the first days of the operation. France flew daily strike missions with Rafale and Mirage 2000-D fighters, primarily from Chad, destroying enemy training camps, munitions depots, logistical hubs and other infrastructure. Small French special-forces teams simultaneously conducted behind-the-lines raids that destabilized and set the jihadists back on their heels. However, ground forces were also essential. As special-forces teams hopscotched across the jihadist-held territory, regular French ground forces massed in Bamako. Within days, they began a pell-mell drive into the jihadist regions, quickly securing Timbuktu and other major towns as their foe retreated back into the desert. Less than two months later, French ground troops went boulder-by-boulder to hunt out any remaining jihadists from their hiding places in the searing heat of the desolate Ifoghas mountains along the Algerian border.

Third, an international stabilization force has played an important role in securing the gains the French had made and allowing them to draw down and focus their resources elsewhere.

From the start of their operations, French planners had rightly considered the likelihood that their initial successes could quickly sour as remaining jihadists melted into the woodwork and began plotting insurgency. The specter of the Iraq, Afghanistan and Libya conflicts loomed large in their thinking, as they do for those debating strategy against ISIS today.

The French answer to this problem was to transfer responsibility for stabilization operations to a UN-led international force as early as possible. The UN force was difficult to organize and has performed imperfectly, but it is now in place and has allowed France to draw down in Mali and focus on chasing down the remaining jihadists now dispersed across the broader region.

Although its operations were highly successful by many measures, France has not eradicated the problem of Salafi jihadism in North Africa—not by a long shot. Jihadist groups are still strong and have taken advantage of the security vacuum in Libya to survive, shifting their focus elsewhere in the region to Libya itself and to Tunisia.

As a result, the French have deployed a new operation, which goes by the name Barkhane, involving troops across a much larger swath of North African territory. This operation will likely last several years. So will any successful operation against ISIS.

Fifth, the longer-term French commitment is not an indicator of a failed strategy.

That French forces are still in the region should not be viewed as a failure, so much as a sign of French commitment to tackling this problem, which by its nature is long term. Similarly, when it comes to ISIS, getting U.S. forces out quickly should not be made a litmus test of a success.

Christopher S. Chivvis is a Senior Political Scientist at RAND, and the author of Toppling Qaddafi, and is completing a new book, Wildcat: The French War on Al Qaida in Africa.