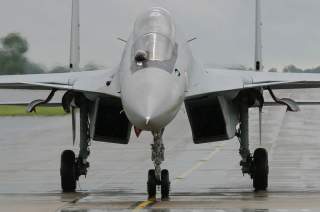 At one point in the movie Beaches, Bette Midler's rather egotistical character C. C. Bloom inquires: "But enough about me, let's talk about you. What do you think of me?" In Beaches, it was all about C. C. Bloom.

It's all about China in Asia these days. But enough about China and its dominance of the headlines. Let's talk about India. What does India think of China?

One thing is clear: Indians do think about China, which has steadily expanded its strategic footprint in the Indian Ocean. And they worry about Asia's would-be Big Brother. Indian strategists see ulterior motives at work even in such nondescript endeavors such as the counterpiracy mission in the Gulf of Aden, where by most accounts, the People's Liberation Army Navy (PLA Navy) has been a valuable partner. Angst-ridden words have issued from New Delhi at times. Yet Indian leaders have modulated their rhetoric in recent years. They appear increasingly comfortable with the strategic outlook in South Asia. Anxieties have receded, though they haven't evanesced entirely and probably never will. And the leisurely pace (and fitful progress) of India's naval and military buildup belies any worried talk from officialdom.

That's all good. All in all, New Delhi's more relaxed attitude toward Chinese naval expansion fits the strategic circumstances better than the anxieties of a decade ago. Then, Indians saw a Chinese naval juggernaut barging into their maritime environs, ringing the subcontinent with a network of hostile naval bases, and assuming command of Indian Ocean waters and skies—to the detriment of Indian primacy. Now, they seemingly understand that India commands enduring advantages in nearby seas and skies, never mind that it remains weaker than China by economic and military metrics; that Beijing has challenges aplenty to occupy its military resources in the China seas, and less to spare for South Asian adventures; and thus, that any truly menacing Chinese naval presence remains far off in the distance. Sobriety prevails.

To track the evolution of India's posture, consider the Strange Case of China's String of Pearls. Ten years ago, the defense consultancy Booz Allen compiled a classified study for Secretary of Defense Donald Rumsfeld. Titled Energy Futures in Asia, the study garnered instant fame when it went public in 2005. Why? Because the study's framers hit upon a catchy phrase for Beijing's ambitions in the Indian Ocean. China, they opined, was pursuing a "string-of-pearls" strategy along the southern rimland.

Its goal: to gain access to port facilities in countries such as Sri Lanka and Pakistan for merchantmen and PLA Navy warships. China courted diplomatic ties with South Asian governments, bankrolled seaport development at sites such as Gwadar in southwestern Pakistan, and proffered economic and infrastructure assistance of various types to sweeten bargains for access—and in turn for energy security. Such overtures appeared ominous to Indian strategists who worried that China would assemble a network of full-blown naval bases to project power into South Asia—much as Western sea powers did during the heyday of imperialism.

Now, from a strictly Mahanian standpoint, this was cause for alarm. Naval sage Alfred Thayer Mahan made naval stations one of three pillars of sea power, something any seafaring state must obtain to carry on foreign commerce and command distant waters. Bases provide forward-deployed vessels and aircraft fuel, ammunition, and spare parts, execute repairs and upkeep, offer venues for crew rest and relaxation, you name it. It's hard to project—and sustain—power across thousands of miles without such outposts. The United States has ruled Asian seas and skies for seventy years, in large part because of bases such as Yokosuka and Sasebo in Japan. Indians fretted that a predatory China might replicate this feat in South Asia.

China has grown far stronger since the Booz Allen report, yet India has mellowed. Why? Because some elemental facts about strategy, hardware, and tactics have sunk in—and prudence with them:

- One, India is the home team in any Sino-Indian contest. India is closer to likely theaters of action, boasts more manpower and bases, and knows the physical and cultural terrain better than remote China does. It can deploy the logic of access denial to curb Chinese inroads in the Indian Ocean—much as China has employed this logic to inhibit America's freedom of action in East Asia.

- Two, New Delhi isn't alone in the nautical competition. Strong seagoing states like Japan, Australia, and of course the United States have a stake in deterring Chinese aggression in India's backyard. Beijing's provocative actions in the East and South China seas supply an adhesive for a balancing coalition, portending what could come to be in South Asia. New Delhi can tap the potential for coalition-building, supplementing its strength with that of likeminded sea powers.

- Three, a string of pearls isn't as fearsome a thing as it appears when plotted on the map. It looks solid, unbreachable. At its most worrisome extreme, though, an array of Chinese bases would amount to a thinly fortified defense perimeter around the region's natural hegemon. No island chains occupied by competitors lie off India's shores, as they do off China's. No force can be strong everywhere. Absent geographic strongpoints, it would be fairly straightforward for the Indian Navy and Air Force to puncture any Chinese defense perimeter at one point or another.

- Four, not only does India command a central position in the region, astride sea-lanes leading to and from the Persian Gulf—sea-lanes that preoccupy an energy-import-dependent China—but it holds geographic strongpoints of its own. The Andaman and Nicobar Islands, for instance, stand athwart the western approaches to the Strait of Malacca. The Indian military can position surveillance assets and antiaccess forces along the island chains to deliberately compound the "Malacca dilemma" of which China's leaders have spoken. It can balk any overweening Chinese pretensions.

- And five, the Indian military holds certain advantages over even a bigger and better-resourced PLA. For instance, U.S. Air Force airmen who have fought against the Indian Air Force in simulated combat rave about the skill of their Indian counterparts. The Indian Navy has operated aircraft carriers for decades and will not face the steep learning curve the PLA Navy faces as it experiments with operating jets from floating air bases. If commanders leverage such niche advantages effectively, they can hope to outmatch a PLA operating far from home.

The hazard in India's newfound prudence is that it will lurch to the opposite extreme, complacency. Not every home team wins. Faraway powers sometimes take command of local defenders' surroundings—witness the longstanding U.S. predominance in Asia. Over the past two decades, Western analysts have continually lowballed China's capacity to assemble strong forces. New Delhi could do the same—and find itself outmatched in its own backyard. Striking a balance between urgency and hubris, it appears, is the task that Indian officials face. Apathy is a sin to avoid.

James Holmes is Professor of Strategy at the Naval War College and coauthor of Red Star over the Pacific, just out in Mandarin from the Chinese Academy of Social Sciences. The views voiced here are his alone.